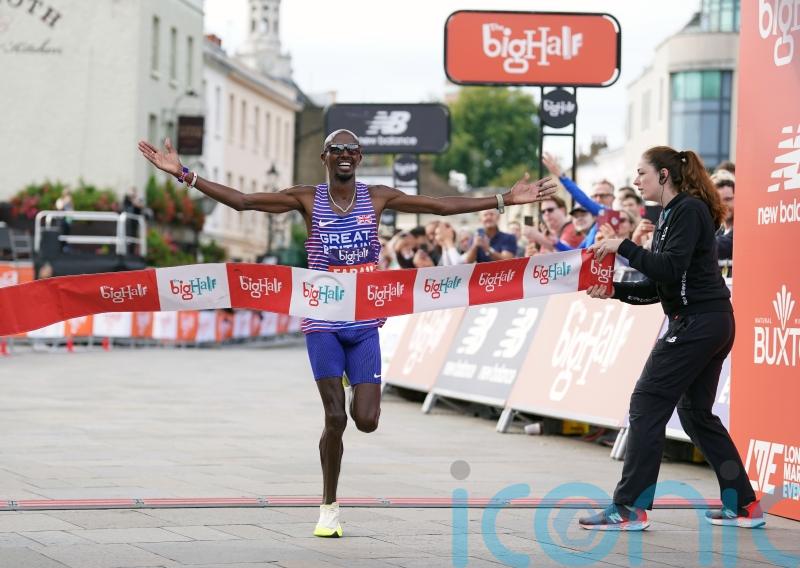 Sir Mo Farah enjoyed a timely return to form ahead of next month’s London Marathon with a third victory in the Big Half.

The four-time Olympic champion suffered a shock loss to club runner Ellis Cross at the Vitality 10k in London in May to spark further talk of retirement.

Farah helped silence some of the external noise with an impressive run on this occasion in the capital and crossed the finish line in Greenwich with a time of 61 minutes and 49 seconds after storming clear of his nearest rivals during the last three miles of the 13.1-mile course.

It was only the 39-year-old’s third-fastest run in the Big Half but still enough to edge out Jack Rowe and defending champion Jake Smith, who finished second and third respectively.

Scotland’s Commonwealth Games gold medallist Eilish McColgan claimed victory in the elite women’s race with a record time of 67.34 minutes but unlike Farah she will not be competing in the London Marathon after it was announced on Friday she had withdrawn due to a medical issue.

“Today wasn’t easy but most important is the win and it is nice to be back,” Farah told BBC Sport.

“It is really nice to see my family here and so many people come out. It is family-friendly but most importantly for me, it is the streets of London and just the support and atmosphere, it is brilliant and makes you want to come back every year again and again.

“The key thing for me today was to try and win, no matter what happened.

“It was to play around with things, pick up my drink and all practice ahead of the London Marathon.

“I’m excited, I’m looking forward to it. The last seven weeks it has been good, I’ve got consistent training going, so I’m happy with where I am. The next step is this afternoon I’ll fly out and get ready for the next four weeks, get my head down and see what I can do.

Farah was competing for just the second time in 2022 and eager to bounce back from his disappointment in May.

After being part of a five-man group for the first half of the London event, the multiple gold-medal winner used his experience to pull away after refuelling at the 11-mile mark.

His winning margin was slower than his 2018 and 2019 victories but provided the British athlete with a confidence booster ahead of taking on next month’s London Marathon.

Fellow Olympian McColgan will not be competing in October’s 26.2-mile race having been hit by a reaction to taking on fuel during long practice runs.

The issue has been identified as rebound hypoglycemia, a common occurrence among endurance athletes which leads to reduced blood sugar levels and means there is not enough glucose in the blood to meet the body’s demands.

But McColgan stuck to water on Sunday and bettered Charlotte Purdue’s time of 69.51 minutes last year to show she will be a force to be reckoned with if she can compete as planned in the 2023 London Marathon.

“To run a two-minute course record, I can’t ask any more,” she said.

On the marathon, McColgan admitted: “It is disappointing and if it was up to me I would probably try and batter on, muscle through but I know that is my heart speaking and the sensible decision is to get everything right for April.

“The good thing is it is only seven months. I would be more frustrated if it was a full year to wait. It was cool to come here and get a race on the streets of London, half the distance so hopefully in April we can go the full way.”

David Weir warmed up for what will be a 23rd consecutive London Marathon with a record time of 47.18 minutes on his way to triumphing in the men’s wheelchair race.

Meanwhile, Eden Rainbow-Cooper equalled the course record in the women’s wheelchair race with an excellent 56.39 minutes.