Max Verstappen was hailed as being in a “league of his own” and “on another planet” after he raced from 14th to victory at the Belgian Grand Prix.

The Red Bull driver is closing in on his second world championship after moving 98 points clear of Ferrari’s Charles Leclerc – the equivalent of nearly four victories with eight fixtures remaining.

Verstappen was stripped of pole position and demoted down the grid after taking on his fourth engine of the season at Spa-Francorchamps, one more than is allocated for the season. 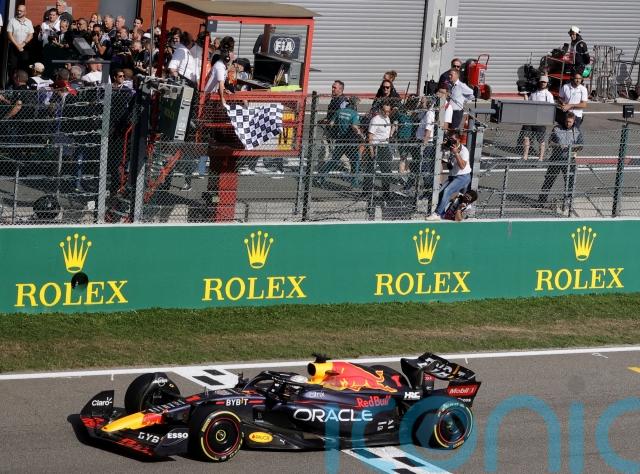 But the 24-year-old was able to take advantage of a chaotic opening lap after Lewis Hamilton and Fernando Alonso tangled at Les Combes to move up five positions. He was then third by the end of lap eight before he usurped team-mate Sergio Perez for the lead on lap 12.

Despite briefly losing first place to Carlos Sainz when he made his first stop, Verstappen was back ahead on lap 18, taking the chequered flag 17.8 seconds clear of Perez – the driver now second in the championship standings, albeit 93 points back.

“Max was flying,” concluded Perez, the Mexican using the same machinery as Verstappen. “He was on another planet.”

Verstappen’s superb comeback triumph was his third in a row and ninth from 14 appearances this term.

“Max was quite simply in a league of his own today,” said Red Bull team principal Christian Horner. “Not just today, but all weekend.

“He has excelled here in the past and today he has smashed it out of the park. Since the first lap in practice on Friday, Max has just been in phenomenal form.

“Strategically, we chose to take the penalty here, but of course, Max still had to navigate his way through the pack.

“He did that very efficiently over the first couple of laps and he hit the front far quicker than we could have ever expected.

“It was one of the most dominant performances that we have had as a team.”

Verstappen denied Hamilton a record eighth title at last year’s deeply contentious season finale in Abu Dhabi, and he has been largely unstoppable since.

“Since Max won that world championship he has taken another step,” added Horner. “In many ways it released him and he is driving at an incredible level.

“Given his age and experience, what we are witnessing is a driver completely at one with the car. He is in an absolute purple patch of his career.”

A cautious Horner added: “The championship looks healthy, but things can change very quickly. We just want to keep this momentum rolling forward.”