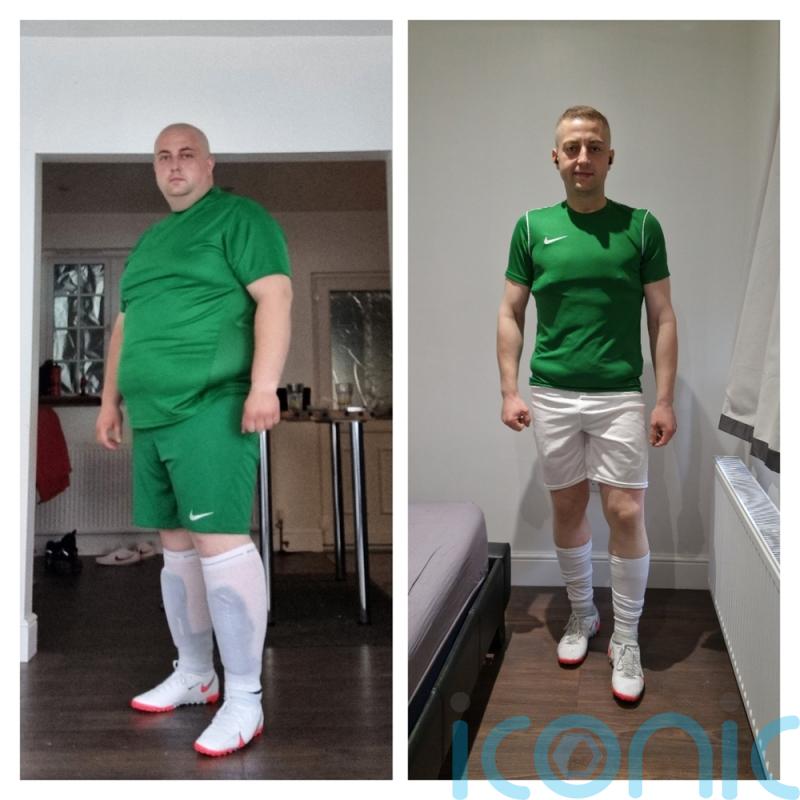 A lorry driver who ballooned to 29st after scoffing 10,000 calories in daily takeaways lost nearly half his body weight in a year after joining a special fat-busting football league and now weighing 14st feels confident to start dating.

Before Vlad Tudose, 33, moved from his native Romania to the UK in 2010, aged 20, to study Law and International Studies at the University of Coventry in Warwickshire, he was a “fit and active” sportsman, who split his time between football and rugby pitches and weighed a limber 11st 3lb.

He had his first wake up call in 2012, by which time he wore 48in waists and XXXXXL tops when, horrified by a picture of himself on holiday in London, he began a negative spiral of trying and failing on multiple weight loss diets. 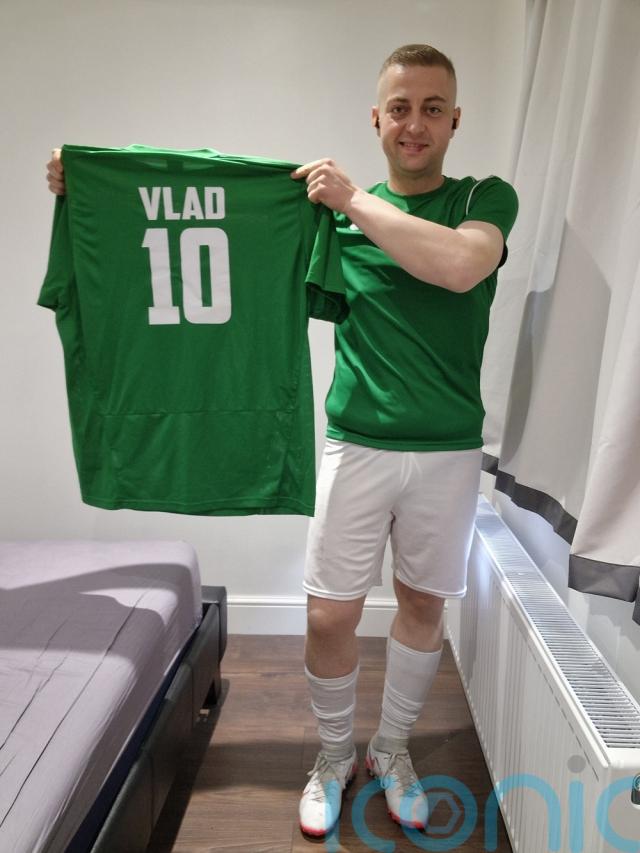 All that changed in June last year when he saw an advert for the MAN v FAT football team, joined one local to his Coventry home and slimmed down to a 14st size medium, which he says has given him the drive to date, adding: “I feel proud of myself now.

“I moved to the UK with my girlfriend and my best friend, but after seven years we had to break up.

“I wasn’t taking care of myself and I was in a very negative space, just letting myself go.”

He added: “In all honesty, I had a lack of confidence and care.

“And I found it really hard to be single, but I feel amazing now for the first time in years.

“I am proud of my achievement, but the most important thing is that I’m happy. I experience high levels of happiness every day, which I never did before when I was nearly 30st.” 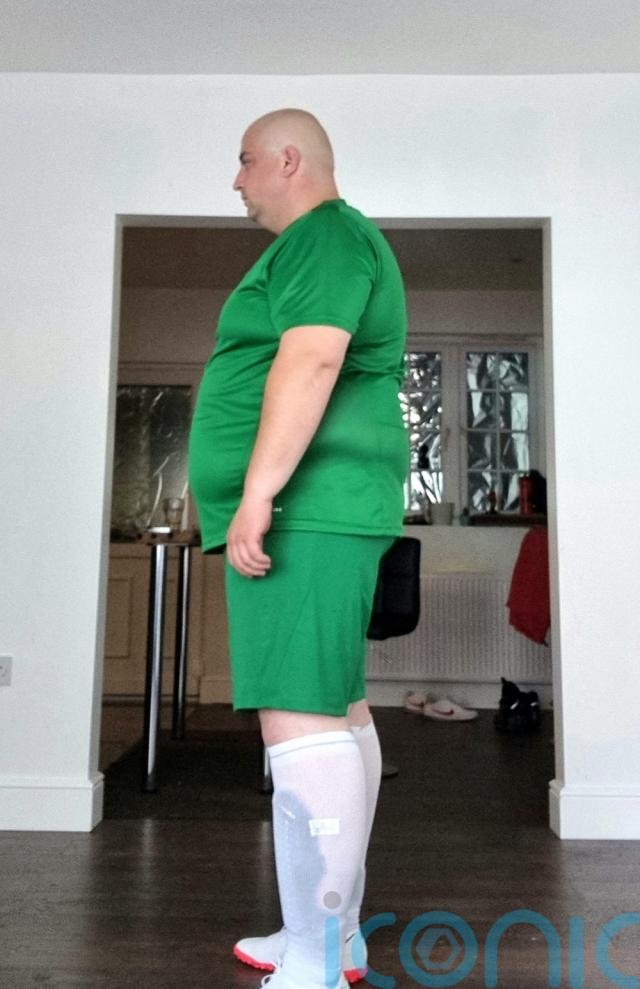 Realising the football league, launched in 2015 exclusively for overweight men who want to lose weight, was his best chance to lead a healthy life, Vlad threw himself into it with gusto.

He started following a healthy diet, consisting of salads and grilled meats – slashing his calorie intake from 10,000 to 2,100 – 400 less than the daily maintenance diet for men of 2,500 calories recommended by the NHS.

He also booked every Tuesday off work for the year, so that he could play football with his MAN v FAT teammates.

The matches, which run every Tuesday, start with a weigh in and for each team member who has lost some weight, 0.5 goals are added to the final score.

Despite his incredible results in the last year alone, Vlad has yet to reach his goal of 11st 9lb,  which at 6ft tall will give him a body mass index (BMI) used to gauge a healthy weight of 22.3 which is well within the NHS healthy range of 18.5 to 24.9.

Currently 14st with a BMI of 26.8, he said: “I was so committed to this, I cancelled my booked holidays for two weeks and I booked off my Tuesdays, so I could play football.” 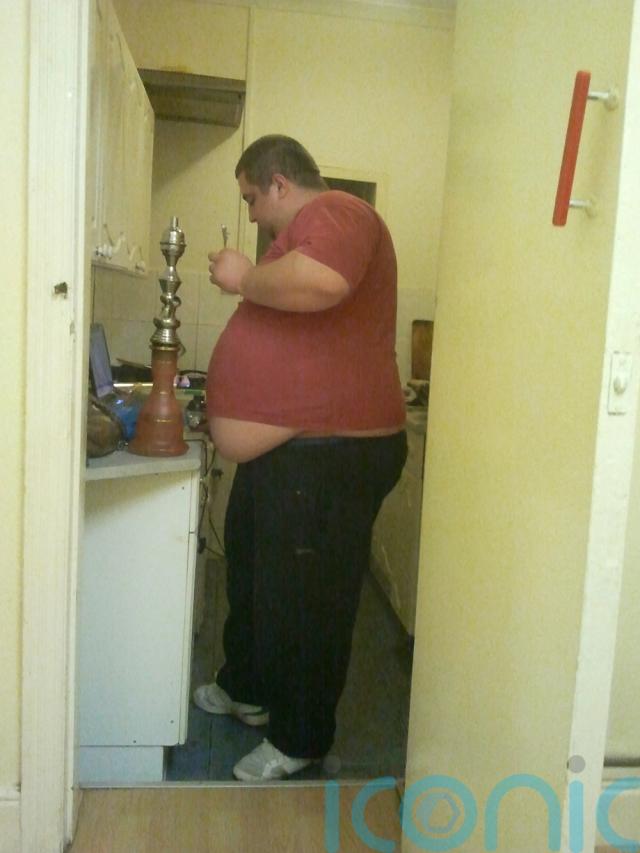 He added: “It was and continues to be a massive commitment in my life, but I knew this was something I had to do.

“I promised myself I would never be 30 stone again. I was upset with myself and I needed to make a permanent change.

“The next day, I threw away all the unhealthy food from my house. I started having two or three meals a day, things like grilled fish and vegetables.” 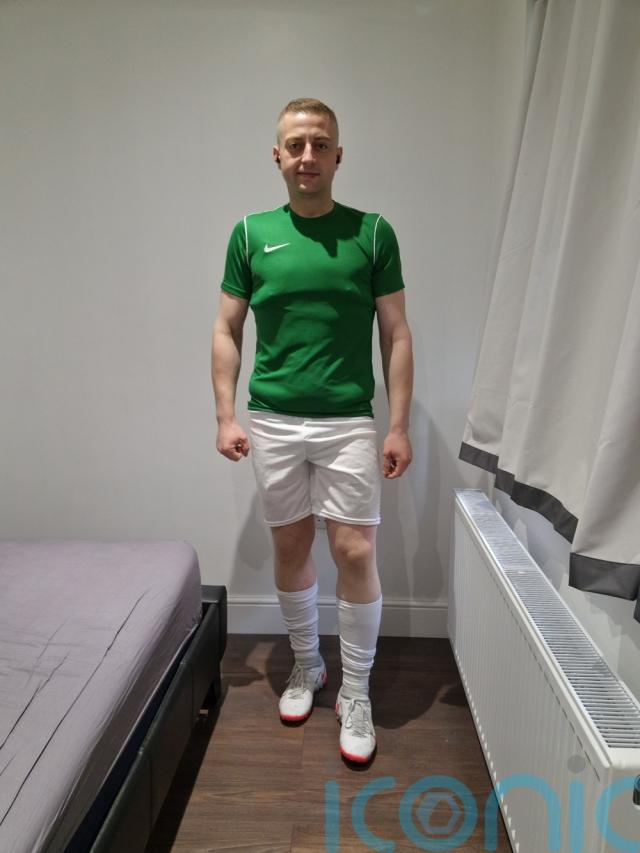 Vlad added: “Being with a group of people who were all so supportive in the football team was incredible.

“I was at breaking point so often, when I felt the need to binge, but I’d start thinking about the team and wouldn’t want to let them down.

“Whenever I had moments of weakness where I wanted to order a takeaway, I’d think about them. I’d tell myself, ‘If I can’t do it for myself, I’ll do it for them.'” 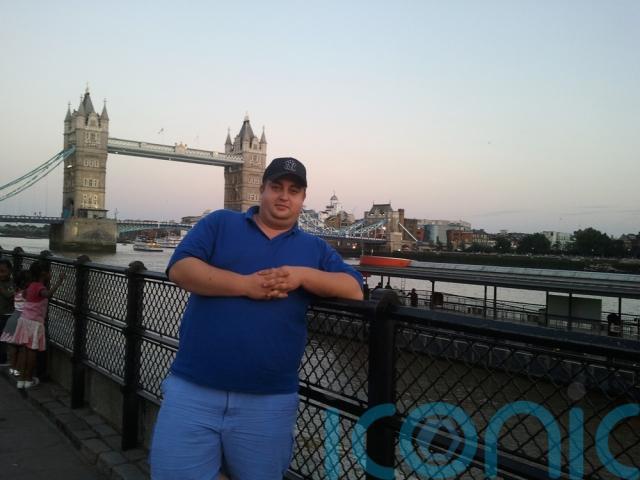 While Vlad was passionate about sport growing up, when he moved to Coventry he began to binge eat takeaways and binge watch TV shows right through the weekends.

He became a regular at his local chip shop and often chomped on multiple burgers, fried chicken and bottles of fizzy pop  in one sitting – taking him to 21st 8lb with a BMI of 41.3, making him obese, by the end of 2012.

It was around that time that his girlfriend of seven years decided to break off the relationship.

Vlad said: “I’d order takeaways three times in the day. I’d turn off the phone and put on six movies in a row, or watch a couple of series.

“I split up with my girlfriend as she couldn’t take it anymore.

“I couldn’t even look at myself. I didn’t even have a mirror, so I didn’t really know how bad  I looked.”

He added: “I was wearing elasticated trousers, so I really had no idea that I was even getting bigger.

“I was letting myself go and I wasn’t realising just how bad things were getting.

“But my girlfriend didn’t leave me because of my weight, she left because of how I had become and how little I cared about myself.

“That was a really low point for me.”

When Vlad was at his heaviest, tipping the scales at 29st, with a BMI of 55.5, he could no longer climb a flight of stairs standing up.

He recalls once having to crawl down the stairs from his apartment following an issue with his knees in 2012, as he was “too heavy” for the paramedics to carry.

Shocked and embarrassed about the state he was in, he said: “It was really heartbreaking. It felt like I was living in a nightmare every single day.”

He added: “I couldn’t do things that others did, I couldn’t even climb any stairs.

“I had issues with my knees and I was on the first floor and when I had to call an ambulance, I was too heavy for the paramedics to carry me.

“I had to crawl down the stairs to the ambulance.

“I was so embarrassed and I was struggling with depression and anxiety.”

Vlad tried several diet plans between 2012 and 2020, but nothing seemed to work and he would immediately revert to his binge-eating patterns.

He said: “I used to have a wide range of cravings. I would just eat every kind of fast food. Burgers, chips, pizza, anything I could eat.

“I was having at least a takeaway a day, but it was three different items and a dessert and a large drink.

“Then I snacked on lots of chocolate, washed down with lots of fizzy drinks.”

He added: “I kept putting the weight back on and then some. ”

Stumbling upon an advert for MAN v FAT last summer changed his life.

He now walks for an hour each morning and enjoys shopping for clothes now he is a size medium and no longer needs to scour the internet for plus sized garments to disguise his shape.

He said: “It’s been a massive change to my life. Even my family think I’m completely unrecognisable.” 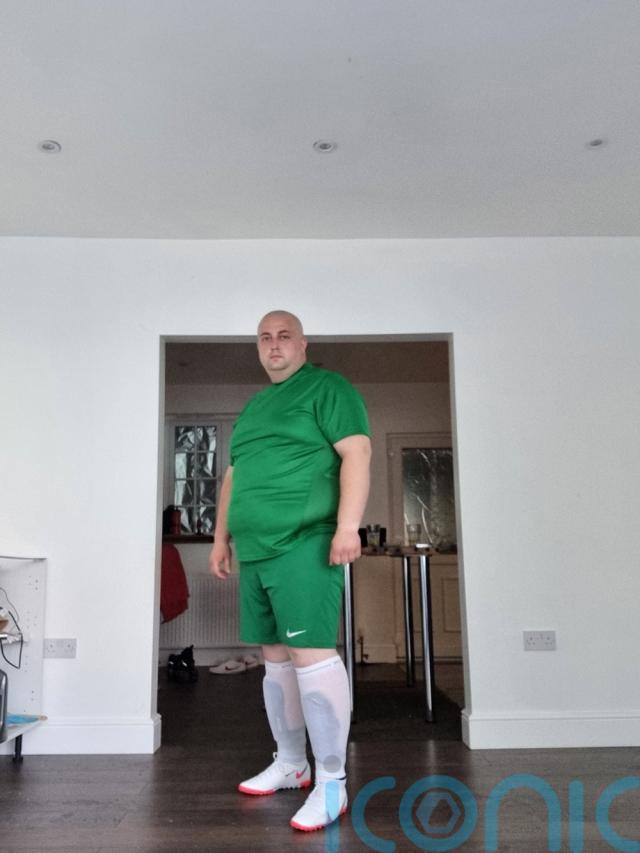 He added: “And it’s so easy now. It’s just my lifestyle. This is how I live.

“Even just waking up, I have energy and I’m active. My mental health is great and my colleagues all tell me I’m like a different person.

“I’ve been on so many diets before and made so many mistakes, but they were actually positive moments because they brought me here.

“I would recommend doing this to anyone.”