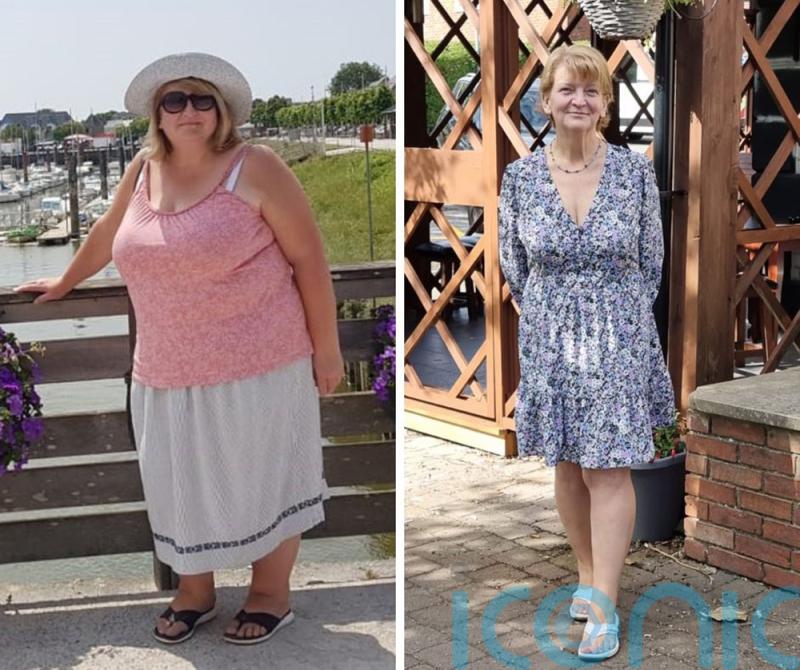 A 19st 2lb size 24 grandma who loves baking and whose 30 year weight struggles peaked after she lost her husband to bone marrow cancer has shed nearly 9st to reach her 10st 6lb size 12 goal just before turning 60.

Weight first became an issue for former nurse Christine Burnell, 59, following the birth of her second daughter in 1987, after which she could not shift her baby weight and went on to yo-yo between a size 14  and an 18 for years.

When her librarian husband John Burnell  died, aged 47, in 2007,  both her daughters had left home and 5ft 4in Christine was soon comfort eating which, alongside health struggles of her own in her 50s, saw her weight balloon to 19st 2lb by 2019.

She had flirted with slimming club Weight Watchers, now WW, down the years but now, with a body mass index (BMI) used to gauge a healthy weight of 45.7, compared to the NHS healthy range of 18.5 to 24.9, meaning she was obese, she decided “enough was enough” and went back. 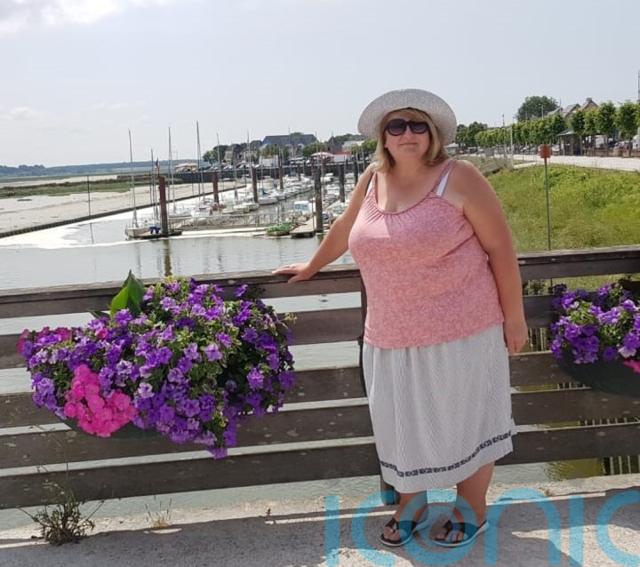 Now 10st 3lb, with a healthy BMI of 24.4, Christine, of Darlington, County Durham, said: “With every decade, I have promised myself to not be fat.

“Now, nothing is off the agenda. Every door is open.”

Christine who, since losing her husband has met plumber and electrician, Declan McGuckin, 64, who she now lives with, was taken by surprise when she could not shift her baby weight after her youngest girl was born. 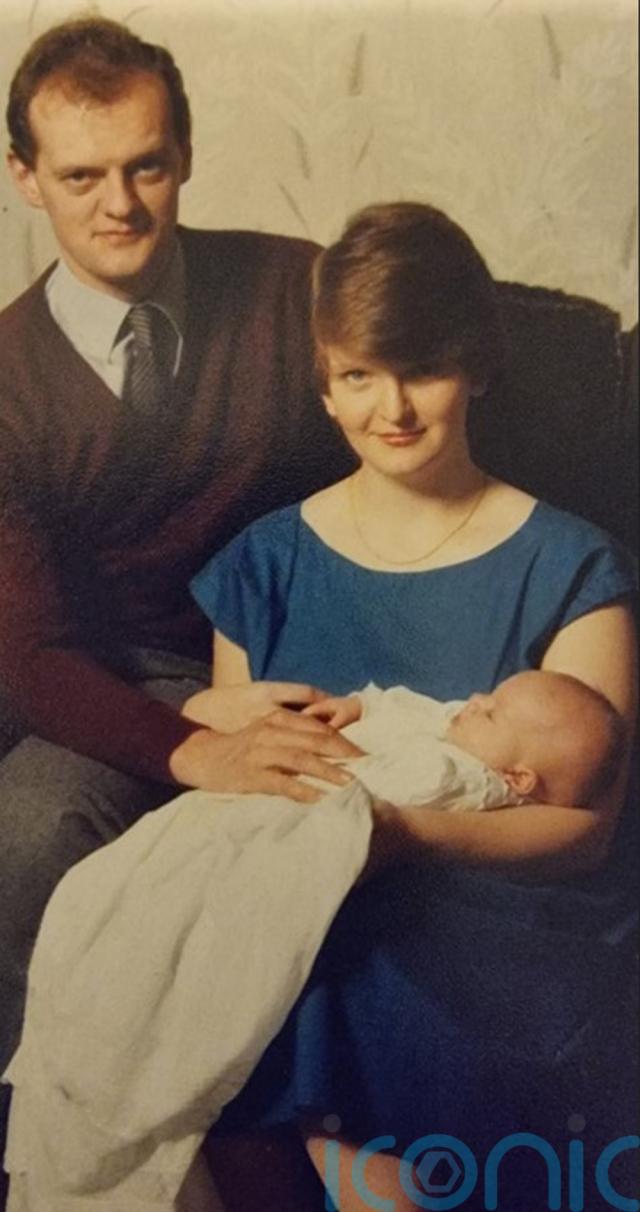 She said: “I had my first daughter, just before I turned 21 and the extra weight I gained with that pregnancy just disappeared by the time she was six months old.

“Back then, if I put on weight, I just starved myself for a week, eating cereal or eggs, and it went straight back down.

“Four years later when I had my second daughter, I assumed the baby weight would just disappear again.  But it didn’t and I went from 11st to 13st and stayed there.”

Paired with a house move and returning to work as a nurse just three months after her daughter’s birth, Christine joined Weight Watchers for the first of many times to try and get a handle on her weight.

“Instead of being pleased I’d done so well, in my head I’d failed and went off the rails.

“I started eating everything I wasn’t allowed, frying everything, like eggs and meat and snacking on crisps and chocolate.”

Jumping to around 15st, while working full time and bringing up her two young children, Christine’s father, Reg Knight, a mechanic, was diagnosed with terminal bowel cancer and died aged 57 in 1989.

She said: “It was a very difficult time. Everything was very stressful and I would just yo-yo up and down with my weight, losing a few pounds, then putting them back on.

“I didn’t feel good about myself and I avoided being in any pictures.”

She said: “I never ate breakfast but at lunch, I would stop in the canteen or pick up a sandwich or a pie.

“It was dinner, though, which was my downfall, because I had a lack of self-discipline.

“I was always baking cakes or treats, so there was always something to snack on.

“I would come home from work hungry and eat a sandwich while I made dinner, then I would snack while I cleaned, before sitting down with a cake or crumble in the evening.”

Drinking gallons of diet pop, like Diet Coke and lemonade, coupled with unhealthy snacking, all her attempts to control her weight were swiftly scuppered.

She said: “I was stressed all the time and never had a moment to myself, so I got stuck in an unhealthy cycle.”

Turning 40, Christine fluctuated between a size 14 and 18, then in 2004, her world was turned upside down when her husband, John, was diagnosed with multiple myeloma, a type of bone marrow cancer.

Christine added: “He had been feeling unwell, went to the doctors and was diagnosed the day before his 45th birthday.

“My eldest was at university and youngest doing GCSEs and it impacted all of us.

“One of the small benefits he had during the years before he died in 2007 was he was on anti-sickness medication and could eat whatever he wanted.

“He loved butter on toast and vegetables fried in butter, so when he died, I had a fridge full of it.”

A size 16 when John was taken from her in January 2007, Christine was left in an empty home, learning to cook for one, while adapting to an entirely different life.

She said: “I had gone from a busy house with John, my eldest and her partner and my other daughter living there to being alone.

“I could eat whatever I wanted and used the butter to make cakes, slathered it on toast and put it on potatoes – everything.”

In 2010, Christine managed to get down to a size 14 and started dating again, meeting her partner, Declan, through an online dating website.

A keen foodie like her, Christine was soon baking and cooking glorious meals like roast dinners, big Bolognaises, Chinese and Indian dishes, as well as busying herself with family, after her first grandchildren, twin girls, were born in 2011.

She said: “Declan is very active and sporty and eats a phenomenal amount, but stays very slim.

“So, I ate alongside him, but without doing the exercise, so I swiftly jumped from 13st 7lb to 19st 2lb in the next eight years.”

But in 2013, Christine began to suffer with plantar fasciitis – a pain on the bottom of the foot, heel and arch.

“It was like stepping on something really sharp, across the whole foot, on both feet,” she said.

“If I had to walk, I would be desperate to just get to the end. There was no pleasure in it.

“It became so bad that I couldn’t walk by 2018. I even drove to the corner shop, a five minute walk away.

“If I went to do the school run and tried to walk, my feet would swell up because of the condition, which was exacerbated by my weight.”

She added: “I couldn’t wear shoes for a long time, just flip flops.”

Leaving nursing and becoming an assistant to a wedding planner in 2015, Christine’s feet improved with physio, but her health problems were far from over and in Spring of 2018 she was diagnosed with fibromyalgia – a long-term condition that causes pain all over the body.

She said: “I hurt all over, my hands, arms, back, neck – it was easier to say where I didn’t hurt.

“I was depressed, I felt very, very low.” 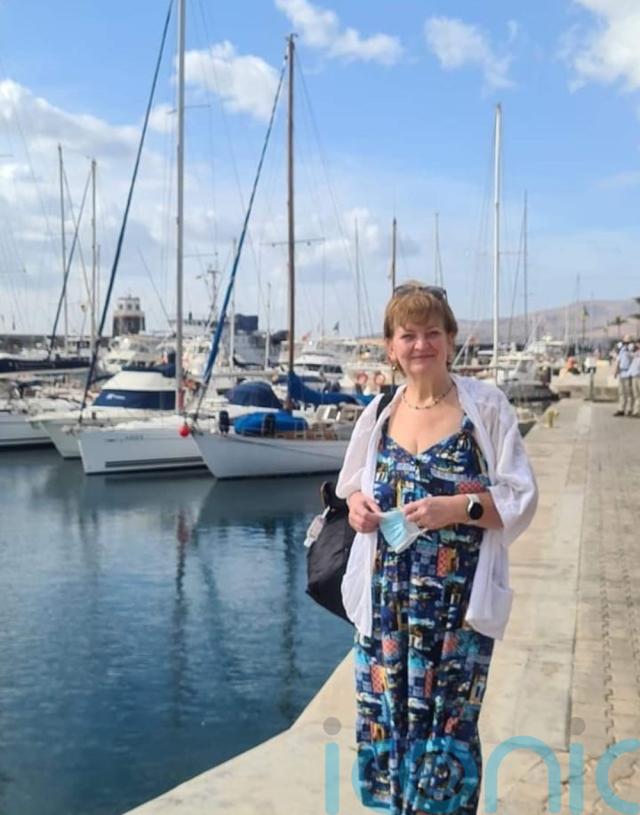 This time, determined to succeed, she said: “The group of ladies were lovely and I did really well, losing 4st 13lb by March 2020, so I was 15st.

“But then the pandemic hit and I started baking. I found a recipe for a banana, walnut and chocolate cake which I didn’t like the sound of, so I made that for Declan, thinking I wouldn’t like it.

“But I tried a slice and it was so nice, I made it every week.”

Back up to 17st by March 2021, Christine resolved to lose the weight for good.

She said: “I was so disappointed in myself for putting it back on.

“I started going to the classes in person and being weighed and made to feel accountable.

“I started going walking with my lovely friend Diane, going on long walks and enjoying it.” 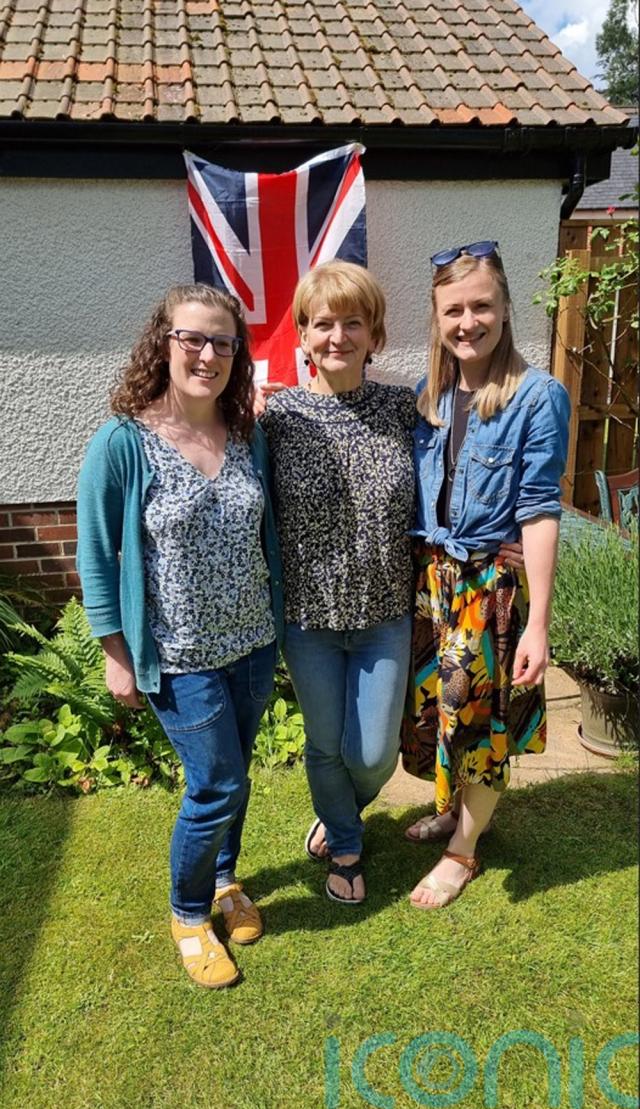 The weight started to fall off and by April this year Christine hit her target of 10st 8lb.

She said: “It was amazing. I always say my children are my greatest accomplishment but this was a very close second.

“I expected it would be really hard to lose weight being this age but it wasn’t. I have friends, going through the menopause, who struggle to lose half a pound, but I was losing two to two and a half pounds a week.

“To know I had finally not just lost the weight, but  started to feel better mentally and emotionally, was huge.”

With seven grandchildren between her and Declan, she is now able to enjoy running around with them and being active around the community again.

Christine, who plans to wear a gorgeous size 12 outfit to celebrate her 60th with a party in December, said: “I never think about getting in the car to go to the shop now.

“We’re planning to go to France this summer to follow the Tour de France and I’ll walk around for the whole holiday.

“I could look back and think, ‘What a shame I didn’t lose the weight all those years ago,’ but there is no point beating yourself up.

“You need to live in the now and enjoy what you have and make plans for the future. Now if I see something I want to do, I know I can.”

* For more information or details on how to join WW, visit www.ww.com/uk.

Breakfast – Two slices of heavily buttered toast with two poached eggs and bacon.
Lunch – Leek and potato soup with a heavily buttered ham sandwich, salad and crisps, followed by cake for dessert.
Dinner – chicken and bacon risotto fried in oil and butter with pepperoni and a dollop of butter.
Dessert – Fruit crumble and custard.
Snacks – Crisps
Drinks – White wine for dinner and tea and coffee in the day