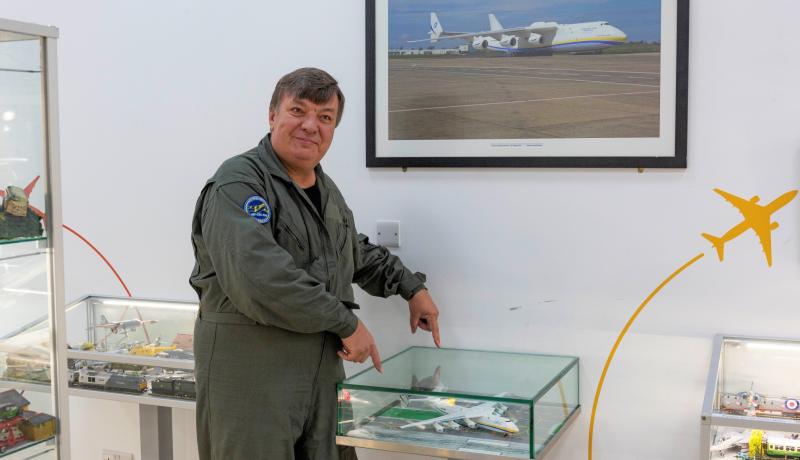 SHANNON Airport welcomed a special guest to its aviation gallery to see an iconic new exhibit.

He flew into Shannon Airport on the Antonov AN 124 earlier this week.

Shannon Airport’s Aviation Gallery, which opened in the departures lounge of the airport in 2018, houses over 1,500 plus specialist diecast models, carefully collected over 50 years by the Limerick native.

His reason was a poignant one, to view a rare scale model of the largest plane ever built, the Antonov AN-225, an aircraft that Dmytro himself captained for many years.

The 1– 200 scale model, which is one of only a few models of its kind in the world, is made from carbon fibre and measures approximately 14 by 14 inches. To put into perspective, it would take 125,172 model AN-225's on 57 stacking levels to fill the cargo hold alone of gigantic aircraft.

Both Dmytro and the AN-225 have a long-standing history of flying into Shannon over the past two decades, due to the airport’s capability of accommodating the mammoth cargo plane on its runway - the longest runway in Ireland.

The 620-tonne aircraft played a key role during the global pandemic, as it was used to transport vital PPE equipment all over the world. On the 10th of June 2020 it arrived at Shannon, carrying the largest consignment of Personal Protective Equipment (PPE) to be flown into Ireland on a single flight.

In October 2021, the AN-225, known as the ‘Mriya’, the Ukrainian word for dream, touched down at Shannon Airport for the last time before it was destroyed at Hostomel Airfield, outside of Kyiv, during the conflict in February of this year.

Michael Kelly, who donated his life's collection of model aircraft to be permanently displayed at Shannon Airport likened the rare collector's item to "gold dust."

You could travel the world to get a “gear down” 1-200 scale model of the AN 225, and still not find one available. I was lucky to get this model sent over from Holland to become part of the collection here," he said.

Mary Considine CEO, The Shannon Airport Group said: “It was an honour to have Dmytro visit our aviation gallery to see the new Mriya exhibit on display and we would like to thank Michael for all his work in finding this rare model."