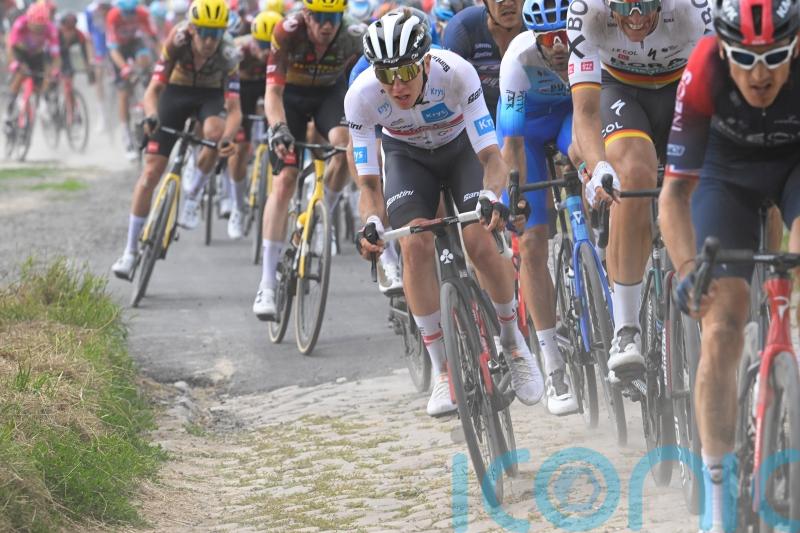 Tadej Pogacar made a major statement in his bid for a third straight Tour de France title as his main rival Primoz Roglic suffered the full effects of ‘the hell of the north’ and had to fix his own dislocated shoulder on a chaotic day on the cobbles around Roubaix.

Simon Clarke claimed Israel-PremierTech’s first Tour stage victory from a breakaway but Pogacar was the big winner on the frantic stage between Lille and Arenberg, taking advantage of injury and incident for his main rivals to gain time, his late attack another display of supreme power and confidence.

Geraint Thomas was among dozens of riders to crash but Roglic was the biggest loser, taken out not by a cobble but an errant hay bale on a roundabout. The Slovenian put his first-aid skills to use as he popped his own shoulder back into place.

“I couldn’t put it immediately back in on the road so I had to sit in the chair of a spectator,” he said in his usual matter-of-fact manner. “I have a technique to put it back in.”

The 32-year-old intends to continue but, having lost more than two minutes, Jumbo-Visma will now surely line up behind Jonas Vingegaard, second overall in last year’s Tour after Roglic crashed out then too.

Vingegaard’s afternoon was far from straightforward, though, with the Dane suffering a costly mechanical issue which forced race leader Wout van Aert to burn his resources in limiting the losses, only just hanging on to the yellow jersey.

Their chase to get back on helped Thomas out too as he finished the race with broken gears after a crash, and they emerged from the dust to come in as part of a group over a minute behind Clarke and 13 seconds behind Pogacar.

It certainly could have been worse. The 13-second deficit to Pogacar at the finish line had been dragged back from a gap of almost a minute, with the Slovenian threatening to contest the stage honours after he and Jasper Stuyven had set off in chase of the breakaway inside the last 10 kilometres.

They would get close, Pogacar charging over the cobbles in much the same way as he powers up mountains in yet another demonstration of the 23-year-old’s outstanding talent, though the six-strong breakaway got the message in time and worked to hold their gap.

Van Aert now leads by 13 seconds from Neilson Powless and 14 from Taco van der Hoorn – the man beaten by Clarke in a photo finish – while Pogacar lurks in fourth place, 19 seconds from yellow, but in the box seat of those who might fight to Paris.

The Ineos Grenadiers sit eighth, ninth and 10th on the general classification through Adam Yates, Tom Pidcock and Thomas, all within 50 seconds of the leader.

Clarke’s win was the first Tour stage victory for the Israel-PremierTech team, and the first individual Tour stage win for a 35-year-old who feared his career was over in the winter after the break up of the Qhubeka-Assos team.

“After the winter I had, I had no team, having Israel ring me up and give me that chance, it just gives you such a reality check,” he said. “As you’ve seen all year this season I’ve come out in every race swinging, trying to make the most of every opportunity…