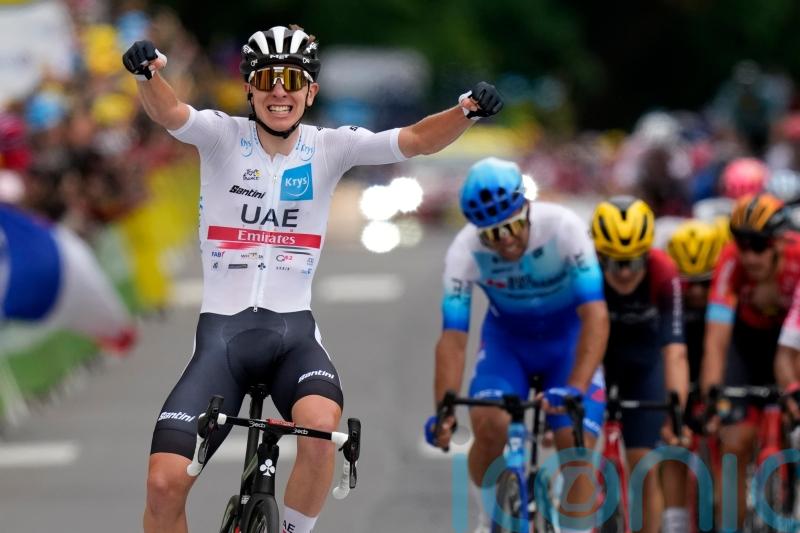 Defending champion Tadej Pogacar powered clear to win stage six of the Tour de France and take the overall lead after the peloton denied Wout Van Aert what would have been a remarkable solo victory in the yellow jersey.

Arguably the two most exciting talents in the men’s peloton dominated the story on the longest stage of this year’s Tour, 220 kilometres between Binche, Belgium and Longwy that were raced at a ferocious pace, an average speed of 49km an hour seeing the peloton get home half an hour earlier than predicted.

For the first 210km it was all about Van Aert on what would be his last day in yellow, the Belgian driving the pace on home roads as he powered the breakaway clear, then emerging as the last survivor as he tried to take on the peloton alone for the final 30km. 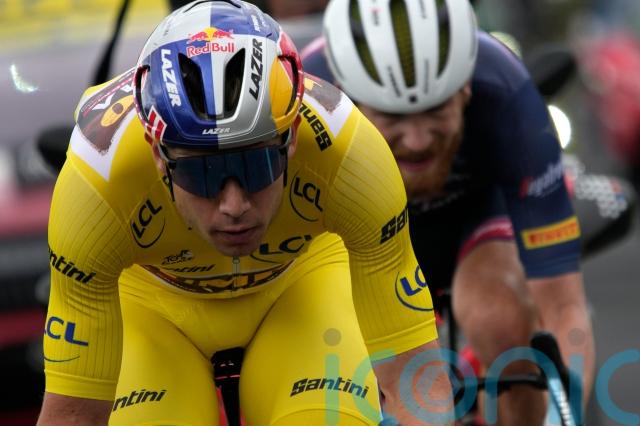 But after he was reeled in 10km from Longwy – sitting up and finishing some seven minutes down – Pogacar took over, following a late attack from fellow Slovenian Primoz Roglic up the short final climb and then powering away from Michael Matthews to take a win he was able to celebrate short of the line.

The Ineos Grenadiers’ Tour debutant Tom Pidcock came home fourth just ahead of team-mates Adam Yates and Geraint Thomas, but all were left trailing in the wake of Pogacar.

“Every time I win it’s even better,” the UAE Team Emirates rider said. “Today was so hard from the start. The first two hours were crazy and the strongest guy went in the breakaway.

“Lots of guys were pulling and in the end the peloton was stronger. When we came to the climbs I was feeling good and the team did an incredibly good job of bringing me to the perfect position so I’m happy.”

Speaking before his yellow jersey was confirmed, he said of taking the race lead: “I wouldn’t mind it for sure. I’m super happy to take the win and anything else is a bonus. We will think about this in the next days.”

Thanks to the bonus seconds for his win, Pogacar now leads overall by four seconds from Neilson Powless.

With the first summit finish to come on La Planche des Belles Filles on Friday, Jonas Vingegaard sits third, 31 seconds down, with the Ineos trio of Yates, Pidcock and Thomas fourth, fifth and sixth, all within 46 seconds of Pogacar.

Van Aert would have known the yellow jersey was not going to be his for much longer given the mountains to come, but he chose to go down swinging after a remarkable opening week of the Tour for the 27-year-old.

Having finished second in all three of the opening stages, on Tuesday he rode away from the peloton late on to take a stunning solo win into Calais.

Then he sacrificed his own ambitions on the cobbles of northern France on Wednesday to salvage Vingegaard’s race after injury and incident hit Jumbo-Visma on a chaotic day on the cobbles.

Unbowed, he then took on the Tour’s longest day in aggressive fashion. The break would take a remarkable 80km to form but Van Aert’s determination to be in it kept the pace relentlessly high.

Jakob Fuglsang fell away with 65km to go, then Quinn Simmons gave a puff of the cheeks and a shake of the head as Van Aert went alone to try to defend a minute’s advantage for the final 30km of the race.

It was not to be, but though victory was lacking, it was another superb ride for his considerable collection.

“For sure the yellow jersey is nicer than the green one but I’ve enjoyed the yellow and I’ll enjoy the green as well,” he said.

“At the end of the day, we were only three at the front, so I was well aware that it would be a mission to stay up there till the end. But I’ve wanted to honour the Maillot Jaune and share the moment with the crowd.”