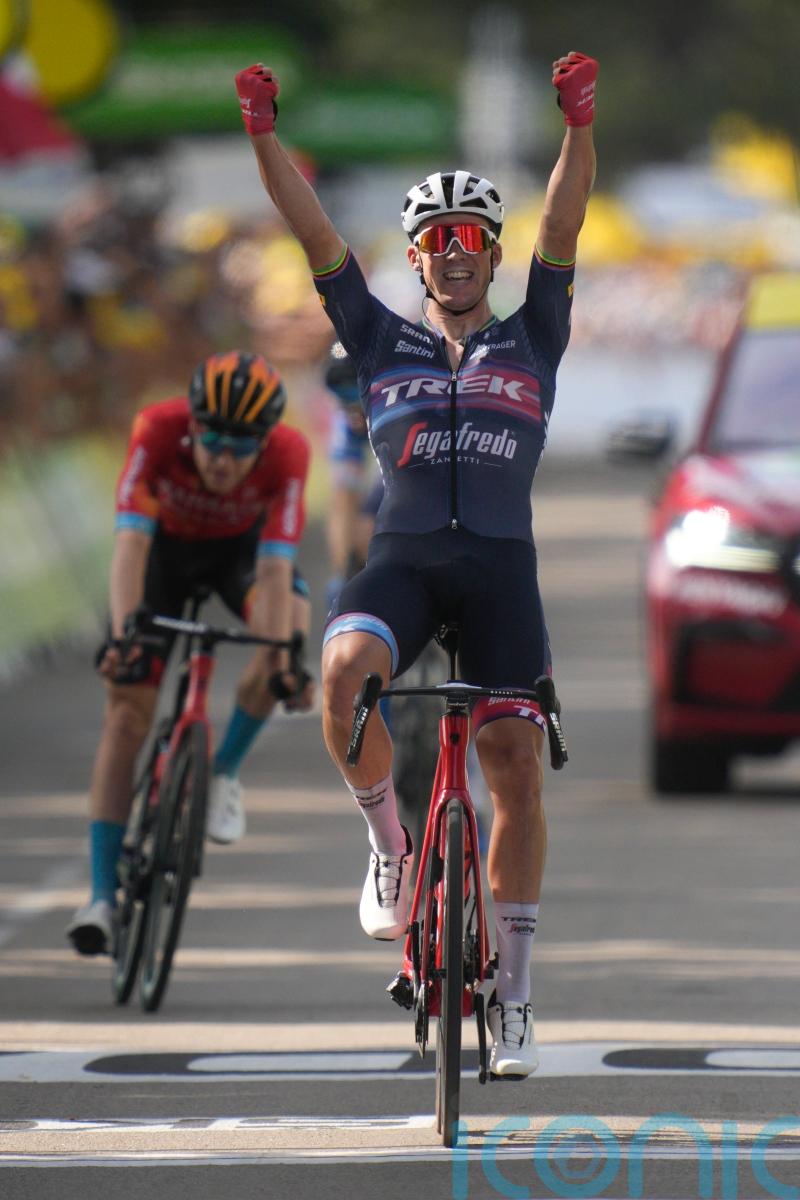 Pedersen comfortably outsprinted Wright and Hugo Houle at the end of the 192km stage from Le Bourg d’Oisans to Saint Etienne as the breakaway prospered after three punishing days in the Alps.

Wright came within three kilometres of glory on stage eight into Lausanne, and was then in the final break into Megeve a couple of days later.

This time he was within touching distance of the win, though he will have known what was coming once he and Houle failed to shake Pedersen, the superior sprinter, on the road into town.

The trio had gone clear of four other escapees in the final 12km of the stage to finish five minutes ahead of the main pack, with the main contenders finishing together to ensure Jonas Vingegaard retains the yellow jersey, two minutes 22 seconds ahead of Tadej Pogacar with Geraint Thomas in third.

After the big battles of Wednesday and Thursday on the high ground, Friday’s profile appeared relatively flat – a rare opportunity for sprinters who have been starved since the race left Denmark.

But, given an undulating route, crosswinds and high, high temperatures in the Rhone Valley, there were never any guarantees and so it proved.

Seven riders got away early on, and Pedersen always held the trump card given the presence of team-mate Quinn Simmons in the breakaway.

They were given a short leash, rarely more than two-and-a-half minutes. But when Caleb Ewan, one of the handful of sprinters who would have fancied this terrain, crashed 70km from the finish, Lotto-Soudal dropped back and the peloton’s chase lost impetus.

Pedersen knew he was the marked man in the group and took the initiative, attacking 12km out with only Wright and Houle able to hang on.

Wright, looking to follow Tom Pidcock’s victory on Alpe d’Huez on Thursday, tried to get rid of the Dane on a short climb going into the final three kilometres but, exhausted on a baking hot day, the 23-year-old Londonder quickly slumped back onto his saddle.

“I knew that to beat Mads I needed to go on that last little kicker but to be honest I just didn’t have the legs,” the Bahrain-Victorious rider said. “He surprised me when he attacked, but he was stronger than me.

“Mads has won some big bike races but I was there, I was happy to make it. I was saying before the stage I wanted to get in the break but it was a hard one to get in. It was better to be in the break because you get more ice, more water to pour over your head. For a British kid that’s not bad.”

Pedersen has won a number of big races, none bigger than the world championships in Yorkshire in 2019, but this was his first stage victory in a three-week race.

“It’s incredible to finally take a win,” the 26-year-old said. “I knew the shape was really good. I definitely missed out on opportunities in the first week.

“The last week there was not a lot of chances for a guy like me, so to take the chance today and get the reward is really nice, not only for me but the whole team. We came here with riders only for stage (wins) and now we have one so it’s such a relief.

“(The plan was) if more than four guys were in the break I should be in it because we didn’t know how other teams wanted to ride the last climb with 45km to go. For a long time I thought it was a mistake to be in the break because we only had two minutes, but in the end it paid off.”