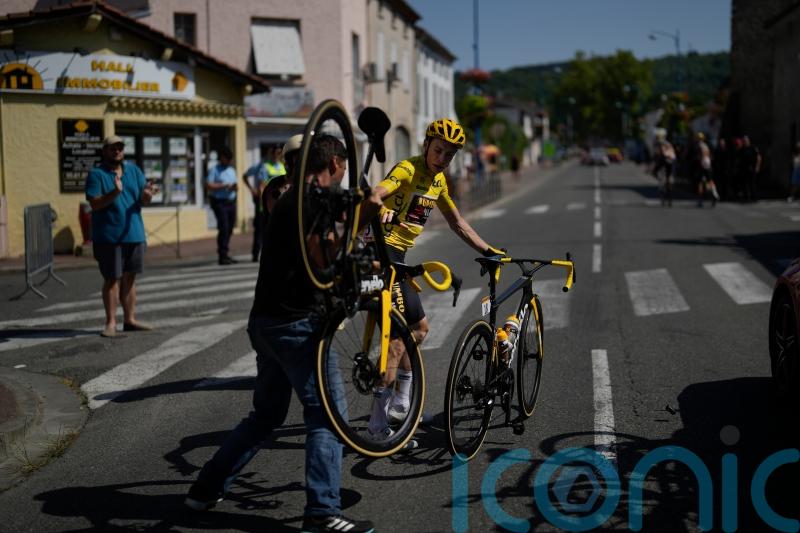 Jasper Philipsen won stage 15 of the Tour de France in Carcassonne at the end of a costly day for Jonas Vingegaard in the yellow jersey.

Philipsen edged out Wout Van Aert and Mads Pedersen in a sprint finish but more significant ahead of the final week of the Tour was the damage done to Vingegaard’s Jumbo-Visma squad both before and during the 202.5km stage from Rodez.

First came news that Primoz Roglic, a pre-race favourite who became a deluxe domestique following a crash, would not start, before another key team-mate Steven Kruijswijk was forced to abandon after hitting the deck.

Moments after the Dutchman was carried into the back of an ambulance, Vingegaard was himself on the tarmac after colliding with team-mate Tiesj Benoot, who was slow to get up. Van Aert tried to salvage the day with a stage win in the green jersey but was half a wheel short.

Though quickly back on his bike after his spill and able to finish with the lead group, Vingegaard will go into Monday’s rest day short on team-mates and needing to assess his own injuries after appearing to land heavily on his left shoulder.

The Tour’s second longest stage, once again contested in sweltering temperatures nudging 40 degrees in the Occitanie region, looked like being the most relaxed of a frenetic Tour so far, but things changed moving into the last 65km.

For the second time in this Tour, protestors sought to block the road. A two-man break weaved their way through as police hauled the protestors aside, and the decision was made not to neutralise the stage. Moments later Kruijswijk went down and sat clutching his wrist and having dislocated his shoulder.

Vingegaard’s crash followed a few kilometres later, and Jumbo-Visma had to work quickly to limit the damage as Trek-Segafredo upped the pace on the Cote de Cammazes, trying to flush out weaker sprinters in favour of Pedersen and setting up a high-paced finish.

Vingegaard holds a lead of two minutes 22 seconds over defending champion Tadej Pogacar with Geraint Thomas third going into Monday’s rest day, with the Pyrenees to come when racing resumes.

“Today was a bad day for us,” the Dane said. “I’m OK. I hope Tiesj will be too. Tiesj crashed in front of me, I couldn’t do anything, it’s things that happen in cycling” 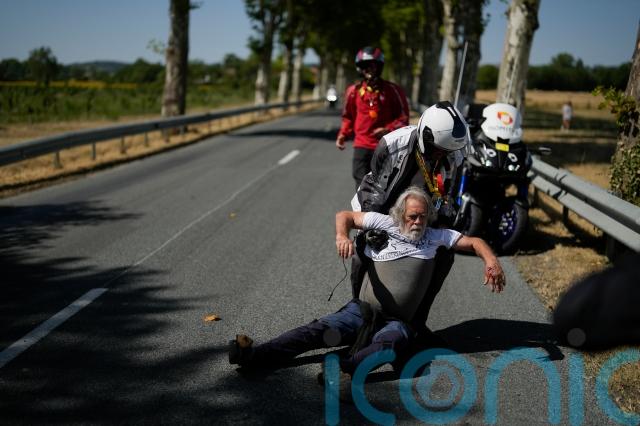 The sprinters have been starved of opportunities in this Tour – the last bunch finish was in Denmark on stage three – but though Carcassonne was where Mark Cavendish equalled Eddy Merckx’s record of 34 stage wins 12 months ago, this region never guarantees the peloton will come home together.

They had to work again this time, catching escapee Benjamin Thomas in sight of the finish, before Philipsen found space to come around Van Aert and Pedersen before the line.

Philipsen had previously had four second places and eight podium finishes on stages in the Tour – including a third place here last year – but this was his first victory.

“It makes it super unbelievable,” the 24-year-old said. “I know what it’s like losing in the Tour de France, I’ve been close many many times but it worked out today, it’s incredible and I cannot believe it.”

From the way Jumbo-Visma told it in the morning, the decision for Roglic to withdraw and recover from injuries sustained last week was theirs more than his, and with Kruijswijk out 140km later, it may well have been one they were ruing.

Roglic had been one of two non-starters on the day with Magnus Cort Nielsen and Simon Clarke – both stage winners in this Tour – having contracted Covid-19, sure to increase nerves ahead of more rest day tests to come for all in the race.