Brenda was on her way home from hospital with her newborn twins when she found out she had won the jackpot. 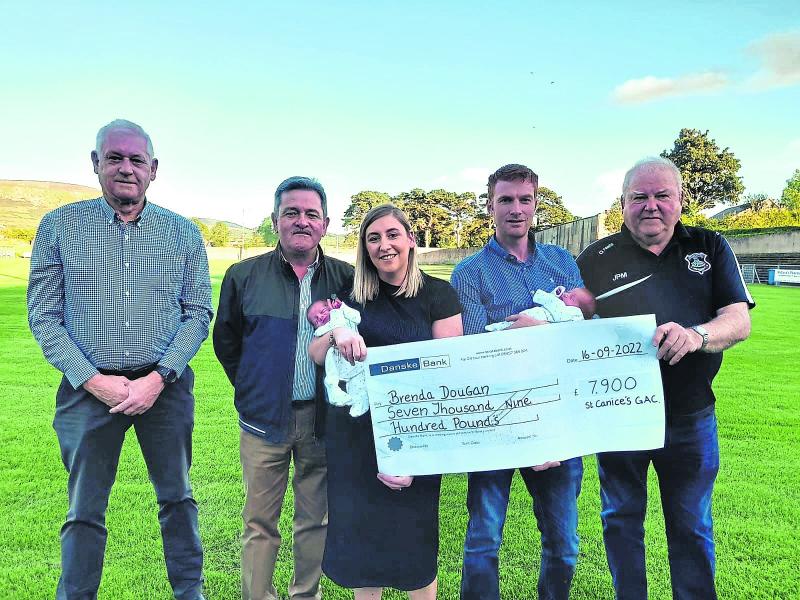 Brenda and Niall Rafferty pictured with twins Liam and Lorcan and Colm McGuigan, Brian Mullan and Liam McCloskey from the club.

A new mum from County Derry, who was on her way home from hospital with her newborn twins when she found out she had won the jackpot in her local GAA club's lotto, has spoken of her joy.

Brenda Rafferty (nee Dougan) had just left hospital with her baby sons Liam and Lorcan when she received the exciting news by telephone on September 9.

Brenda, who has been doing the Dungiven club's lotto for many years, described her windfall as the 'icing on the cake' just three days after the birth of her babies.

Speaking to the County Derry Post, the delighted mum said: “I had twin boys Liam and Lorcan on Tuesday 6th of September. We were up in Antrim Hospital for a few days after they were born one month early.

"We were so lucky to finally get our wee boys home on the Friday evening and we were actually on our way home from the hospital when I got the phone call from Brian Mullan from the club telling me I had won. I couldn't believe it.”

Brenda continued: “I've been doing the club lotto for years and have it set up online to do each week. I usually watch it every week when the draw is being done but I never got seeing it last week. I got some shock when I found out I had won the jackpot.”

With two newborns in the house, the money will no doubt be put to good use.

Dungiven gets on with life after Queen's funeral media glare

The County Derry town found itself at the centre of a will they-won't they political storm last week.

“It was a blessing having two wee healthy boys and to be able to finally get home with them but winning the money as well was the icing on the cake,” said Brenda.

St Canice GAC chairman Stephen McGuigan added: “It's a brilliant story, to have twins and win our lotto jackpot all within days. I'm delighted for Brenda.

“She will go a long way before she ever has a better week – that is stuff of dreams.

“Good luck and good health to both her and her family.”