People carried shopping across fields to residents who were unable to leave their homes for two days after torrential rain tore up the road near Glenswilly National School. Councillor Donal Kelly, who lives nearby, says it will be a 'disgrace' if Donegal County Council can't find funds to prevent a repeat incident 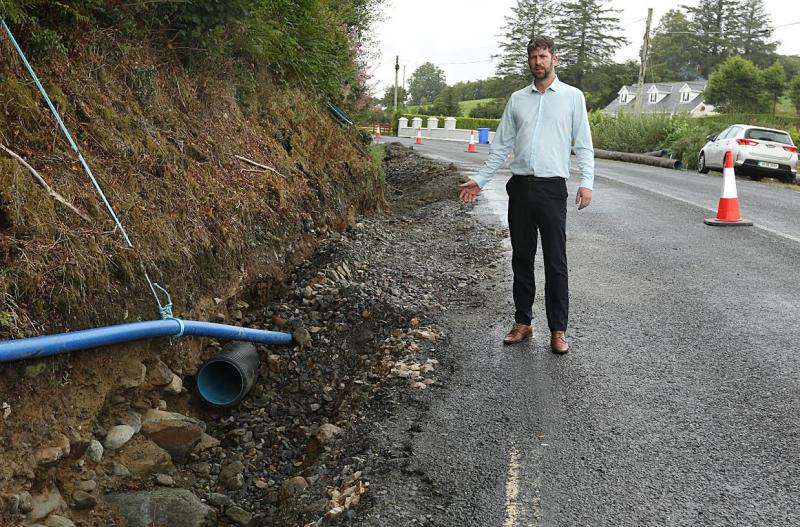 A lack of funding to prevent a repeat of flooding that left residents along a busy Donegal road stranded for two days has been branded ‘a disgrace’.

Torrential rain on the night of September 3 last saw part of the R250, the main Letterkenny-Fintown road, torn up at Glenswilly National School.

The surface of the road and underlying pipes were ripped up during torrential rainfall, leaving the route impassable.

Glenswilly-based Fianna Fáil Councillor Donal Kelly, who lives just a mile from where the flooding occurred, asked at this month’s Letterkenny-Milford Municipal District meeting that the matter be looked at as a ‘mater of urgency’.

A development in Milford was intended for 17 social houses, but in a change of plan the developer has since homed almost 100 Ukrainian refugees

Donegal County Council estimates that a long-term solution would cost €120,000 ad has indicated that funds are not readily available for such works.

“The scenes here were brutal and I just don’t swallow the suggestion that there is no funding,” Councillor Kelly said.

“If we cannot sort out this problem, it is an absolute disgrace. This will happen again - and I am not willing to sit back and let it happen again.

“I find it very hard to believe that Donegal County Council, as a body, can’t source funding of €120,000 for something so severe.”

Councillor Kelly told the meeting how some people had to traipse across fields to carry shopping to some residents who were unable to leave their homes for two days.

He said: “People were tapped in their homes and if the emergency services had landed, there isn’t a hope they’d have been able to get through. There is a maze of roads out there and it’s impossible unless you know them.

“There is a school of 260 kids beside this. Had this happened on a weekday, the children would have had no way of accessing the school.”

Councillor Kelly said he wad given a commitment in February, when the area was also hit by flash flooding, that larger stormwater pipes would be installed.

He said: “I have been told that it would be sorted, but yet nothing has been done. The flooding was outrageous. It was so severe.”

Councillor Ciaran Brogan, who seconded the motion, called for a detailed report to be prepared for members.,

Councillor Brogan said: “I saw first hand the mess out there. This is the type of thing that erodes public confidence. The goalposts have changed a few times since Councillor Kelly was given an undertaking that the issue would be resolved. This is not good enough.

“The senior roads management team in Lifford needs to grasp the nettle here and find the funds as a matter of urgency. This is an emergency situation.”

Senior executive engineer for roads and transport with the Council, David McIlwaine, told Councillor Kelly that he would endeavour to try some ‘short-term measured to reduce the risk of it reoccurring’.

Liam Ward, a Director of Services with Donegal County Council said he would raise the matter with senior management.