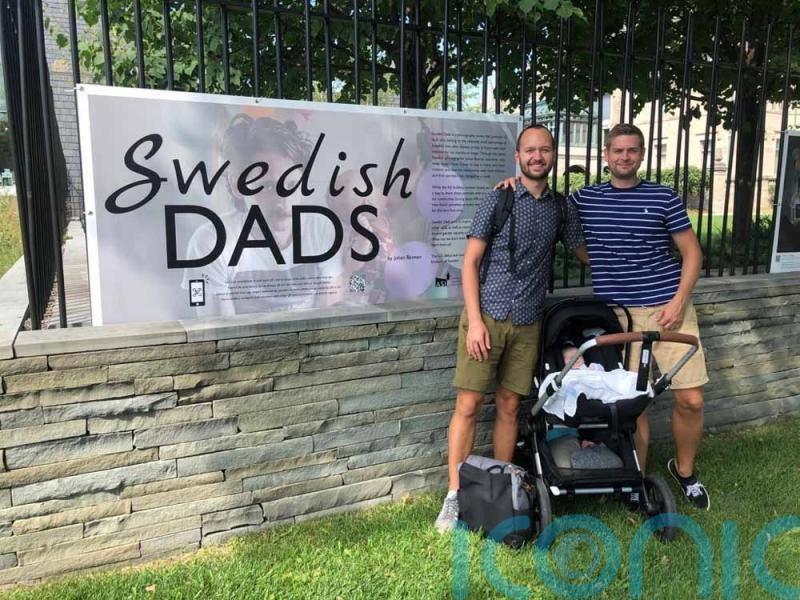 A father has spoken of his incredible journey through international surrogacy as a leading charity estimates that 800 surrogates in war torn Ukraine  – dubbed the European capital of surrogacy –  are pregnant with the children of foreign nationals.

Dad Edvin Fogelmark, 32, changed careers to become international coordinator for Hatch egg donation and surrogacy after having his daughter Zoe with his husband Ola, 36, an engineering manager, in August 2020, as a result of international surrogacy in the USA.

Now, as Growing Families, a leading charity in the field, says 95 per cent of the Ukraine’s surrogacy comes from foreign intended parents, Edvin, of Gothenburg, Sweden, said: “My family fled the war in Bosnia in the 90s and to now see the news of the horrific war in Ukraine just breaks my heart.” 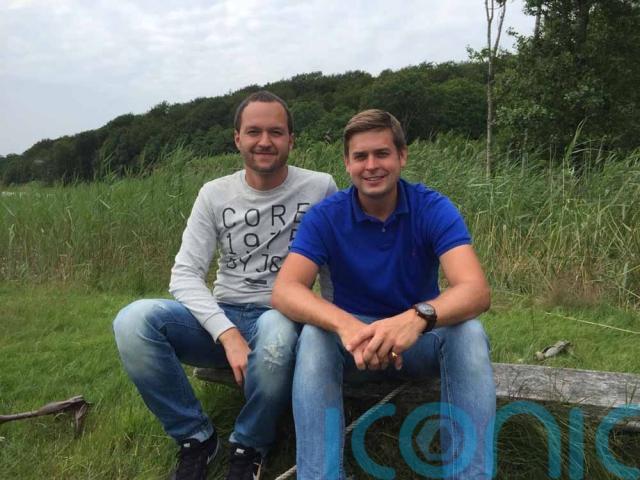 He added: “For the surrogates and intended families that are now separated, this is a time of great uncertainty and fear.”

A performance auditor for multinational company Ernst and Young before Zoe was born, Edvin was inspired by his experience to change careers and, despite a difficult journey that saw him and Ola navigating the global pandemic, the couple are already considering having more children through surrogacy.

Edvin said: “Going through the journey meant my dream of having a child was achieved and made possible.”

He added: “For me, and for any parent, having your child being born is an amazing experience and the start of a new chapter in life.

“With all our challenges, it was even more unimaginable that we reached that stage.

“It feels amazing to have this role in someone’s life, but it’s also a bit scary to be the only two people who will influence who she will become.” 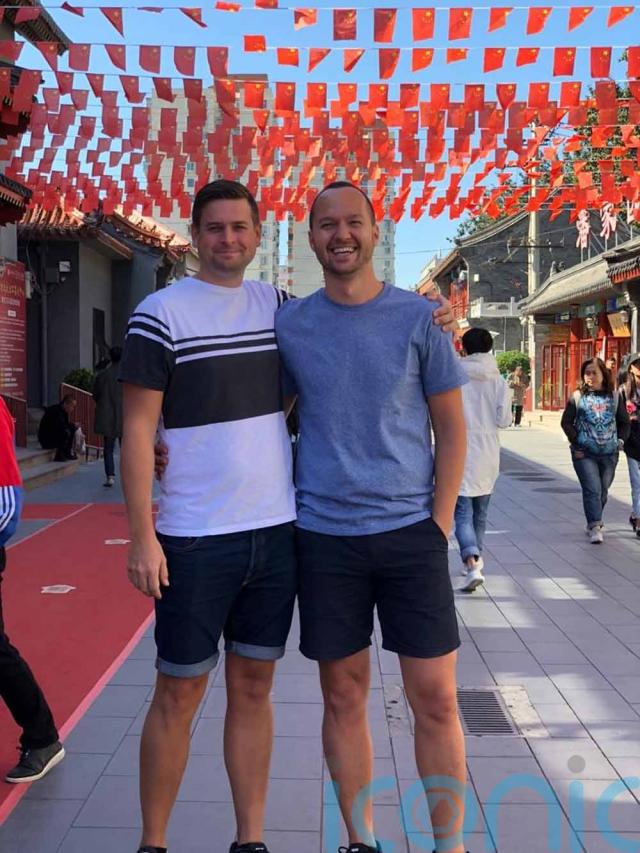 He added: “It’s a huge honour and a bit scary.”

Children had always been on the agenda for Ola and Edvin, who met online in 2014. 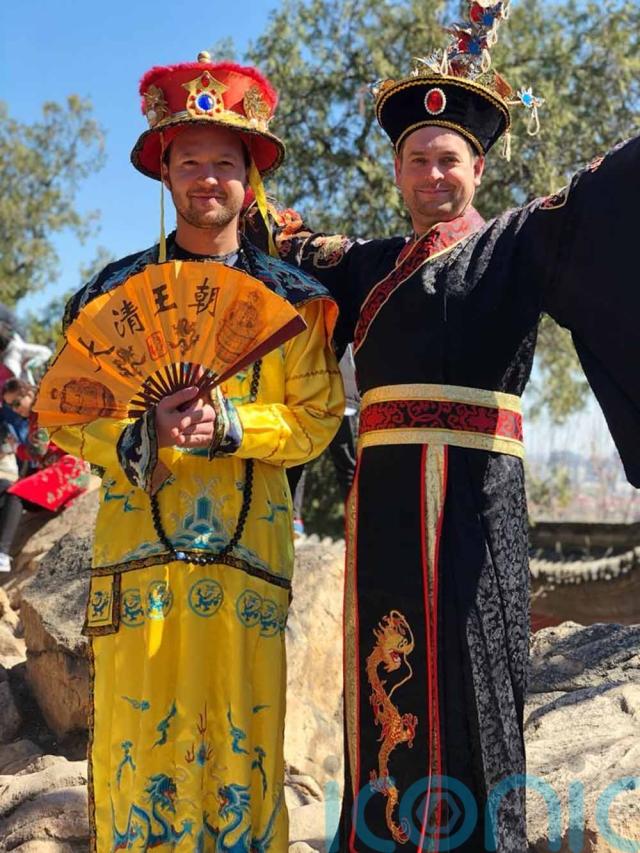 He added: “I suppose it took some courage on Ola’s part, as it all moved pretty quickly. We both have nieces and nephews and knew we wanted children of our own.”

The pair eventually decided against adoption, because international adoption for same-sex parents was “nearly unattainable” and domestic adoption in Sweden was also ruled out due to long waiting lists.

Next, they turned their focus to international surrogacy, signing up to begin the process in 2019 after establishing their relationship over several years.

It meant their potential egg donor and surrogate could come from any of the six countries where surrogacy establishments legally recognise foreigner applications, including the USA and Ukraine.

They quickly decided on the USA as they believed it was the most established process for pursuing surrogacy.

And, finding their egg donor through a clinic in Los Angeles, the couple focused on a donor with a clear medical history, rather than factors such as looks. 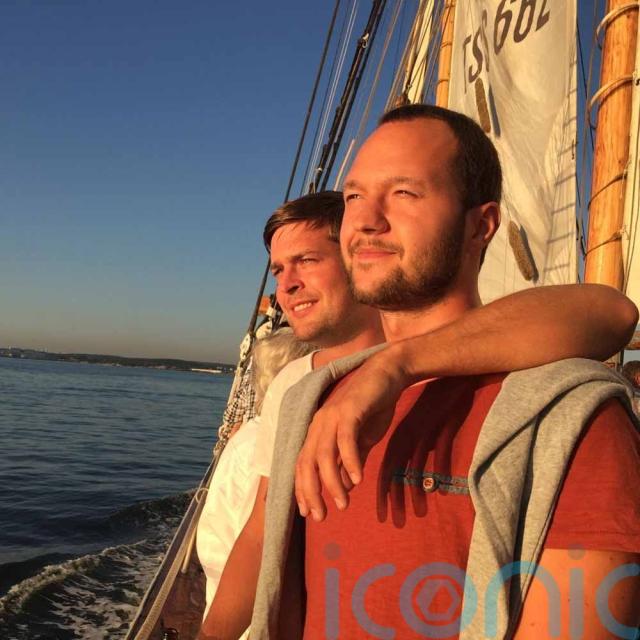 Eight eggs were fertilised – four with Edvin’s sperm and four with Ola’s – but, with parentage not mattering to the pair, the most viable embryos were then chosen for transfer.

The couple’s first two surrogates, both mothers from the USA, did not work out. Sadly, one failed to fall pregnant twice and the other suffered a distressing miscarriage at six weeks.

Edvin explained: “It’s really hard for both you and the surrogate.” 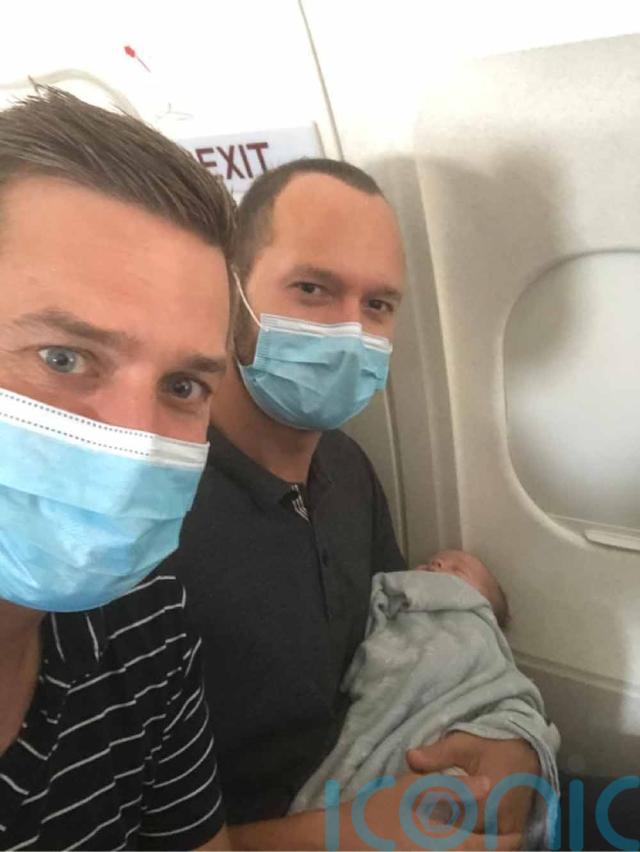 He added: “You build a relationship, you bond and they really want to help you to achieve your dream.

“They’re such amazing people with their own lives, partners and often families.”

Following the miscarriage, Edvin and Ola relocated temporarily to Beijing, China, to regroup, where they were put in touch with their next surrogate. 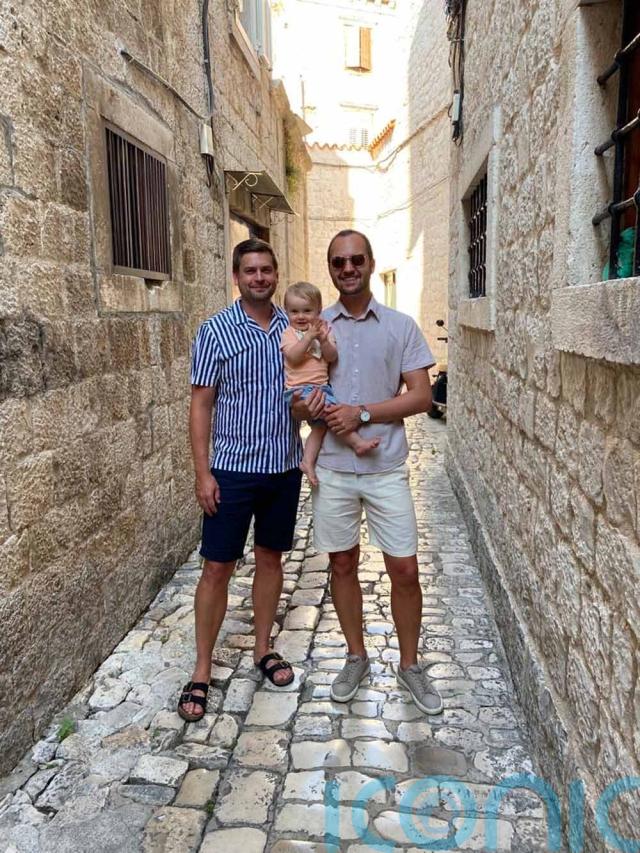 Edvin said: “We were matched for a third time with a woman in Minnesota, USA.

“She had two children and a partner and we did a lot of Skyping. It’s usual not to meet surrogates in person until nearing the end of the pregnancy when it’s done internationally.”

One of the embryos, of which Ola was the biological father, was eventually transferred into the surrogate and, luckily, the process worked and she fell pregnant. 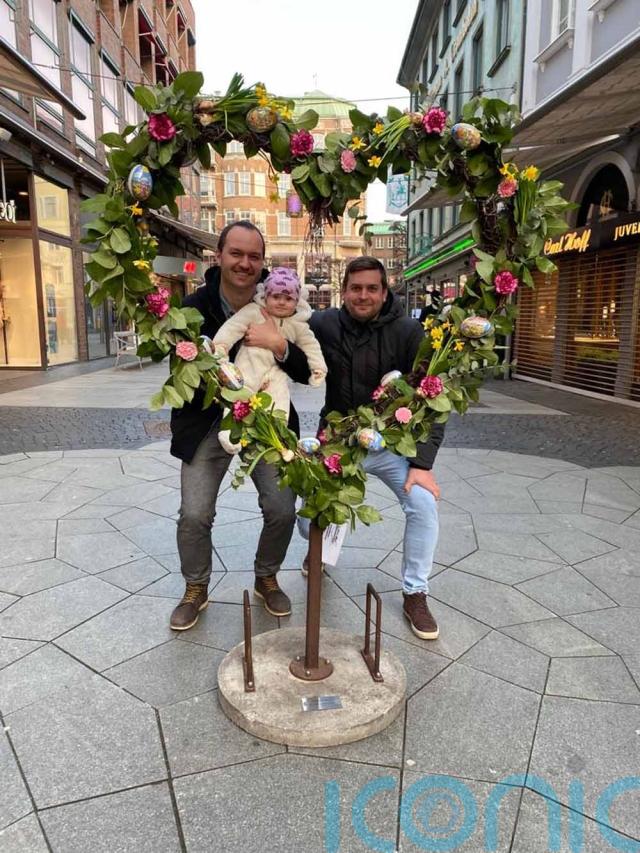 The couple were then in regular phone contact and were able to video call the woman, who they had never met in person, for her 20-week scan.

With their child’s due date given as August 2020, Edvin and Ola planned to travel to the USA from China over the summer, only for Covid restrictions to hit, making it look impossible.

Facing massive uncertainty, still living in China in spring 2020, the men spent weeks frantically booking flights, only for them to be cancelled. 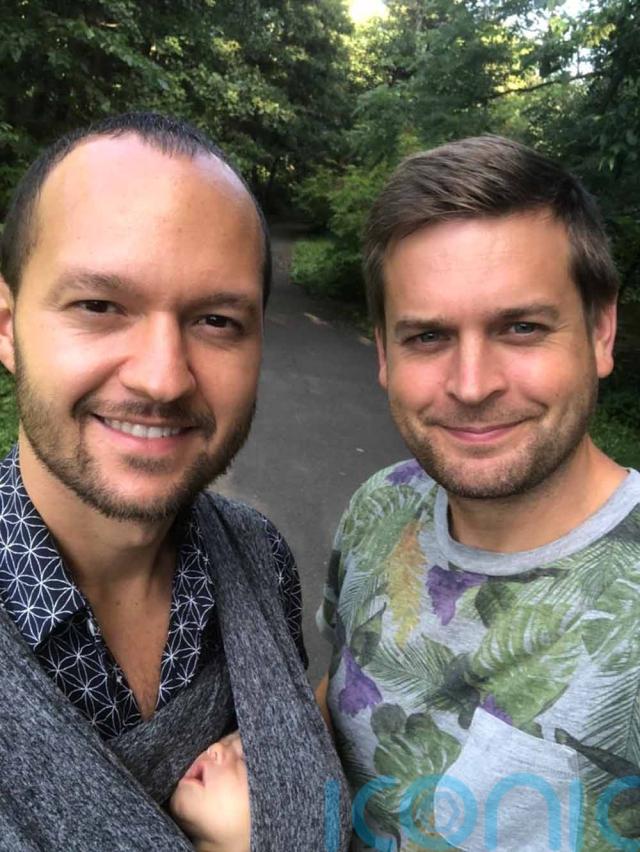 Edvin said: “We were barely eating, maxed out all our credit cards booking flights and were constantly searching online for ways to leave the country.”

They eventually managed to get from China to Hong Kong in July, before travelling on to the USA after 14 days quarantining in a hotel, where they finally met their surrogate in person.

Recalling their first meeting, Edvin said: “Meeting her was both extremely natural but also so strange.” 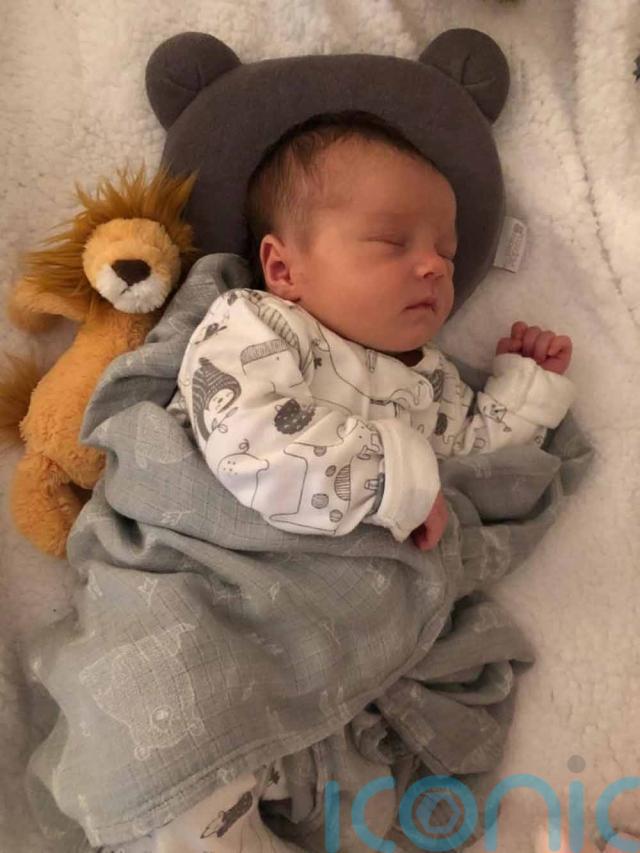 He added: “We’d spoken to this person for months and months, but we’d never met. And suddenly she was standing in front of us and we felt like we knew each other.

“The first experience was amazing and the more time we spent together we realised this was the perfect person.

“It was just unreal to be together at that point. It was like meeting an old friend that you’d never met in person before.”

With Covid restrictions still prevailing, she generously opted to go without her own support person during labour, so that both Ola and Edvin could be present in the delivery room as she gave birth to little Zoe.

Edvin said: “The doctors and nurses were amazing.

“From the very moment we walked in, they didn’t treat us as anything other than the parents of our daughter.” 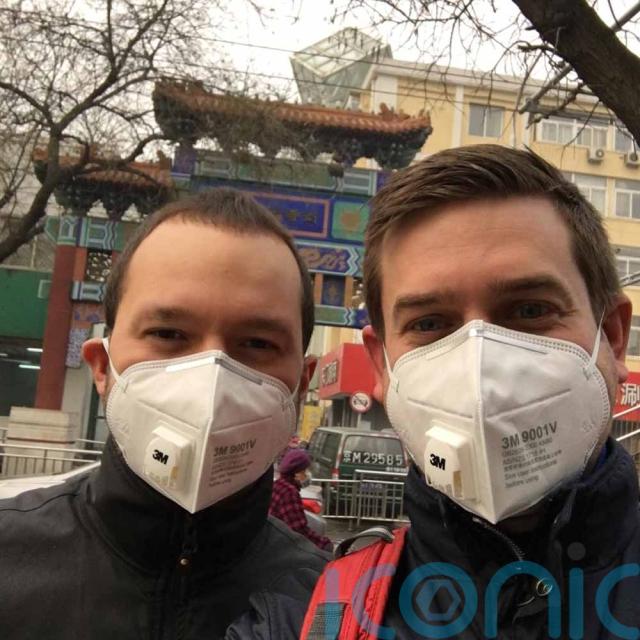 He added: “Zoe’s surrogate was also incredible. She was so generous with us.”

After spending three further fraught weeks in the USA sorting out legal paperwork, the new fathers were finally able to return to Sweden with their baby girl.

Zoe is now one and her dads are determined she will know all about the extraordinary process that brought her into the world.

They still speak to their surrogate every few weeks, video call her with Zoe and are planning to attend her wedding in Mexico next year.

Edvin said: “This person is a part of our family. She is someone who has gone through one of the most important times of our lives with us.

“Apart from getting married, this is the single most important part of our life yet.” 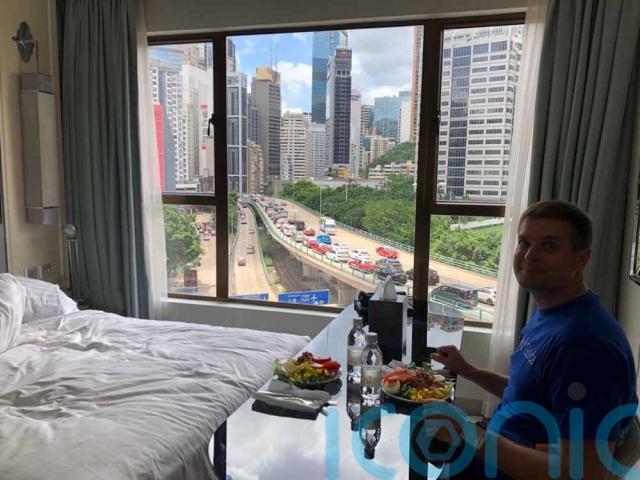 He added: “She was with us through the whole process. She is a family member, she is someone we think about with great gratitude and amazement for what she did. All the appointments, juggling her own life with kids, family, job and still keeping in close touch with us.

“She is just a superwoman, a superhero for us and will always be one of the most central figures in our lives and Zoe’s as well.

“These women are amazing, with huge hearts who set their lives aside to make someone else’s dream of a child possible.”

In UK law, people cannot pay a surrogate except for reasonable expenses. Also, surrogacy agreements are not enforceable under UK law, even if people have a signed document with their surrogate and have paid their expenses.

According to Kingsley Napley, a London-based law firm with a reputation for cutting-edge surrogacy work, while surrogacy arrangements are unenforceable in England, they are legal and enforceable in an increasing number of other countries, such as certain states in the USA, India and Ukraine.

The cost of international surrogacy varies greatly from country to country, according to non-profit UK-based professional surrogacy agency Brilliant Beginnings, which cites a range of between £40,000 and £200,000 depending on where you go.

But, despite the huge personal and financial cost, Ola and Edvin are considering following the same process again to add to their family.

Now working as the international coordinator for Hatch, helping intended parents through the process of international surrogacy, Edvin said: “Going through the surrogacy journey and realising what it did for me, I realised I would love to assist others to help them reach their dreams.

“I turned to the Pacific Fertility Center Los Angeles, who are an amazing clinic, to see if I could help them and I got offered a role and feel so privileged to be a part in other intended parents’ journeys.”

He added: “It was a challenging process, but I don’t regret any of it, as it brought us Zoe, new family members, a community and a new career that I’m so passionate about.”

* Edvin will be speaking at the Growing Families Surrogacy and Fertility Conference in London on March 19.