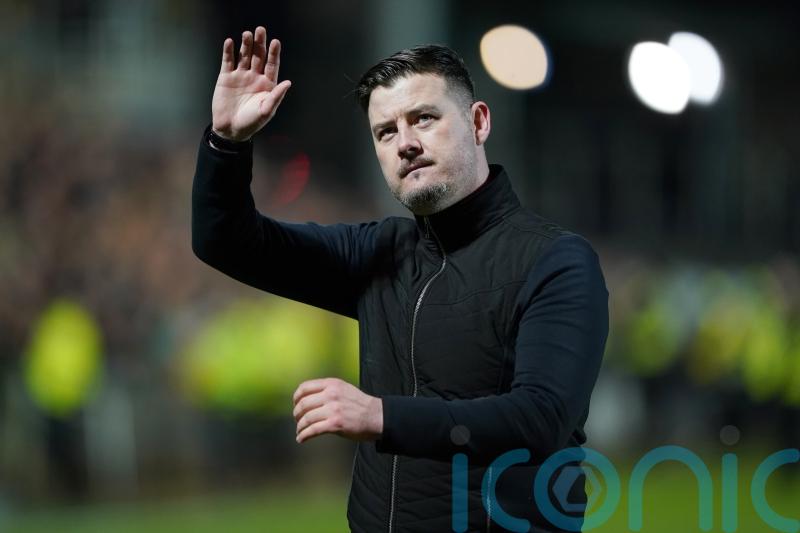 Tam Courts defended the actions of Dundee United’s fans before, during and after their 2-1 win away at Ross County in their final match of the cinch Premiership season.

Kick-off was delayed due to a number of pyrotechnics being thrown on to the pitch, which also happened after United equalised through Nicky Clark’s penalty in the second half.

When Clark scored a late winner, the travelling support spilled on to the pitch, an act they repeated when the full-time whistle confirmed they would finish fourth in the league table.

United boss Courts, though, praised his side’s fans for the backing they gave their team and said they can be forgiven for being “a little overzealous”.

“It just seems to be the way that the fans want to showcase themselves in a carnival atmosphere,” Courts said.

“The fans pitched up today, they were there in huge numbers and they gave us tremendous backing.

“They obviously wanted to showcase the fact that they were there, and we certainly felt their presence.

“Dundee United fans have been so starved of success for a club of this size for some time now.

“They have given absolutely everything to us home and away this year, hence bringing a few thousand of our own fans.

“I think they can be forgiven for being a little overzealous, because they just wanted to give their support to the players and we felt that today.”

Several scorch marks from the flares were visible on Ross County’s pitch, and Staggies boss Malky Mackay – who earlier in the week had urged fans to show their support in a safe manner – called for tougher measures to prevent similar issues in the future.

“What it did was gave us a great atmosphere, with them bringing so many fans with them,” Mackay said.

“But that safety aspect, with pyrotechnics coming on, is something that needs to stop in Scottish football as it can hurt people.

“People have actually got to lift those off the pitch, and they are 500 degrees. I really don’t enjoy that at all, and it happened too much.

“I’m fine with the party atmosphere and people spilling on and off, as it’s one of those days, but the pyrotechnics need to be looked at and addressed in Scottish football.

“People are behaving in a certain way now they are back at football, which didn’t really happen before.

“It’s something that across the board isn’t acceptable, if we are talking about safety at football clubs, and respect at grounds for anything and everything.”