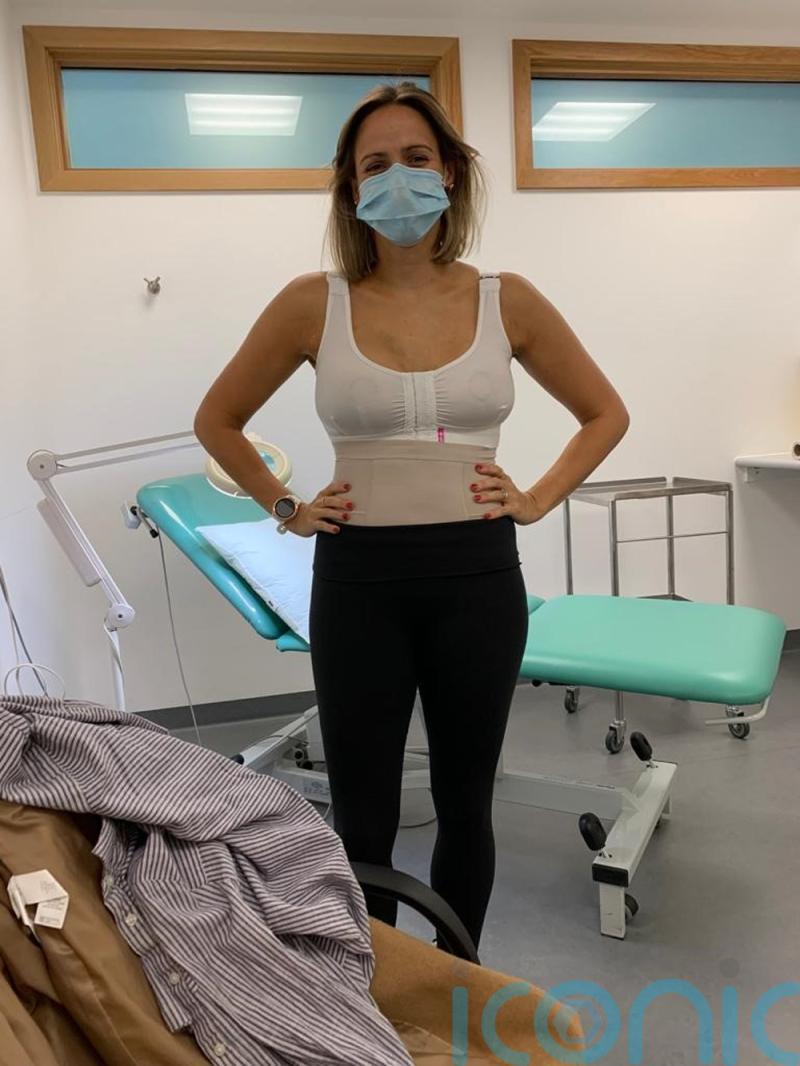 An ICU nurse who was eight when her mum died from breast cancer and is desperate to see her sons grow up has had life changing surgery to remove her breasts and ovaries after inheriting the BRCA1 gene mutation making her more susceptible to cancer in both.

Ruth Cookson, 34, lost her own mother Monika Harrison in 1996, aged just 41,  but her own fear of dying young only hit after her first son Seb, nine, was born in July 2012, prompting her to go for genetic testing a few months later in September.

Ruth, who has another relative who is a breast cancer survivor, was told she had the BRCA1 gene mutation in December 2012, which increased her risk of developing breast cancer to 80 per cent and ovarian cancer to 45 per cent and decided she would have preventative surgery to remove her breasts and ovaries once her family was complete. 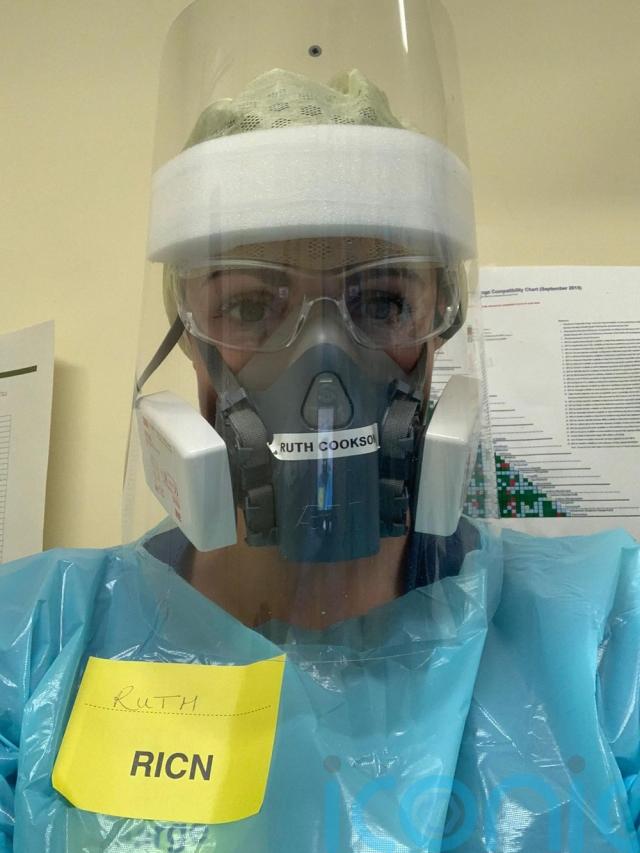 Now mum to Seb, Lucas, eight, and Theo, four, Ruth, who lives with them and their physiotherapist dad Patrick Cookson, 40, in Bristol, said: “My risk of breast cancer has reduced from 80 per cent down to less than the population risk, at around 12 per cent, and my risk of ovarian cancer is now zero because I don’t have any ovaries.

“I feel like I can finally breathe. All I want to do is live for a long time and I know I’m not in control of that, but these operations have given me the chance to be here for a lot longer.

“My mum missed out on everything and I don’t want to miss anything.”

She added: “My God, recovery was hard, but I would do it a million times over in order to have a future with my family.”

An only child, Ruth cherishes her memories of her early years with her mum, a fellow nurse, but is determined that her boys will continue to make memories with her until they are adults with children of their own. 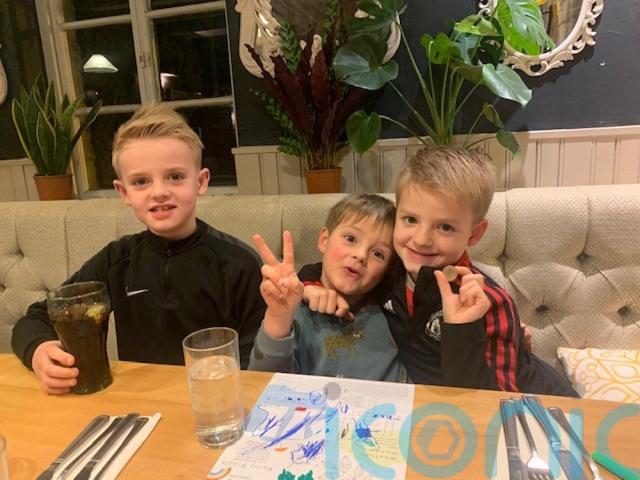 Ruth added: “I don’t remember much, but I remember her on the sofa with the cat or at birthday parties and I remember a trip to Florida, just me and her.

“I remember the day she died. It was a Sunday morning and the phone rang at 7.30am and my aunt, grandma and everyone was at my house.

“I just knew Mum had died. My dad answered the phone and then came and told me and I just remember running to my room and crying.” 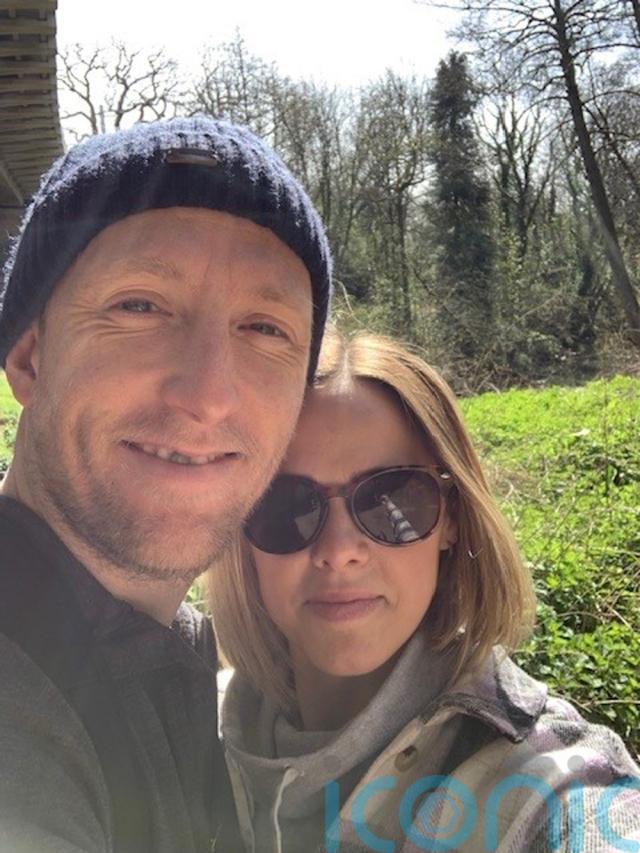 Simultaneously, another family member was having treatment for breast cancer and, luckily, survived, although she still finds it difficult to talk about, according to Ruth.

She said: “I think she finds it very hard that she survived while my mum died.”

Devasted by Monika’s death, Ruth never allowed herself to think too much about cancer, or the possibility that she, too, may be at risk. 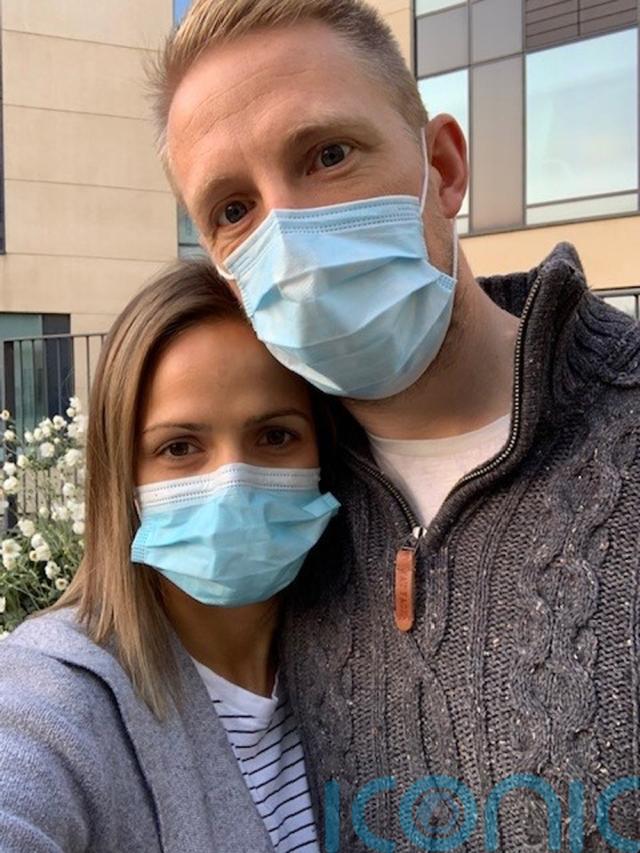 But becoming a mother in 2012 changed everything.

She said: “When I left home at 19, I didn’t really want to know about it all and I was adamant I didn’t want to be tested to see if I had a gene mutation.

“I think I probably just distanced myself from it as a coping mechanism.” 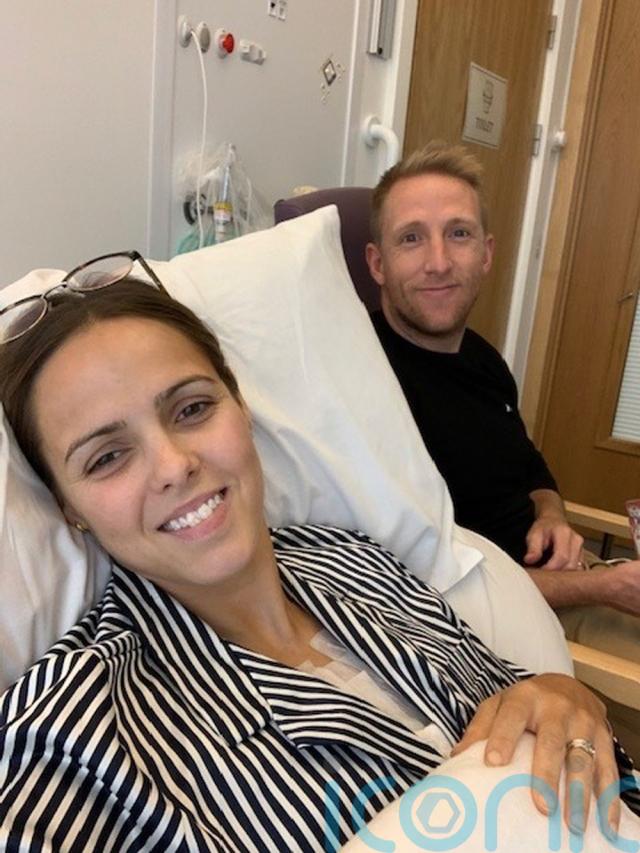 Ruth added: “Then, when I got pregnant, it was a no brainer. I knew my child was going to need me and felt a duty to do all I could to make sure I would be there for as long as possible.”

Seb was born in July 2012 and Ruth went for genetic testing in the September, receiving her positive result at the end of the year.

She said: “I’d resigned myself to the fact I had it, but I didn’t think I would be so emotional when I found out.  I just cried when they told me.”

Ruth added: “While I knew I probably had it, there was still part of me that hoped I didn’t.

“Once I heard, I knew straight away I would have a mastectomy.”

Only 25 when she had her first child, Ruth decided to wait until she completed her family before having the preventative surgery. 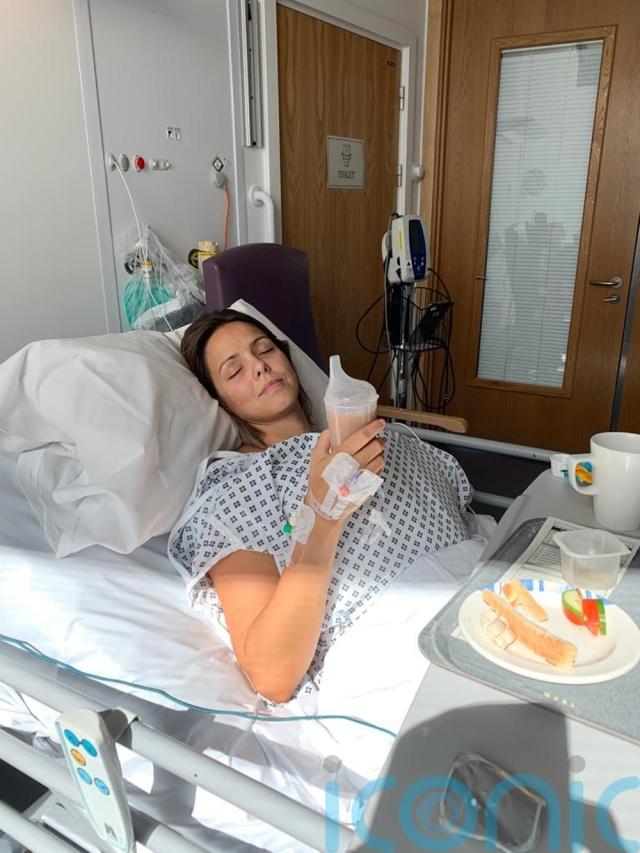 She said: “I think because my mum wasn’t diagnosed until she was 36, I thought I would be okay until then.

“I always checked my boobs regularly and went to my smear tests, but I did feel almost secure that she was in her mid 30s when she was diagnosed, so until then I would be safe.”

After her third son was born in 2017, Ruth started to consider her options. 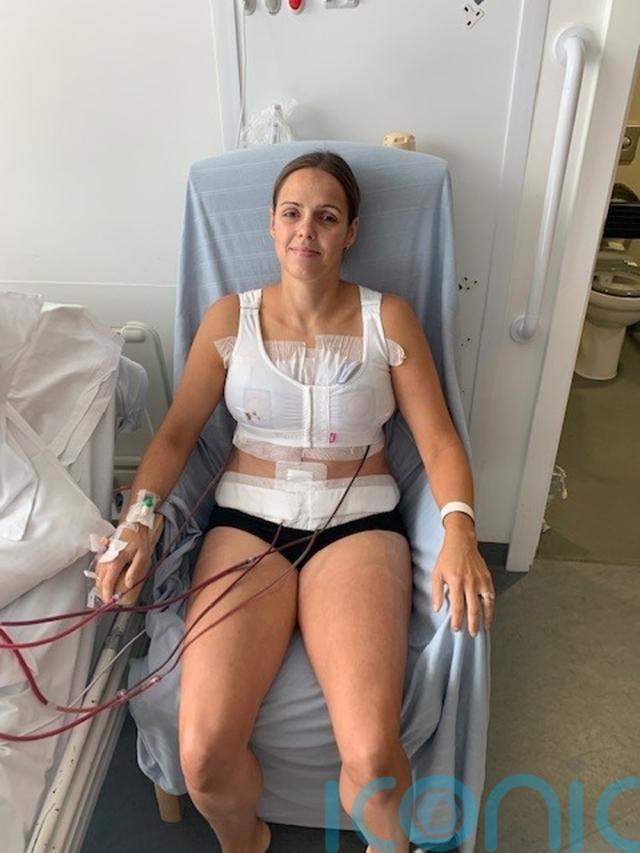 “I had my babies and it felt like the right time, so I went back to my genetics team,” she said.

“Seeing my eldest son reach the age I was when I lost my mum was so difficult, because I just kept thinking, ‘That was me.’

“The doctors referred me to the breast care team and I had to see a psychologist to discuss how my body would change and if I had a good support network. Then they gave me the go ahead for the risk reducing surgery.”

After consultation, Ruth decided to have a double, bilateral mastectomy with reconstruction surgery, using the tissue from her lower belly to create new breasts.

Frustratingly for Ruth, the pandemic in 2020 created an unexpected delay, as her surgery was postponed and she was busy working on the intensive care wards.

She said: “At work, it was like I could close the door to everything that was happening and just look after the person who needed me in that moment. I understood why my surgery was delayed, but I was so frustrated because I just needed to have it. ”

Thankfully, in September 2020, Ruth was booked in for the double mastectomy and 10-hour reconstructive surgery at Southmead Hospital Bristol.

She said: “The night before, I baked brownies for the boys and got them sweets, magazines and wrote them a letter, which they probably didn’t even read, but just to let them know I would be all right.

“The hardest thing was that my husband couldn’t come in with me because of Covid.”

She added:  “I told the nurses and the doctors that I was really scared and I cried.

“They all just held my hand and looked after me and it was okay.”

While the recovery post operation and surgery was incredibly painful, Ruth said she immediately felt relief. 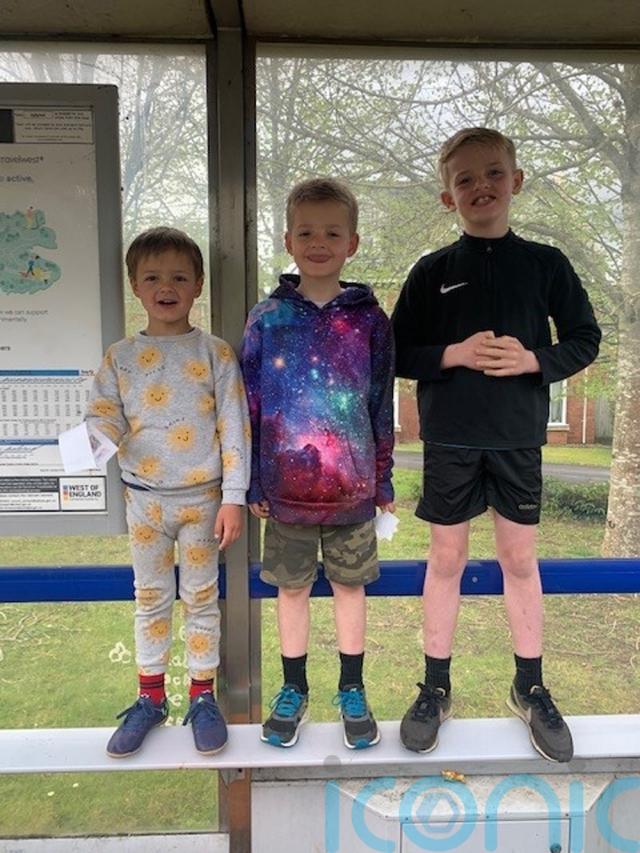 She said: “Everything was gone, all my breast tissue and my nipples and the risk of me getting breast cancer is really significantly less.

“I have a scar just below my bikini line that goes from hip to hip from where the tissue was removed for reconstruction, so I couldn’t eat or even stand for four weeks straight.

“It was really painful and a physically demanding healing process, but I would do it a million times over to help secure a future with my family.” 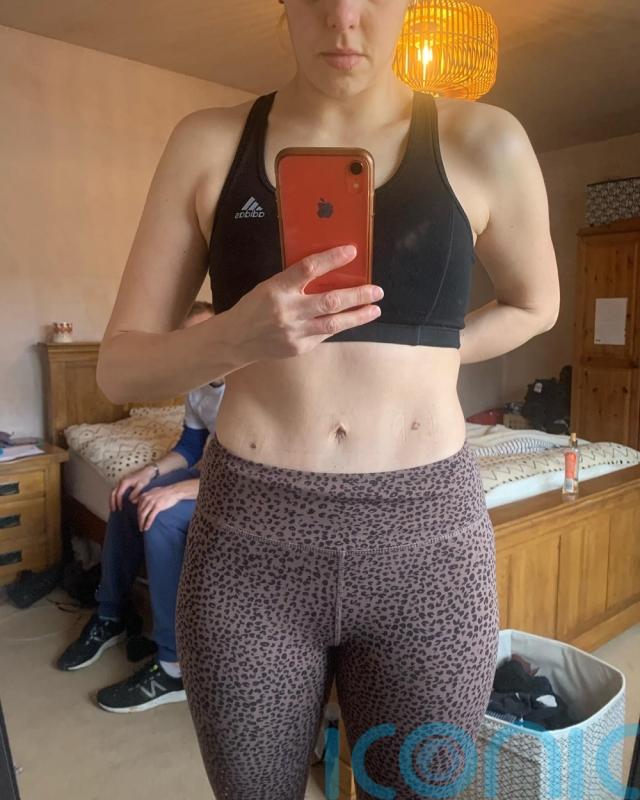 While Ruth never questioned having a mastectomy, she debated whether to go through with surgery to remove her ovaries, knowing it would send her into surgical menopause.

She said: “On so many occasions, I nearly cancelled the operation.

“I was so frightened of surgical menopause, because I’m only 34.” 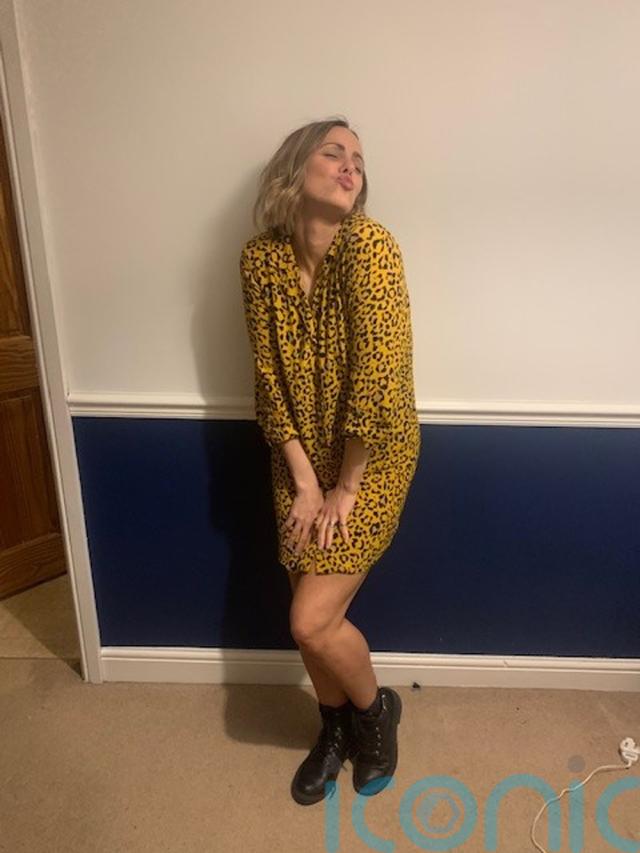 She added: “I looked into all the possible alternatives, like blood tests and abdominal ultrasounds, but then I saw a girl on Instagram who had been preparing for a preventative mastectomy when she found out she had breast cancer.

“At that moment, I was like, ‘What am I doing? I am being offered a chance to reduce my risk of ovarian cancer to zero, so why would I not take it?'”

While Ruth was similarly scared to have the surgery, it was the thought of her boys that pushed her on.

She said: “I just love my babies and I want to be there for all the things that my mum couldn’t be there for.

“I asked lots of questions, read so much about the operation and listened to podcasts.

“I knew that whatever happened, I would find a way to deal with it.”

Ruth had surgery in January this year, at St Michaels Hospital in Bristol and, so far, has no symptoms from the surgical menopause, as she is taking hormone replacement therapy (HRT) and feels the operation has removed another weight from her shoulders.

She said: “I just really think my body’s amazing. As cringy as it is, my body has been used to reconstruct a new pair of boobs, it’s healed itself and I’m just really grateful for what she’s done.

“It’s been a hard few years with the operations and work, but I feel great.”

Now, she is looking forward to going away next year abroad somewhere with the boys as well as enjoy being out and about with them.

She said: “I have changed jobs to do research nursing in intensive care, so I now work regular hours, so I can be there for my boys.

“I want to be there every weekend for my children and in the evenings and to do things with them.” 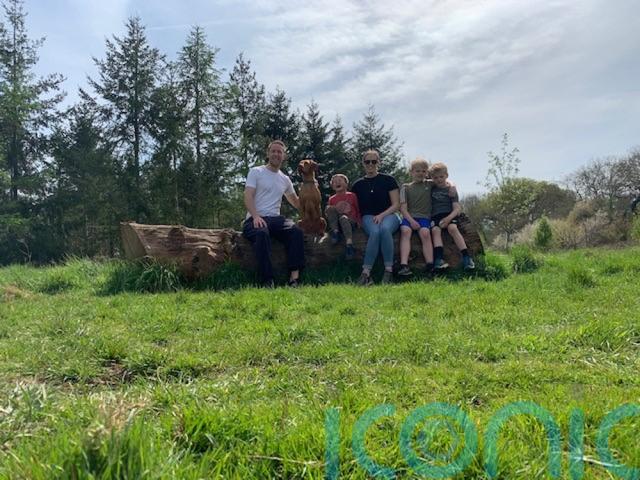 She added: “I want to be there for everything and this surgery means I no longer live with the fear that I won’t be.

“I love just watching them play football every weekend for matches and training and going out with them for long walks with our dog Barley.

“I am sure there will be other struggles as life goes on, but I just feel free now .”

Ruth, who has been documenting her journey on her Instagram @mymastectomyandme  hopes she can help to inform and reassure other women going through the same experience.

She said: “I found it really hard to find young women like me, not celebrities, that I could relate to.

“I just wanted to share my story, hoping that it might give people someone to relate to, to ask questions of and to support them.

“That is all I have ever wanted.”