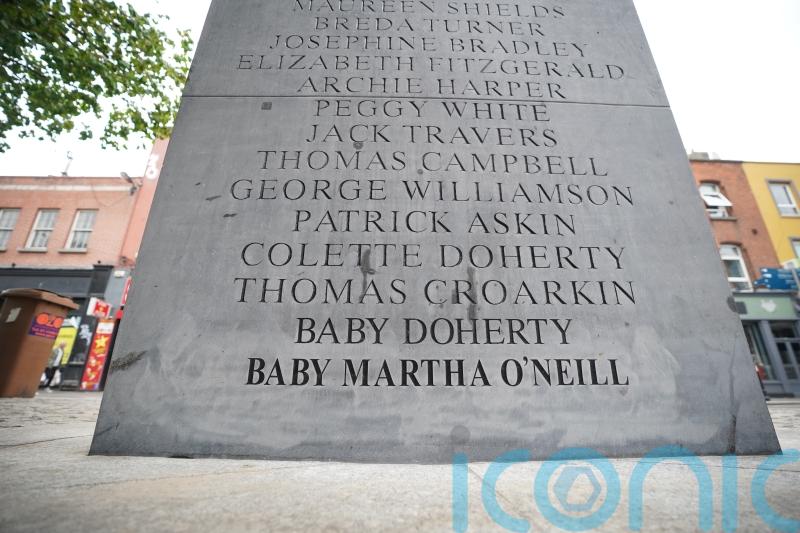 The 35th victim of the Dublin/Monaghan bombings has been acknowledged on the official memorial in the Irish capital.

Martha O’Neill, whose husband Edward was killed in one of the blasts in Dublin and two sons injured, lost her unborn baby girl Martha in the aftermath of the atrocity.

She was one of two unborn babies who died – victim Colette Doherty had also been pregnant when she was killed.

No-one has ever been convicted over the series of four no-warning bombs in Dublin and Monaghan on May 17, 1974 – which have been blamed on loyalist paramilitaries.

Martha O’Neill junior’s name was added to the memorial on Talbot Street in Dublin earlier this week.

Edward O’Neill junior, said his mother, now aged 80, is delighted by the inclusion.

“My mother was heavily pregnant at the time, she was having a healthy pregnancy and as a result of shock and trauma of my father’s murder and the injuries to myself and my brother, she ended up having a stillborn baby,” he told the PA news agency.

“She has now been acknowledged as a victim of the bombings.”

“There were a lot of people involved behind the scenes, but Ruairi O Cuiv and Brendan Teeling went above and beyond as far as I was concerned to help us out and make it happen,” he said.

Mr O’Neill was just five years old when his family travelled to the city centre to get haircuts before his brother’s first communion, which had been due to take place the following day.

He described walking out of the barber shop with his father holding both him and his brother by the hand when the bomb exploded.

“I’ll never forget it, my dad was swinging me on his left hand, he had my brother by the right hand… my brother jumped up and grabbed a button out of his jacket, as he went down to pick it up the bomb exploded,” he said

Mr O’Neill is still receiving treatments for the serious injuries he received that day.

Earlier this week, he underwent his 64th operation to correct those injuries from almost 50 years ago.

The O’Neill family has been supported by victims group SEFF.

In a statement, SEFF said the family are very appreciative to Dublin City Council for their efforts in ensuring that this has happened.

“We commend the O’Neill family for their perseverance on this issue, Baby Martha was denied her basic right to life due to the actions of terrorism on 17th May 1974, such was the trauma experienced by her Mummy (also Martha) that Baby Martha was stillborn,” they said.

“At SEFF we have already remembered Baby Martha via a patch included on one of our Memorial Quilts.

“We commend the O’Neill family and also Dublin City Council for righting a wrong.”