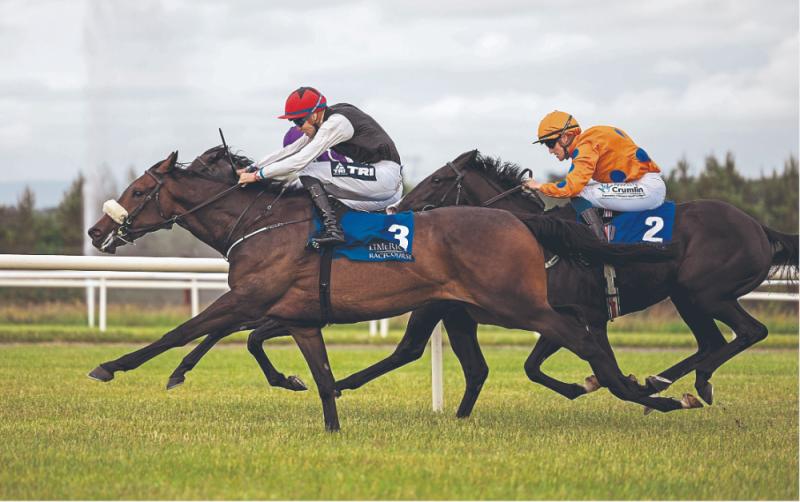 Johnny Feane landed a notable success as the Reggie Roberts-owned Urban Oasis won the €100,000 Boylesports Ulster Derby at Down Royal on Saturday.

The 9/1 chance was last of the seven runners in the early stages after missing the break but he came through to lead inside the final furlong under Jamie Powell to win by a length and three-parts from the Aidan O'Brien-trained 6/4 favourite Cougar.

Feane said “We have had a couple of Listed winners over the years but this could possibly be the most valuable race we have won. There’s a handicap for three-year-olds over a mile and six furlongs at the Ebor meeting at York and we’re looking at that.

We’ll freshen him up for that and he’ll get into it all being well. A galloping track will suit him.”

Levins was among the winners at Limerick on Friday evening where Salt Whistle Bay led home a 1-2 for the stable in the opening claiming race over the extended six furlongs. A 14/1 shot under Dylan Browne McMonagle, the eight-year-old led in the final strides to deny his own stable companion Tai Sing Yeh by half a length. The runner-up was claimed by trainer James McAuley.

The outsider of the trio in the betting at odds of 11/4, she easily picked up her rivals inside the final furlong to win by a length and a quarter with Aidan O'Brien’s Galleria Borghese filling the runner-up spot.

McCullagh enjoyed a second success as L’un Deux Trois won the 11-furlong handicap for trainer Oliver McKiernan. It was far tighter this time as the 9/1 shot got up on the line to deny the Pat Flynn-trained Tudor Manor by a nose in the Keep The Faith Syndicate colours.

Seamie Heffernan added to his Leopardstown double when taking the two-mile one-furlong handicap on Aidan O'Brien’s Waterville. The even money favourite raced clear over a furlong from the finish to win by an easy six lengths from the Karl Thornton-trained Rich Belief.

Kieran Cotter was an early winner at Down Royal on Friday evening where 16/1 chance Tiny Bit landed the five-furlong handicap in good style.

Declan McDonogh’s mount lost ground at the start but closed on the leaders from over a furlong out and came through to win by two and a half-lengths from the Denis Hogan-trained 5/2 favourite Super Club in the colours of owner Bernie Callanan.
The fillies and mares’ handicap, again over the minimum distance, went the way of the James McAuley-trained Sister Rosetta.

The outsider of the seven-runner-field at odds of 25/1, the four-year-old made all the running under Gary Carroll to beat 5/2 favourite Curraheen Princess by a length and a half in the trainer’s own colours. Ger O’Leary won the seven-furlong maiden with 9/2 chance Chesterton which was ridden by Jake Coen.

Owned and bred by Sue Lenehan, he ran out a two-length winner over the Willie McCreery-trained 10/11 favourite Are We Dreaming.

Seamie Heffernan rode the winners of the first two races at Leopardstown on Thursday evening.
Kevin Coleman saddled the first of them as With Love, in the colours of Atomic Racing, took the seven-furlong two-year-old race in fine style.

The 2/1 joint-favourite led inside the final furlong to beat his main market rival, Voce Del Palio.