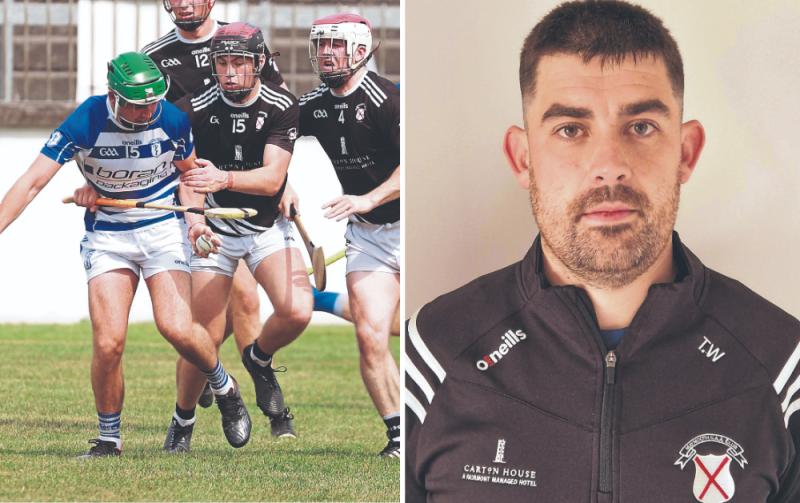 Maynooth face the almighty challenge of toppling one of the most dominant teams in Kildare sport, the Naas hurlers — county and All-Ireland Intermediate champions, and Maynooth manager Tom Walsh is fully aware of mammoth task on their hands come county final day.

Walsh said of his side’s final opponents “Naas are the standard bearers in Kildare the last two or three seasons. I was saying to the lads, the whole reason we play sport is to play the best teams. We will absolutely relish that and we will go hammer and tongs at it as we prepare for the final.

“On county final day we want to walk around behind that band, hear that music and absolutely give it hell for leather for 60 minutes.”

Walsh’s men weren’t fancied to beat Celbridge in their semi-final clash but the underdog moniker did them no harm that day as they outworked the talented Celbridge outfit.

The determination late on coupled with some superb free-taking, under pressure, from David Qualter, meant Maynooth progressed against the odds.

“It’s only twelve months ago that we were down in the rank below in intermediate. We felt we had something to prove, we battled hard for three or four years before this to come up. I said it this time last year that we’d have a mark on the senior championship and we have certainly left it” Walsh said following the Celbridge win.

Despite the fairytale journey to the final, Walsh was quick to rule out the idea that just getting to this final was a bonus to take from this season for Maynooth.

“Possibly at the start of the year we thought it would have been” (a step too far to reach a final) “but when we beat Ardclough we said to them, on the pitch there and then, that it is possible,” Walsh said.

“We really felt we could go all the way. A lot of people would have said it was a bonus, our first year up, but we didn't see it that way. We are not going to shy back from Naas in a final, we are going flat out to win it and we will be gutted if we don't. We don’t see it as bonus territory.”

Maynooth face a Naas side that have dominated their Championship games so far. They will need another stellar performance, even above what it took to beat Celbridge, to topple Naas. However, nobody watching this team operate could ever question their self-belief and hard work in any game.

“We (Maynooth) are mentality strong. We have had this all year, we played Ardclough here in the prelim round and they took us to extra-time. We were down four or five points after they got two quick-fire goals in extra time. Our guys never panicked, like against Celbridge, there was no panic. They knew if they were close coming down the home straight they’d be in a final in a couple of weeks,” Walsh said.

“We like to think we are an industrious team. There is no room for egos here, we go out and we work hard. The guys around the middle eight, half-forwards, half-back, midfielders just work so hard. We knew if we were there come the final stages we would have a big say.”

The Celbridge result gave Maynooth a famous upset win and their first senior county final since 1943. They will face Naas as they look to pull off a shock Senior Championship win.