Sister act will be hoping to lead Kilkenny to glory

Family fortunes: Steffi and Tiffany Fitzgerald will represent Gowran with pride on Sunday 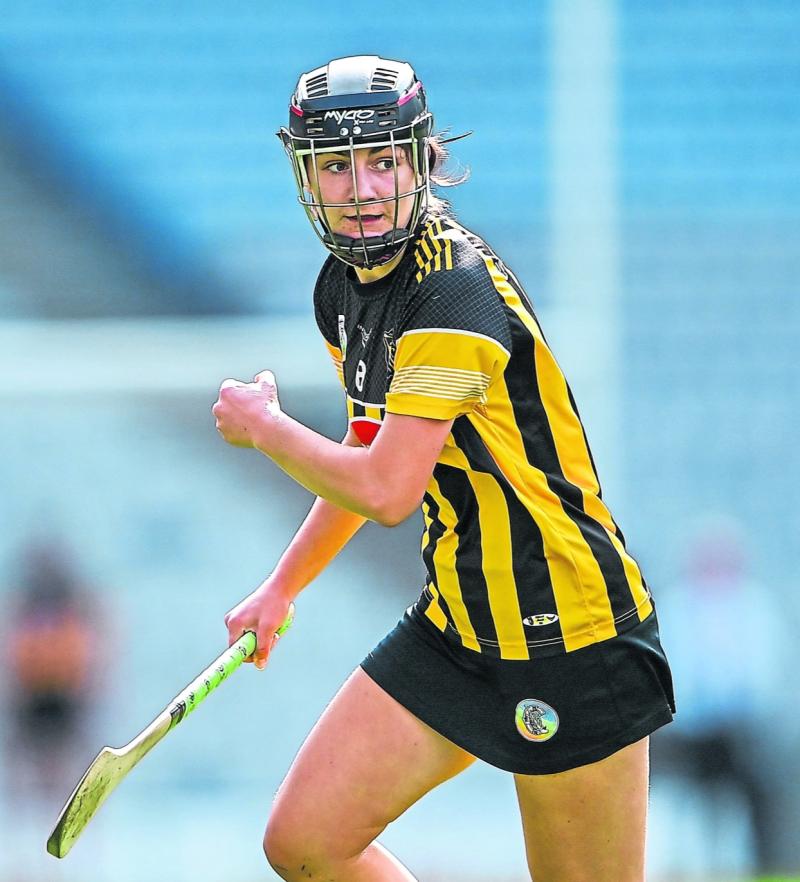 Steffi Fitzgerald has been a key component in what has been a solid Kilkenny defence this season. Picture: Piaras Ó Mídheach/Sportsfile

The latest chapter in the long line of successful Kilkenny camogie sisters could be added to the county’s sporting story this Sunday.

Gowran will hope to have representation not once but twice in the starting 15 for Sunday’s final as Tiffany and Steffi Fitzgerald set their sights on capturing the O’Duffy Cup on Croke Park.

The duo, who have been regular starters throughout the year for Brian Dowling’s charges, could be the first Gowran players to feature in the final since four-time All-Ireland senior medal winner Peggy Muldowney (née Carey) started the 1981 decider.

And, if that comes to pass, it will be first time that a member of the Young Irelands camogie club will have started an All-Ireland senior final since the club was formed in 1994.

The progression of the Fitzgerald sisters is a tribute to their hard work and continuous improvement to their game as they stand on the verge of starting for Kilkenny in Sunday’s All-Ireland final.

The pair have won plenty of silverware over the past five years having earned All-Ireland honours with Loreto Kilkenny and county titles with Young Irelands. They have also won silverware with the county, but victory on Sunday would be the pinnacle of their achievements so far.

Steffi won both senior and junior colleges titles with the Loreto in 2017 and 2018, while she was also on the Loreto team that retained the Senior All-Ireland in 2018.

Tiffany was on the Loreto panel that won junior and senior All-Irelands in 2017 and 2018 respectively.

In 2020 she was a starting member of the Loreto team that regained the senior All-Ireland with fellow county senior panelist Ciara O’Keeffe the winning captain on that occasion.

Young Irelands were starting to enjoy plenty of success also and the two sisters, along with O’Keeffe, were central to the club’s minor Roinn A championship victories in 2018 and 2019.

The Young Irelands camogie club has made great strides in recent years, as evident by the success attained. The club has also won junior and intermediate county titles in 2016 and 2018 respectively and reached a Leinster intermediate final in 2018.

The three girls have certainly been a major part of the club’s success and they will have a prominent role to play in continuing the progression going forward.

Now in her fourth year with the senior set-up, in 2020 she was part of the Kilkenny panel that won the All-Ireland, bouncing back after tasting defeat the previous three years(2017, 2018 and 2019).

Steffi featured throughout that championship run which included an appearance as a half-time substitute in the All-Ireland semi-final victory over Cork.

She became a more regular figure last year, particularly in the league final victory over Galway, a thrilling contest which was played in Croke Park.

She struck over a superb point from 40 metres near the sideline to give Kilkenny the lead and, after Denise Gaule doubled the advantage with a pointed free, Steffi was involved in the final act as she turned provider with Mary O’Connell popping up to land the final point.

It was proof that she had fully arrived as an established county senior member. On that Sunday night in Croke Park she thrived superbly in a pressure situation.

That progression has continued into 2022 where, along with her sister Tiffany, she is now a regular feature in the Kilkenny starting line-up.

Earlier this year, Steffi played a central role for DCU as they strolled to their very first Ashbourne Cup triumph.

At one stage throughout the academic year the sisters had a most rare occurrence of being on the same pitch - but on different sides!

The two played against one another in a third level match with Tiffany in action for NUIG. Unfortunately for her she was on the losing team that lost the Purcell Cup final. 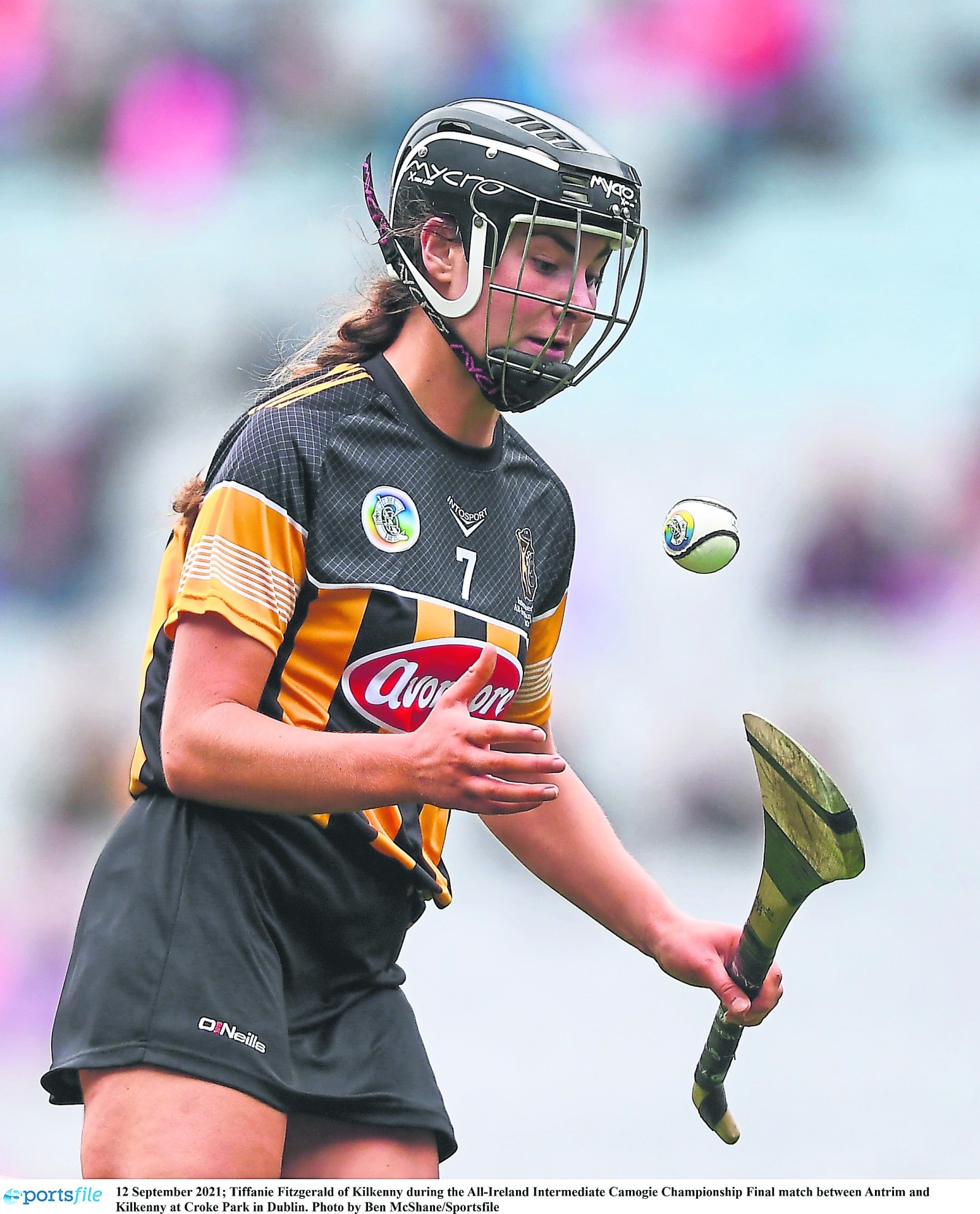 Tiffanie Fitzgerald in action for Kilkenny in the 2021 All-Ireland intermediate camogie final against Antrim. Her performances saw her drafted into the senior set-up Picture: Ben McShane/Sportsfile

Tiffany impressed greatly in her intercounty adult debut year last year when she featured on the Kilkenny intermediate team that went all the way to the All-Ireland final before losing out to Antrim.

Last February, she made her senior county debut for Kilkenny in the National League opener against Limerick. She has been an ever-present on the team since, giving a series of solid performances.

Tiffany and Steffi’s grandmother Beatrice Treacy was one of the great loyal servants to Young Irelands and Kilkenny Camogie for several years and, indeed, a wonderful servant to the Young Irelands GAA club in general.

Beatrice was a selector with the 1974 All-Ireland team. She also served as secretary of the county camogie board from 1972 to 1976 and was chairperson in 1977.

Beatrice’s husband Paddy Treacy has been a wonderful and loyal long-serving supporter of Young Irelands and Kilkenny hurling and camogie teams and along with Peggy Fitzgerald, Tiffanie and Steffi’s other grandmother, they are two of the girls’ greatest supporters. Both will be hoping to be in attendance in Croke Park on August 7.

Peggy’s late husband Jim Fitzgerald was also a loyal long serving member and supporter of Young Irelands, He would, no doubt, have been very proud of the girls progression.

It’s a huge day for the Young Irelands club with Ciara O’Keeffe also part of the panel, while Pat O’Neill is part of the backroom team.

Ciara, along with Tiffany made her intercounty adult debut with the county intermediate team that reached the All-Ireland final against Antrim. She also featured with the Kilkenny intermediate team this year along with being part of the Kilkenny senior panel. Both Ciara and Tiffany came through the underage ranks together, enjoying All-Ireland success with Loreto Kilkenny, while they were also part of the Young Irelands team that won consecutive county minor titles in 2018 and 2019.

She was also captain of the Kilkenny minor team in 2020, with Tiffanie as vice-captain, but the Leinster and All-Ireland championships were severely affected due to the pandemic restrictions. They have bounced back from that disappointment and are now only 60 minutes away from winning an All-Ireland medal.

Pat O’Neill has become a vital part of the management team since coming on board in 2020. Initially, he was brought in as a defence coach, but subsequently has had a broader role in the coaching set-up.

His experience of playing for Kilkenny and winning senior All-Irelands has been a major factor in the backroom team which also features Philly Larkin and Tommy Shefflin. Their expertise and knowledge has been well received and well respected by the squad.

Since the pandemic began in March 2020, Kilkenny have lost just once in league and championship and that was last year’s All-Ireland semi-final to Cork. They have unquestionably become a tough nut to crack, which is a huge testament and tribute to the management team.

It’s one of the biggest days in the history of Young Irelands camogie club and with the juvenile section of the club represented in huge numbers at the semi-final against Galway, no doubt a bigger crowd will be heading for Croker on Sunday.

The camogie club has organised a supporters bus for Sunday’s game so there will surely be huge support from the parish in attendance as they cheer on the Young Irelands contingent and the rest of the Kilkenny squad in their quest to regain the O’Duffy Cup.