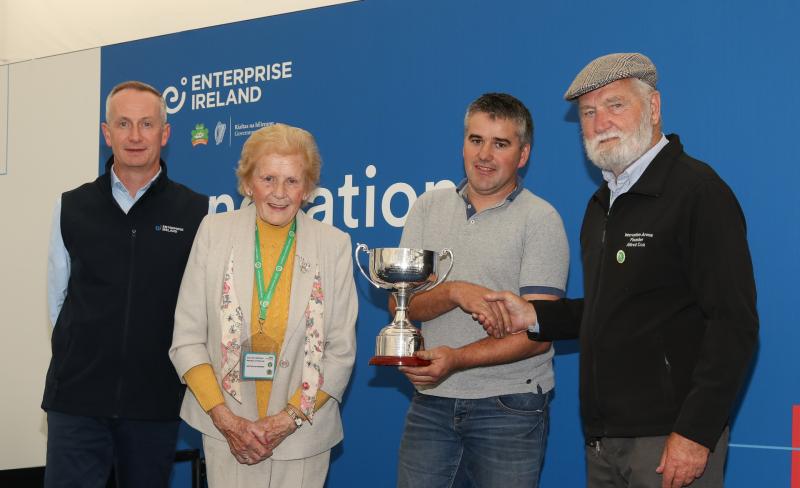 Kilkenny’s PGM Technologies has won the Alfie Cox On Farm Innovation Award at the 2022 Enterprise Ireland Innovation Arena Awards at an international networking event, ahead of the National Ploughing Championships.

It's a low-cost maize establishment system that reduces the cost of growing maize, while also reducing the carbon footprint of growing the crop. This is achieved by using strip-till methods and the precise placement of liquid fertiliser in the seed trench.

From machine learning to on farm automation, the most innovative Irish agri-tech and agri-engineering products were this evening named by Enterprise Ireland CEO Leo Clancy and National Ploughing Association Managing Director Anna May McHugh.

Showcasing the future of Irish agri-tech, the Enterprise Ireland Innovation Arena Awards recognises innovative agri-tech and agri-engineering capabilities and new product development in the agriculture sector. A strong theme which emerged from this year’s Innovation Arena Awards was a focus on efficiency while also contributing to food security and the fight against climate change.

For the last two years, the Innovation Arena Awards have been held virtually. However, this year sees the return of the hugely popular live and interactive ‘Enterprise Ireland Innovation Arena’ at the three-day National Ploughing Championship, in Ratheniska.

In association with the National Ploughing Association, Enterprise Ireland’s Innovation Arena showcases ground-breaking agri-related products and innovations from 60 Irish agri-companies, including the winners of the 2020/21 Innovation Arena Awards.  And over 100 buyers and international media from 19 countries are also attending events at the Innovation Arena throughout the week.

“A strong farming heritage and cutting-edge technologies have made Ireland a global centre for agri-tech quality and innovation. By focusing on greater efficiency across every aspect of modern agriculture, Irish agri-tech businesses are delivering forward-thinking solutions to address some of the industry’s greatest challenges and changing demands. The positive impacts that these solutions will have on future global agriculture, particularly in relation to environmental, sustainability and digitalisation, are inspiring.

“These advances are reflected in today’s Innovation Arena Awards, which showcase the ingenuity and talent of Irish farm experts, entrepreneurs and businesses on a world stage. Congratulations to all the awards winners, and particularly Pearson Milking Technology as this year’s overall winner. At Enterprise Ireland we look forward to working with the winners and finalists as they start, innovate, and scale their businesses, grow exports internationally and create jobs in Ireland.”

“Congratulations to all of the Innovation Arena Award winners and particularly Pearson Milking Technology as the overall winner this year. This is a remarkable achievement given the high standard and calibre of entries being showcased this year.

“We’re delighted to collaborate once again with Enterprise Ireland on the Innovation Arena at the National Ploughing Championships, which provides an excellent opportunity for budding entrepreneurs and innovators in the agri-tech and agri-engineering space to showcase their product at Europe’s largest outdoor event.”