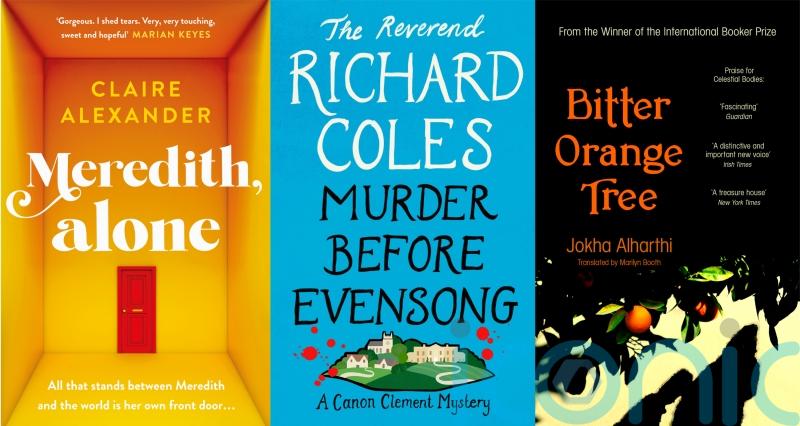 The second novel from the International Booker Prize-winning author, Bitter Orange Tree examines love in all its forms, across multiple generations of one Omani family. Zuhur is struggling to settle into university in England while grieving the loss of her grandmother back in Oman. Bint Amir was a central figure in Zuhur’s life, and it is her story, not Zuhur’s, that is central to the narrative. Flitting back and forth in time, we learn about Bint Amir’s childhood, her struggles, losses, withheld romances and eventual role as matriarch in a family to whom she is not related, but who will grieve her after she’s gone. Told from the disjointed mind of a grieving granddaughter, Alharthi artfully conveys the pain, both physical and emotional, that comes from mourning missed opportunity, and a time to which we can never return.
8/10
(Review by Scarlett Sangster)

Spending life confined to your home is a scenario that has become more familiar over the past couple of years, but Meredith, Alone, the debut novel from Claire Alexander, was conceived before the pandemic. The reader joins Meredith on day 1,214 of her self-imposed house arrest. She has her cat Fred, friend Sadie and a range of jigsaws to support her, but as more of the world starts to filter through the door of her Glasgow home, things start to change. Flashbacks to her former life build up the context for her current situation. Meredith is a likeable heroine who you can’t help but root for and, while some of the subject matter is traumatic, this is ultimately a book about hope and the power of friendship. A moving read which will leave you thinking about Meredith – even after you’ve turned the last page.
8/10
(Review by Eleanor Barlow)

It’s easy to compare this cosy crime tale with those of quiz master Richard Osman’s Thursday Murder Club series, and indeed there is humour and a nostalgic feel to each. Coles’s debut tale is set in a sleepy English village, Osman has his ageing amateur sleuths residing in a peaceful retirement village. So far, so similar. But the ex-Strictly star’s book is set in 1988 and has a different feel about it, as Canon Daniel Clement, the local rector, finds himself investigating the murder of a local, stabbed in the neck with a pair of secateurs. There are further murders, but the real heart of this book lies in Coles’ observations about the trials and tribulations of being a vicar (presumably taken from his own experience in Finedon, Northamptonshire); the diplomacy his churchman has to observe in handling spats among the community, the funny asides of parish life, and the wisdom he has so clearly gained in tending his flock. It’s written from the heart with an insider’s knowledge, and won’t look out of place on a beach this summer.
7/10
(Review by Hannah Stephenson)

In his latest collection of personal essays, humourist David Sedaris employs his usual dry wit to make light of the absurdity of life. The stories meld the mundane, silly and serious. In the essays about his father’s decline, Sedaris appears to be processing their complicated relationship, describing how he was made to feel worthless growing up. The reader might feel as though they are prying into deeply personal territory, and the faults Sedaris points out about those closest to him can make for uncomfortable reading. The author can also seem somewhat out of touch when writing about his multiple properties and taste for high-end fashion. But Sedaris should be commended for not skirting around sometimes ugly truths – and doing so in a highly entertaining way.
7/10
(Review by Sophie Wingate)

5. Onyeka And The Academy Of The Sun by Tola Okogwu is published in paperback by Simon & Schuster Children’s UK, priced £7.99 (ebook £5.99). Available now

Onyeka’s thick, Afro hair is impressive – but it is her biggest insecurity and a source of embarrassment. That’s until the day her superpowers are unleashed, and she discovers she can control her luscious mane with her mind. She is whisked off to the Academy of the Sun, a school in Nigeria where Solari, children with superpowers, hone their skills. Soon, Onyeka is enlisted in a fight alongside her friends to save the Solari – but as she battles with her superpowers and tries to unravel the truth about her father, who can she trust? From the moment you discover Onyeka’s superpower, this action-packed and fast-paced story has you gripped. Not only is the story empowering, but will resonate with many readers – and it has a tense and twisty plot.
9/10
(Review by Sharron Logan)

HARDBACK (FICTION)
1. Murder Before Evensong by Reverend Richard Coles
2. Master Of Furies by Raymond E. Feist
3. The Murders At Fleat House by Lucinda Riley
4. Lessons In Chemistry by Bonnie Garmus
5. Lion by Conn Iggulden
6. With A Mind To Kill by Anthony Horowitz
7. Young Mungo by Douglas Stuart
8. Bad Actors by Mick Herron
9. The Whalebone Theatre by Joanna Quinn
10. Elektra by Jennifer Saint
(Compiled by Waterstones)

HARDBACK (NON-FICTION)
1. The Escape Artist by Jonathan Freedland
2. Old Rage by Sheila Hancock
3. Becoming Molly-Mae by Molly-Mae Hague
4. Why Has Nobody Told Me This Before? by Dr Julie Smith
5. The Facemaker by Lindsey Fitzharris
6. Hope by Tom Parker
7. House Arrest by Alan Bennett
8. Russia by Antony Beevor
9. Regenesis by George Monbiot
10. Queen Of Our Times by Robert Hardman
(Compiled by Waterstones)

AUDIOBOOKS (FICTION AND NON-FICTION)
1. Why Has Nobody Told Me This Before? by Dr Julie Smith
2. From The Oasthouse: The Alan Partridge Podcast by Alan Partridge
3. Murder Before Evensong by Reverend Richard Coles
4. The Thursday Murder Club by Richard Osman
5. Buried For Good by Alex Coombs
6. Brothers In Arms by James Holland
7. Lessons In Chemistry by Bonnie Garmus
8. Atomic Habits by James Clear
9. Sun Damage by Sabine Durrant
10. Windswept & Interesting by Billy Connolly
(Compiled by Audible)