Mystic Squirrel to perch in Granard for solstice week 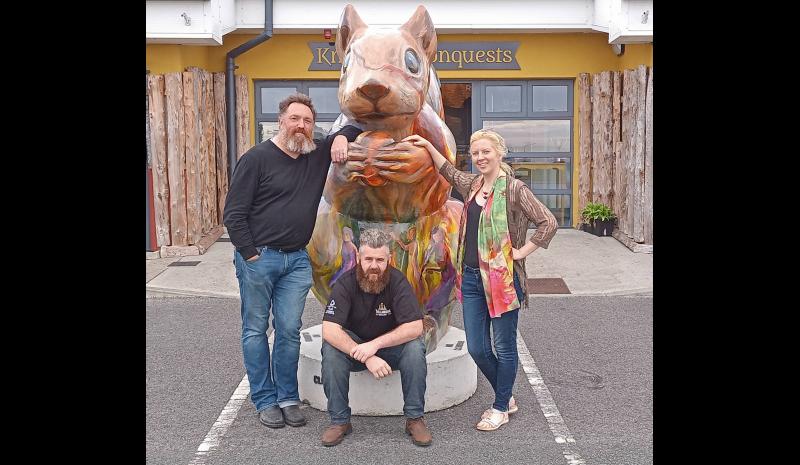 Tuesday, June 21, was the longest day of the year and the summer solstice and, to celebrate, one of the four Iora Nua installations has paid a visit to Granard.

Artist, Kevin Flood’s Mystic Squirrel arrived at Granard Knights and Conquests Heritage Centre last week and will be hanging around for the duration of Summer Solstice week.

“It is art to uplift any soul. You can’t help but smile. Each piece is unique and they just have to be seen. It’s art for the people by the people,” said Déirdre Orme, General Manager of Granard Knights and Conquests Heritage Centre.

“The amazing artworks were created by sculptor and artist Thomas Duffy and gifted their coats of inspiration by leading Longford artists Tom Duffy, Phil Atkinson, Mary Fleming and Kevin Flood.

“Mystic Squirrel is by Kevin Flood and he really allows the viewer a glimpse into our ancient past.

“Re-awakening the mystical landscape of olden ways and folklore. Isn’t it only fitting for him to be with us in Granard for the summer solstice?”

The Mystic Squirrel was one of three Iora Nua installations to be unveiled on the Market Square last month, alongside Mary Fleming’s T-1911 Terminator squirrel and Phil Atkinson’s Myths & Fantasy squirrel. Tom Duffy’s Mr Nuts was initially unveiled in Newtownforbes in February.

Iora Nua is a partnership project with County Longford Arts Office and is funded by the Creative Ireland programme and the Department of Tourism, Culture, Arts, Gaeltacht, Sport and Media.

All four Squirrels will ‘tour’ Longford this Summer before being placed permanently in Granard, Ballymahon, Longford and Newtownforbes.

Iora Nua will be on display at Knights and Conquests Heritage Centre for the rest of Summer Solstice week.