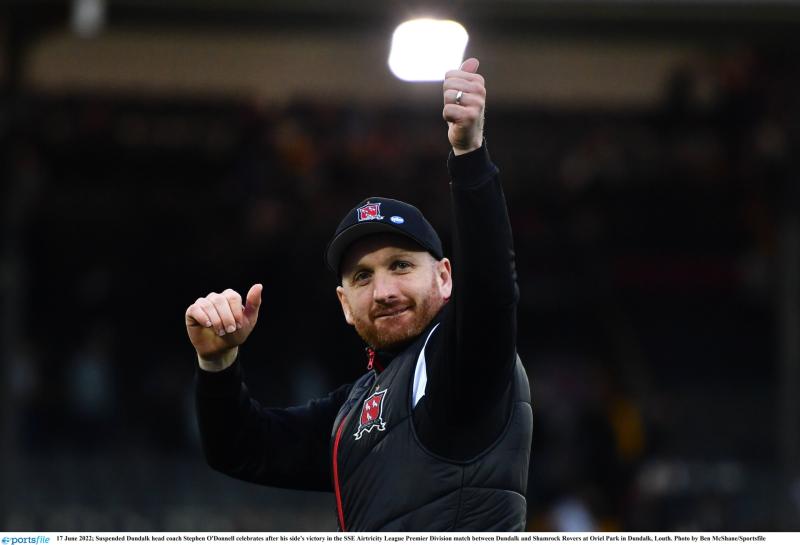 Stephen O’Donnell has once more refused to get drawn into a discussion about whether or not his Dundalk FC side are SSE Airtricity League title challengers, despite The Lilywhites recording a 1-0 win over defending champions Shamrock Rovers last Friday.

Having played one game less than the current table-toppers, Dundalk moved to within five points of the summit with 17 fixtures still remaining – one of which is another encounter with Rovers, scheduled to be played at Tallaght Stadium on August 19th.

The Dundalk head coach, serving a touchline ban following a sending off at Derry City last month, was forced to observe from the television gantry on top of the shed at Oriel.

“It’s not great, but these things happen,” he said. “Nothing really changes. You’re still sort of kicking every ball and that. I’m delighted with the win. I thought it was deserved.

“It was a tough first half. We controlled the game, but they had chances. Obviously, they had tried to identify balls over the top and tried to play off Mandroiu and Gaffney getting in behind.

“There was a couple of scary moments. They have good players, but I thought we controlled the game when either team had a decent spell in possession. I thought we were a little bit tentative in the first half. Second half, we were better and we created more. I thought it was a thoroughly deserved win.”

Playing what could be his last game at the Carrick Road venue, Stoke City loanee Lewis Macari provided a wonderful assist for Benson, whose superb finish proved decisive.

“We got into a few good positions out wide in the first half, but the deliveries weren’t great. Lewis switched the play and it was a great delivery into the perfect area.

“Robbie has done that too many times over his career for it to be luck. He just has a knack of affecting big games and big moments.”

With only two defeats, no team has lost fewer matches than Dundalk this season, while The Lilywhites, with eight wins and two draws, remain unbeaten in ten games at Oriel.

However, O’Donnell and his players are keeping their feet on the ground amidst any outside talk of a potential title challenge over the coming months, with the Dundalk boss reminding himself that his side produced just one win from their opening seven fixtures.

“There’s nothing different in regards me saying something about a title race in an interview or that. That’s all just talk. We were happy with a lot of things, the way we were training and that, when we were getting all those draws.

“Look, we’re doing really well. We’re on a very good run and that’s the bottom line, but if we take our foot off the pedal and start talking nonsense in interviews or take our eye off the ball, we won’t be anywhere near the top. That’s black and white.”

Dundalk hope to continue their amazing run of form and make it six wins on the bounce this coming Friday night when they face Shelbourne at Tolka Park (kick-off, 7.45pm).

Fourth from bottom, Shels have suffered consecutive defeats coming into this fixture, but held The Lilywhites to a 1-1 draw when the sides last met at Tolka back in March.

On that night, Patrick’s Hoban’s 100th league goal for Dundalk was cancelled out by a Sean Boyd penalty four minutes from time after he had been fouled by Nathan Shepperd.

Just over a month later at Oriel, John Martin was the hero with a late winner against Shels in a 2-1 win after Daniel Kelly and Shane Farrell had both scored at opposite ends.

“I think we have 17 games left, so it’s a mile out from the end of the season. It’s a good win against the defending league champions.

“We’re delighted with it. It keeps our good run going that we had before the break and we’re looking forward to what’s going to be a really tough game against Shelbourne next Friday now.”

Friday’s game between Dundalk and Shels is to be refereed by Robert Hennessy (Limerick) and can be watched live via the LOITV streaming platform for a price of €7.