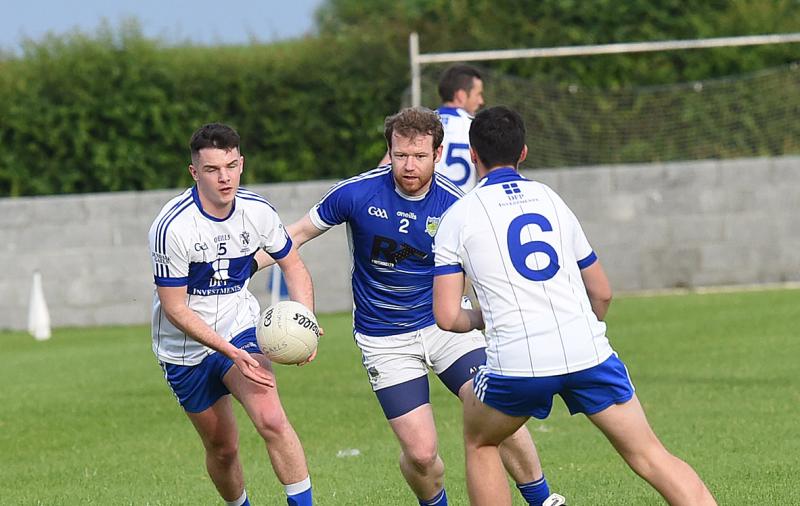 A steely second half display of defending allowed the Dundalk Gaels to win on the road against Roche on Friday night. The win further strengthens their grip at the top of Division Two.

In a tight game, three measly points from frees were all the visitors would allow Roche in the second half. With that security at the back, Mark Hanna and top scorer Dylan McKeown inspired the winners along with goal scorer Thomas O’Connell.

O’Connell’s first half strike came from the penalty spot and that made it 1-8 to 1-6 at the turn. Roche started the brighter with Caoimhín Reilly landing a brace before Kevin Callaghan put the hosts five ahead.

However, winning is a habit that the unbeaten Gaels cannot shake. Cathal O’Hanlon’s troops would shut down their opponents to claim their eighth win of the season.

St Kevins maintained their good run of form with a hard fought win in the Upper Marshes on Saturday evening.

In a very tight opening 15 minutes the sides were level at two points apiece, before the Young Irelands hit a purple patch and opened up a four point lead with Cian O’Donoghue, Dermot Mone and Peter McStravick among their scorers.

However, the Philipstown side responded and Lee Crosbie kicked two good points to cut the gap at the break, with the hosts leading by 0-7 to 0-4.

St Kevins opened the second half in flying form and points from Lee Crosbie (2), Evan Maher and TJ Doheny put the Kevins into the lead for the first time in the game.

Young Irelands levelled, but their cause wasn’t helped by the dismissal of Derek Maguire on 40 minutes. The Kevins then kicked on again with three excellent points from Doheny, Lee Crosbie and Karl Martin to give the Kevins a three-point lead. Young Irelands managed to get one back but Thomas McNamee’s side held out for another win.

Clan na Gael could not break down a defensive Hunterstown Rovers side on Sunday evening as the men in red leapfrogged the Dundalk side into third place in the Division Two table.

The win hinged on a James Rogers goal in the first half, it allowed Rovers to open up a slender lead in what was a tense and tight affair.

Ryan Burns returned to club action with four big points while Conall McKeever landed a brace for the visitors. At 1-3 to 0-5 by half time, it was a delicately poised score and with that, the hosts then shut up shop for the second half with Colm Donnelly’s ultra-organised side packing their defence.

Dean Burns came off the bench to pick off two sweet points while the Clans only found the range once in the second half.

Kilkerley Emmets turned the form book on its head as they recorded a much-needed victory over O Raghallaighs at home on Saturday night.

The Emmets went on a scoring spree with Tadhg McEnaney and Fionn Cumiskey doing most of the damage to help their side move further clear of trouble at the bottom of the table.

By half time McEnaney had six points on the board, a tally matched by Cumiskey as the hosts took a healthy 0-12 to 0-3 lead, with Ben Rogan, Ruari Moore and Ewan Sweeney replying.

The visitors finished the half on top with points from Moore, Kyle McElroy and Eoin Moore to cut the gap to 0-12 to 0-6 at the interval.

However, Kilkerley regained control after the break, via a Cumiskey free followed by efforts from Brian and Fintan Brady. The hosts continued to pile on the pressure and extended the gap with scores from McEnaney, Cumiskey and the Brady brothers.

Ruairi Moore registered the only reply for the O Raghallaighs during that blitz, before kicking the final two points of the game.

St Josephs gained a valuable two points in this bottom half of the table clash when they came through against the Oliver Plunketts by eight points on Saturday evening at Cluskey Park.

Despite playing into the wind, it was the Plunketts who had the better of the first 10 minutes with two early points. Their lead could have been greater except for a fine double penalty save from Jordan Mackin in the Joes goal on five minutes.

Following good work by Cian Sheridan it was Craig Doherty who fisted over the Joes first point on nine minutes. The sides traded points with Doherty pointing again from distance to leave the Oliver Plunketts leading by 0-4 to 0-2 on 21mins.

The Joes had the better of the scoring in the final 10mins of the half with three unanswered points from Conall McCaul, Oisin McGuinness and Oran McParland to lead by 0-5 to 0-4 at the break.

The game was decided in a six-minute spell in that third quarter. Craig Doherty picked his spot and hit the net on 36 minutes and two minutes later he added a second following a strong run by Conall McCaul.

Jack Barron for the Joes hit two points in the next three minutes to leave them leading by 2-7 to 0-4 on 42 minutes. The Oliver Plunketts rallied, adding four points, but the game was beyond them at that stage and late scores from Doherty and Conor Neary completed the win.