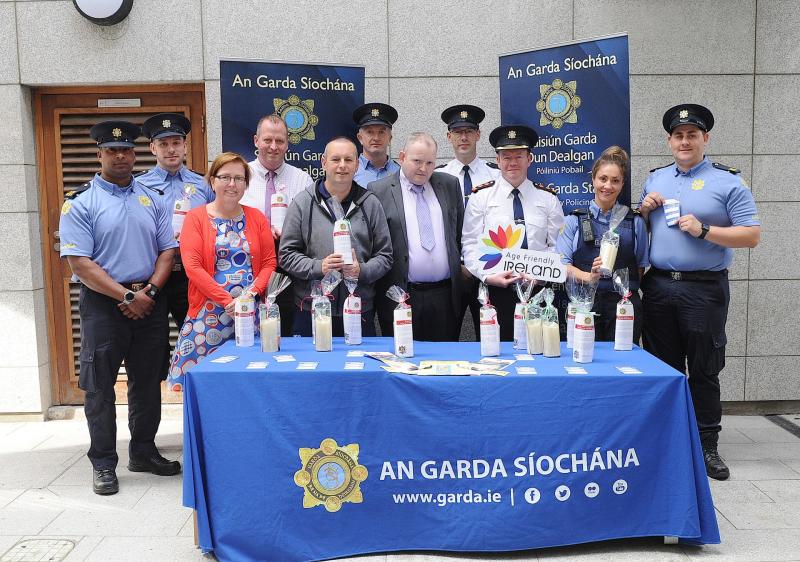 The packs will be made available to older people throughout the whole of Louth and include a fridge magnet upon which can be written the person's Eircode, next of kin and contact details of the nearest garda station.

Also included are leaflets with crime prevention advice and an LED candle provided by the local council.

The contents will help people in the community protect themselves, their home and belongings.

“Initially when we started this initiative we looked at the candle as a light at the end of the tunnel coming out of Covid, now coming into the winter months we’re looking more at [ a practical use].”

The Louth, Cavan and Monaghan Division is the first in the country to roll out the scheme and it is planned to be extended nationwide.

“We’ve got feedback already from the ones we have rolled out in Monaghan for example where an elderley person went to contact an ambulance, couldn’t remember her Eircode, and went to the fridge and got the Eircode and was able to get medical assistance.”

“The whole idea is to get boots on the ground, we want high visibility and engagement.

“This isn’t just for An Garda Siochana, this is also for the community, we’re a community based organisation so we’d encourage people to check on their neighbours and see if they’re ok and if there are any concerns to contact us.”

“Our community engagement teams will be going into homes with these packs which will increase our level of visibility and we would encourage all members of the public to come up and say hello to our community officers.

“If people are looking for a pack and want one, don’t be afraid to ring up the station and we’ll get one out to you,” he concluded.

Superintendent Charlie Armstrong detailed how local gardai had developed a positive relationship with elderley people over the last few years during covid and still offer assistance with prescriptions and groceries.

Crime Prevention officer for Louth John Heavey stressed it was important, given recent cases of bogus callers impersonating gardai particularly targeting the elderley, that people were made aware of the steps to take to ensure they don’t fall victim.

”There’s no law in this country that says you have to open your door, talk out a window [to the caller], hand out a card and ask them to fill out their details and get back to them when you’ve checked them out.”

Councillor Keelan praised the work of local gardai and said he hoped it would be one in a long line of worthwhile initiatives to help Louth become a more age friendly county.

Councillor Meenan commented: “Having an elderley parent myself I know how important things like this can be, it’s a fantastic initiative and it’s taught me some things about being more security conscious, I’d urge people from around the county to avail of it.”

Councillor Yore praised the inclusivity of the scheme:

“I think it’s a brilliant initiative and am delighted it’s not just for senior citizens but for vulnerable people that might not have the knowledge not to open the door. As parents of children with special needs know you’re always anxious about things like that happening when you’re not there. It’s great that we’re the first division in Ireland to roll out this initiative.”