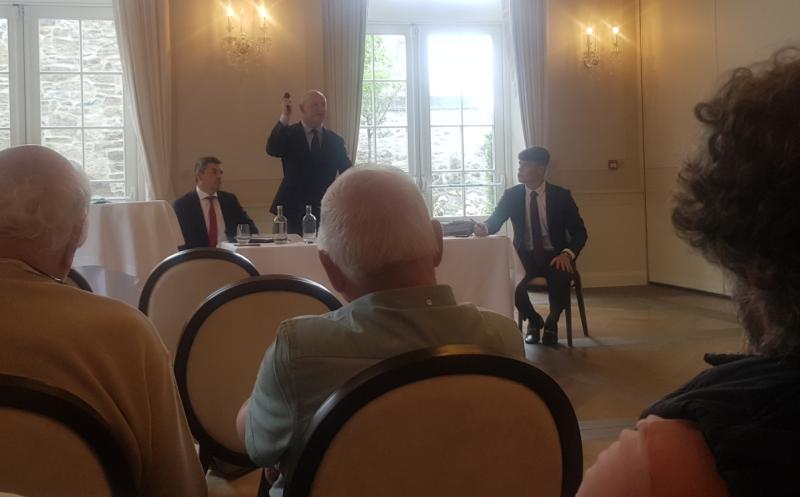 A local man bought the Deanery in Cashel for €1,020,000 at a public auction in the Cashel Palace Hotel on Wednesday last, far surpassing the Guide Price of €800,000.

Auctioneer John Fitzgerald, who also serves as the Deputy Mayor of Clonmel in his role as a Fine Gael Tipperary County Councillor, opened the bidding in the palatial surrounds of the Cashel Palace’s Ballroom.

Auctioneers Dougan Fitzgerald (DNG) Liam O’Grady had arranged the public auction on the instruction of the Representative Church Body, owners of the 4,050 sq ft Deanery, called ‘Maryville’, set amid 9.6 acres at the junction of Boherclough Street and Lower Gate street.

An audience of about 50 people attended, many drawn from Cashel’s Church of Ireland community.
Bidding started rising from about €600,000, through €10k and €20k increments, coming from five or six main bidders to €970,000, then €990,000, in an exciting flurry of bids and counter bids from all corners of the chandeliered room more used to hosting Weddings.

“Will I make it a million,” Mr Fitzgerald asked his audience with Gavel in hand. “The Deanery is unique. It’s tantalisingly close to one million. Today is the day, don’t be sorry, it won’t be here tomorrow.”

Mr Fitzgerald called on bidders, a third and final time, before closing the auction with a swing of the gavel in favour of a local Cashel based property owner who bid €1,020,000, and congratulated him on his purchase.

It’s understood that the new owner is from the Fethard Road near Cashel.

“It’s a nice investment,” said the proud new owner, who preferred to remain anonymous, following the sale. “We’re local anyway, we know everyone and everyone knows us.”

Mr Fitzgerald said he was “very pleased with the sale.”

“We exceeded the reserve we had set for it. We’re delighted to be selling for the Representative Church Body. They got a great price. It’s a good ending. I think there were six bidders in the room and that’s very good at a public auction”.

“This property was a special one” and the Church of Ireland is “thrilled” that the property was bought by “good solid people and the local Church Vestry is delighted with it.”

There was huge interest in the weeks and months leading up to the public auction, on June 29, particularly in May and June, added Mr Fitzgerald.

The Church of Ireland originally used the Cashel Palace as its Deanery, before moving to Maryville in the 1960s. It was fitting that on the day, the same House was used to sell this most prized of Church of Ireland assets in the heart of Old Cashel.

“This is another change. They are delighted that a local person got it,” added Mr Fitzgerald.