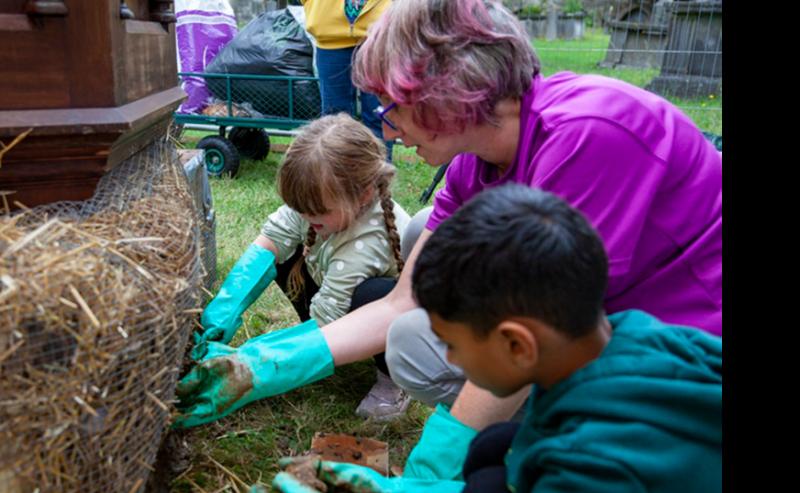 Clonmel Applefest’s two community engagement projects have taken on a life of their own since public workshops started.
One such series is for the harvest procession which started at the Showground Shopping centre.

Facilitated by mother and daughter team of Grainne and Elke Wilson, the fashion designer and craft teacher were hard at work helping parents, children and teenagers to make headdress and elaborate costumes in preparation for the much-anticipated harvest procession which will take place on Saturday, September 24 at 7pm.

This event is the culmination of a full day of community activities taking place at Suir Island car park.
While this is an unusual and unfamiliar venue, festival organisers opted for the car park as it has lots of space and will be ideal for the final fire spectacular performed by Rogú which will take place at the end of the harvest procession.
Parents are advised that this is not a suitable event for children under 8. The procession will feature many community and guest performers who will come together with members of the public to celebrate the end of the harvest season and the start of the dark winter season.

Meanwhile, over at Old St Mary’s, another unusual project is taking place, with artist Brigid Teehan working with children from various communities and school children from the Sisters of Charity and Parochial School to shape an unusual creature made of unorthodox materials.

PUBLIC SCULPTURE
As an artist, Brigid is aware of how fine art has a language and a long history that operates in a somewhat privileged space.
By engaging with children and families, she feels she can open a creative door and invite in all who are curious to take those steps into the unknown. This may be an uncomfortable space to be in, but after a series of workshops together, the co-creation of an ambitious public sculpture is finally taking shape.

One area that has been explored was the traditional building material known as cob, which is a mixture of subsoil, sand, straw and water.

This sculptural material is also used to make houses and there are a growing number of cob houses being built again in Ireland and beyond. The children have been making cob bricks, using moulds and other supports to create shapes.
Brigid is also very mindful of the materials that she uses and how they impact on our environment. Because of this, she is interested in found objects and recycling materials in new ways.

WOODEN PULPIT
So when a beautiful old wooden pulpit was offered for the project by the church’s caretaker, the imaginative ideas between the artist and the children took off in new directions.
Could it be a castle? A play house? A chariot? Or a combination of many things. It was important to step up into the pulpit and experience it. For some it was a performance space for singing/music, others just felt joyful to have such a different outlook from above.

After some time reflecting on its many incarnations, it emerged that the pulpit could be on the back of a flying dragon/bird-like creature that is emerging from the ground.
After creating a shape around the pulpit the work is now focused on making wings and using cob and other materials to form the body.

The four gothic-arched recesses on the wooden pulpit will frame colourful drawings made by pupils from Sisters of Charity and St Mary’s Parochial School, based on their favourite games and play activities.
The official launch of the children-friendly sculpture will take place on Friday, September 23 which is part of Culture Night at 5pm.