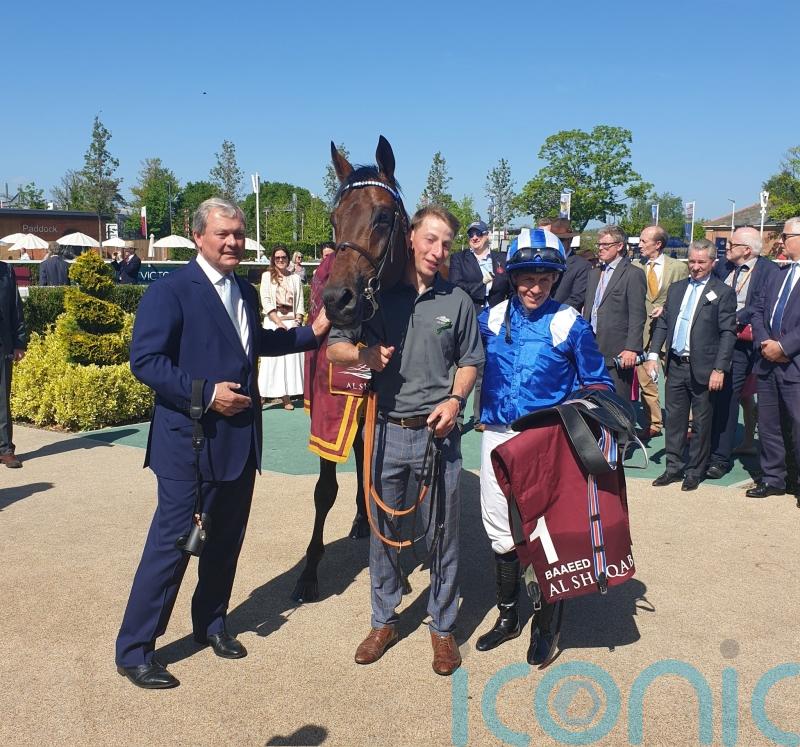 There were to be no bubbles burst here on Saturday. Not on this lush, green strip of Berkshire turf.

The Lockinge Stakes in particular, is invariably a pebble on the sea bed, rather than some unnavigable rock that casts aspirations adrift.

This race is a welcoming embrace for smart horses with big seasons ahead, the first stepping stone to a string of top-class targets.

Nothing could dampen the spirits. The sun shone. The ice cream van did a roaring trade. Summer had arrived. And so had Baaeed.

Some fancied horses have been beaten in this race, of course. Yet you had to go back a couple of decades to find the last odds-on shot beaten in the race.

William Haggas is not one to take chances. He is softly-spoken, considered. A measured pragmatist who plots a path without flim or flam. Though a genial man, he does not take fools gladly. One knows where one stands with him. As it should be. 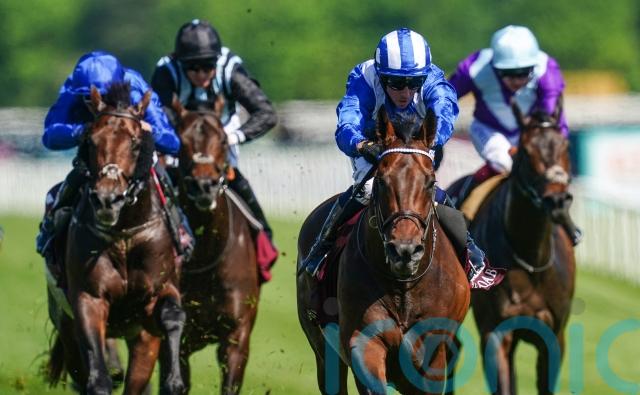 This was “a good starting point” for Baaeed he said succinctly, the exciting prospect in his care who came into this unbeaten in six races, justifying cramped odds on four occasions.

His last run, back in October, saw him down last year’s Lockinge winner Palace Pier in the Queen Elizabeth II Stakes at Ascot, his second successive Group One victory in a career that did not start until June.

Of course there were some questions to answer. The four-year-old’s rivals included dual Group One-winning filly Alcohol Free, who had blown the cobwebs off at Sandown in the bet365 Mile, and dual Group Two winner Real World, who was hoping to revive the fortunes of Saeed bin Suroor.

There was Classic-winning miler Mother Earth. The tough Chindit had won at the second level, New Mandate had taken a Royal Lodge.

Twenty minutes before his ride, his big-race jockey, Jim Crowley, had been dragged out of the weighing room to collect his prize for winning the London Gold Cup with Israr, for the same Shadwell Stud owners. 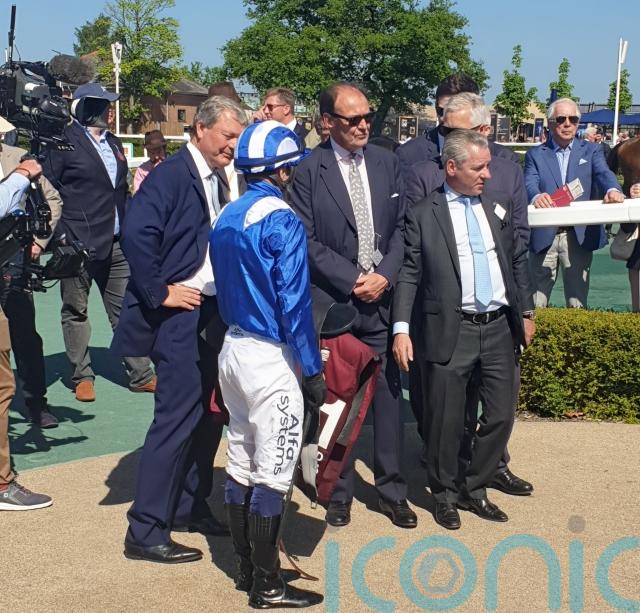 Angus Gold, racing manager to the owners, was also very relaxed. “Pressure? That is for the trainer,” he laughed. “It is lovely to have horses good enough to run in races like this on days like this.

“He is a pretty straightforward horse, and it is all up to Jim.”

And with no definitive pace-setter on Baaeed’s first run for six months, of course there were doubts.

There was no dipping the toe in. This was a dive into the deep end from the top board.

Yet the son of Sea The Stars made the required splash.

He cruised through the race, barely turning a hair, with Crowley not needing to ask any serious questions at any stage.

Haggas admitted his nerves beforehand. That owed much to his daughter about to give birth in Dubai, “which is far more important” he said.

“I had a few nerves. I’m not really like that, but it is all you fellas building him up and putting us under pressure,” Haggas laughed, with palpable relief.

With such a horse, an unbeaten one at that, comparisons with former stars are acceptable at this stage. Reminded that he had quipped that he had uttered the words “Nijinsky and Arazi” when he ran last year, he quickly backtracked.

“Nijinsky won on the bridle! I said he works like Nijinsky at home, but that is just an expression!”

Now the hype train will really gather speed, although the destination is set to be at stud at the end of the season. He is too valuable a commodity to risk in the long term.

“There is not really anything we are gunning for this season. We just want him to win the races he runs in,” said Haggas.

“I would think if he continues to win, I would say it is very unlikely he would stay in training next season.”

He added: “I don’t know if he is the best horse I’ve trained. Most horses who have a good turn of foot are good and he has got a nice turn of foot.

“I think he is a good horse. He has a great temperament. We saddled him in the stables and he was quite full of himself, but was brilliant when he got back down here (in the parade ring).”

Though connections were confident, Haggas, who has the huge responsibility of getting him in prime shape, was anxious.

“I was concerned by the lack of pace in the race, but deliberately didn’t talk to Jim, because he doesn’t want a trainer like me befuddling his brain.

“Jim knows exactly what he is doing. He is a very experienced rider and he knows the horse as well as me and he must do what he feels is right.”

The former champion jockey never had cause to worry. He tracked the leaders, made smooth headway to two furlongs out and led at the furlong marker before drawing clear.

“He’s smart. He doesn’t appear to have any weaknesses and is an absolute pleasure to ride,” said Crowley.

“He is so straightforward and is everything you want in a racehorse. He has every attribute you look for and you can put him anywhere in a race. He has gears, relaxes, stays the mile well and has a great turn of foot.

“I think he’ll get further and the Juddmonte (International) might be on the cards, I think.”

The Queen Anne – for which he was cut to 1-2 favourite – is virtually there for the taking at the Royal meeting. But after that, why would you try a crack miler over 10 furlongs?

Haggas simply explained: “It would be a shame not to try a mile and two (furlongs). Everyone was saying Frankel should have stayed at a mile and arguably he was at his most imperious when he ran in the Juddmonte on that unforgettable day.

“We will try it at some stage, but let’s just keep him in one piece and we’ll have some fun.”

He added: “Of course there were a couple of sleepless nights. I just hoped he would win. You can find lots of negatives.

“He was a little bit sweaty and coltish in the stables, but once he came down here, he thought ‘this is what I’m here for’.

“He is a dream at home. He is fantastic and hopefully there is lots more to look forward to.”

This is, of course, a team game with Haggas and his wife Maureen at the head of the operation.

For Baaeed’s groom, Ricky Hall, it was a red-letter afternoon. He looks after the colt at home and rides him in work. His smile said plenty, his words merely embellishing his joy.

“You could not ask for a nicer horse to be around,” said Hall. “I ride him every day and look after him, and he is just an absolute pleasure. It is a real team effort, though. Everyone does more than their bit.”

Was he similarly nervous? “I went for a run at four o’clock this morning and even though I forgot my running gear!” he said.

“I have ridden him all the way through. He is just gorgeous. So far this year I think he has got a bit stronger, but he loves everything and he is a happy, happy horse and we will try to keep him that way for as long as possible.”

For Crowley this was a routine afternoon. Turn up, ride three winners and pick up a Group One prize, put that thought of a run at the jockeys’ title a smidgen nearer to the forefront of his mind.

“It was a great day,” he said. “I was a bit unlucky in the first race and thought, ‘Oh no, I hope it is not going to be one of those days’, and obviously it is nice to get a treble.

“I am having a few winners with less horses and so hopefully I can pick up some nice outside rides.

“It has been good day – a treble highlighted by Baaeed, but the horse who won the London Gold Cup was great as well. I’ll make the most of it.”

And for now, for a brief, fleeting, enthralling summer, we should also make the most of Baaeed. This is just the start.