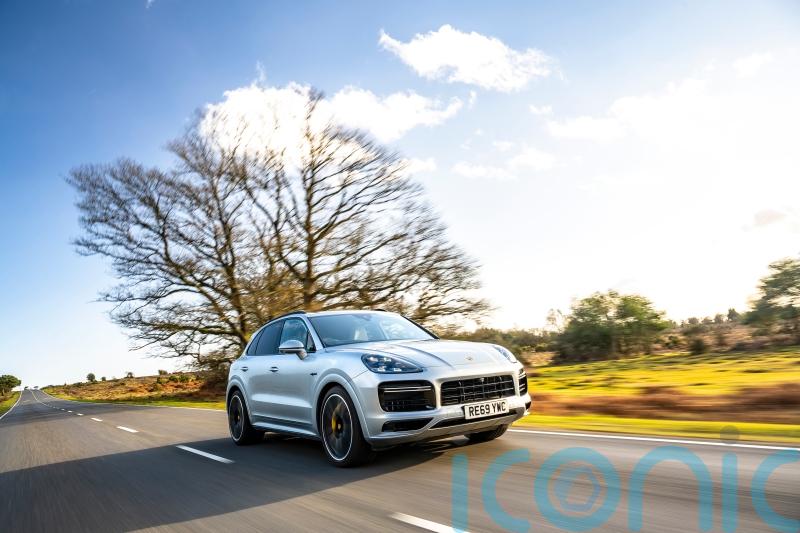 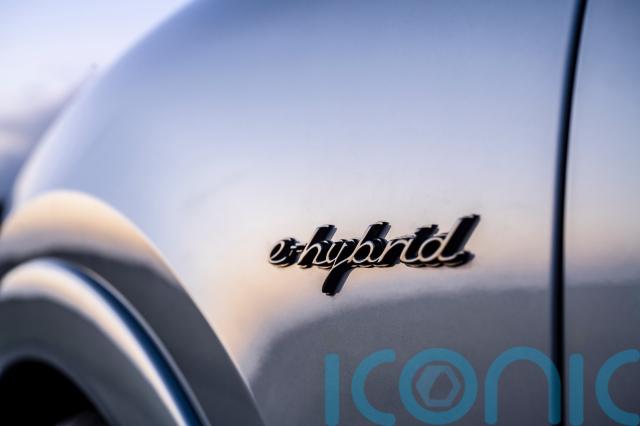 If you’re the sort of person that thinks electrification will be the death of performance cars, Porsche would like a word. It was one of the first premium brands to embrace hybrid powertrains in some (albeit not all) of its cars, and since then it’s really pushed the envelope with the technology.

This generation of Cayenne has been around since 2018, and in typical Porsche fashion, it’s ageing very gracefully. The casual observer would be hard-pressed to spot the differences between it and the previous generation car – arguably no bad thing if you don’t want your Cayenne to look out of date in a few years time.

The Turbo S E-Hybrid gets a few external bits and pieces to separate it from non-hybrid models – most obviously the lime green brake calipers and ‘e-hybrid’ badging – and of course the giveaway of an extra flap to hide the charging port.

Over the standard E-Hybrid, meanwhile, it inherits the active spoiler of the regular Turbo S model: a quite subtle roof-level affair on the full-size Cayenne, but more obvious on the Coupe version, where it seemingly appears from nowhere just below the rear window. 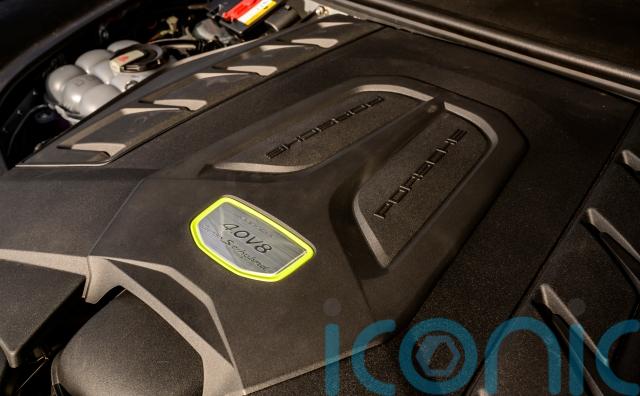 As you might expect from the name, you get an amalgamation of the regular E-Hybrid powertrain, but paired with the more powerful engine from the Cayenne Turbo. That means a 4.0-litre, twin-turbocharged V8 petrol, an eight-speed automatic gearbox, and an electric motor sandwiched somewhere in between.

Total power output stands at 670bhp: the petrol engine making up the lion’s share of that, and the electric motor bringing 134bhp. It may not sound like it’s contributing much, but the electric motor’s instantaneous torque helps launch the Cayenne from 0-60 in as little as 3.6 seconds: mind-bending figures for a two-and-a-half-tonne SUV.

It’s not all about performance, of course – there’s the added benefit of zero emissions driving around town, the reasonably sized (for a plug-in-hybrid) 14kWh battery giving a range of around 25 miles and an impressive top speed of 84mph.

The real star of the show is that 4.0-litre petrol V8, though. Shared with many other cars in the VW Group, it suits the Cayenne down to the ground: brutish yet refined, with a staggering 770Nm of torque on tap, you’re left in doubt that the Turbo S means business. 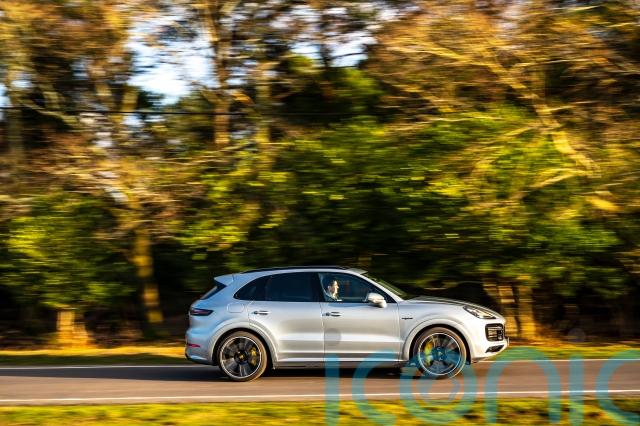 Porsche has some history in making SUVs that handle far better than they have any right to, so you’d expect this (nearly) top-rung Cayenne to be something special. To an extent, it is.

Acceleration is, as the figures would suggest, merciless: the 4.0-litre V8 alone is mad enough, but with the electric motor stepping in to smooth over the gaps, the net result is a monstrous – if a little clinical – reaction when you step on the accelerator.

Cliched as it sounds, the Cayenne feels like a proper Porsche too – despite its various shared underpinnings with other Audi and VW models. Steering is classically Porsche: accurate and with a perfect, linear weight – neither overly assisted or given artificial heft.

It’s also typically Porsche in terms of ride and handling: a real Goldilocks’ porridge mix of just the right amount of body control and comfort. The real surprise is the latter: in less angry driving modes, the Cayenne has an unexpectedly (and favourably) supple ride, perhaps a nod to the E-Hybrid’s likely use in an urban environment.

As well as the ride, said drive modes have a rather dramatic effect on the Cayenne’s drivetrain too – and not always for the better. In default ‘Hybrid Auto’ mode, a vast gulf between the petrol and electric motors suddenly becomes apparent: the gearbox steadfastly refusing to wake up the behemoth V8 unless it feels like it really has to. 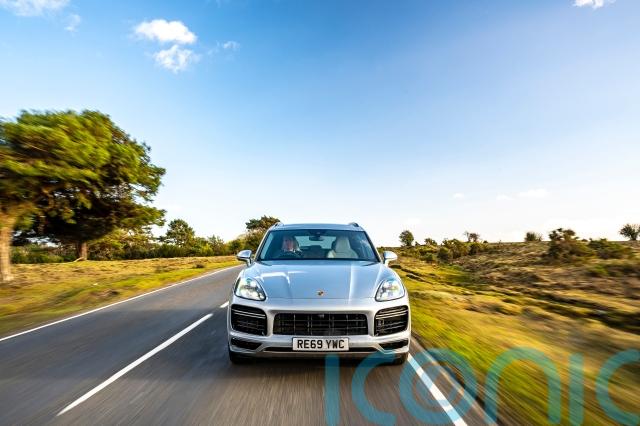 A bit like a Porsche Cayenne, really. As we’ve mentioned, there are some tell-tale lime green detailing over non-hybrid models, but beyond that the Turbo S E-Hybrid is relatively subtle for a 670bhp super SUV. There’s no bodykit to speak of and, to the casual observer, not much to separate this particular model from even a base-spec Cayenne V6.

You do get relatively large 21-inch alloys, mind– owing to the enormous brake discs, that’s the minimum size you’ll be able to specify. The only other slight giveaways are a slightly tweaked front end and body-coloured lower trim – items shared with the GTS and Turbo. 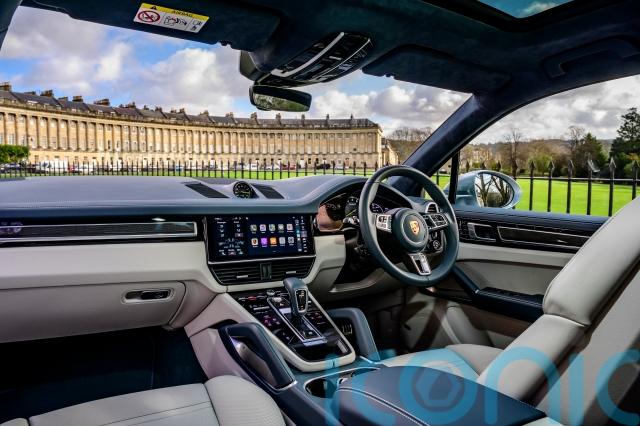 Porsche’s interiors have gone a bit Grand Designs lately, and the Cayenne is no exception. The ambience is somewhere in between a Swiss airport and a posh German kitchen: restrained design, lashings of shiny metal here and there, and – if you opt for lighter-coloured leather – an airy feel.

As usual, there’s no faulting the build quality either: everything you touch has a solid, well-screwed-together feel which – if previous models are anything to go by – should age gracefully too.

We’re less keen on Porsche’s current fetish for touch-sensitive buttons, in this case awkwardly strewn across the centre console around the gear selector. They’re awkward to use, requiring you to physically turn your head downwards to see what you’re doing, and are encased within an ever-so-shiny piano black finish that quickly collects dust and fingerprints.

There’s lots of space inside too, if not as much as in less sporty rivals like the full-size Range Rover or Audi Q7. Four adults can travel in comfort, five at a pinch, and while there’s no seven-seat option, the boot space is respectable 645 litres. 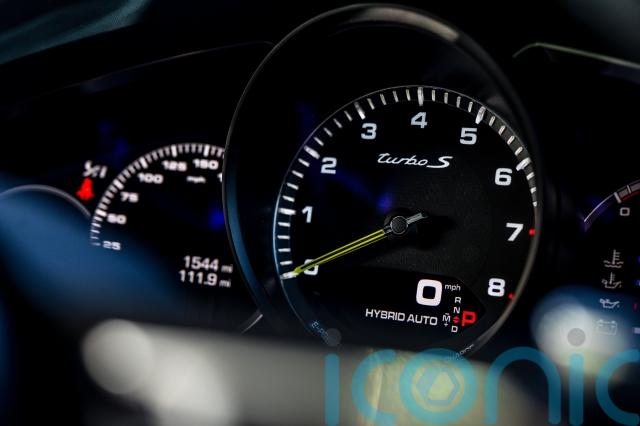 Vast. We’ve not got the space to list everything available on the Porsche options list, but there’s a comprehensive list of things as standard: LED headlights, rear view camera, 12-way electric seats, heated leather and so on.

Infotainment is handled by a 12.3-inch, full HD touch screen and – unlike some rivals – CarPlay and Android Auto is included as standard. A Bose Surround Sound system is also bundled in, though there’s the option to upgrade to an even posher Burmester system for £3,200.

There are plenty of customisation options – eight different shades of leather; choices of wood, carbon fibre or aluminium inlays on the dashboard and doors; and externally, 14 different choices of alloy wheel. Massage seats, rear entertainment and even night vision are possible if you’ve got the cash.

The Turbo S E-Hybrid is a bit of an odd one. On the one hand, it’s a real showcase of what Porsche can do with its engineering nouse and a relatively simple hybrid powertrain – namely, make the monstrous Cayenne Turbo just that little bit faster, but at the same time easier to live with.

In principle, the concept of the Turbo S E-Hybrid isn’t a bad one: all the performance (and more) of the Turbo, but with the possibility to pop to the shops without setting fire to your wallet. For many people that will be enough of a reason to buy one, but for us, the Turbo S E-Hybrid feels like an awkward mishmash of technologies, and an expensive one at that.

If you’re after thrills, the regular Cayenne Turbo is a better bet – and £20,000 cheaper. If a Cayenne with a conscience is what you need, mind, a regular E-Hybrid offers most of the thrills for a staggering £60,000 saving – money you could instead spend on say, a 718 Cayman or Boxster…