Hundreds of young people march through Edinburgh in climate protest 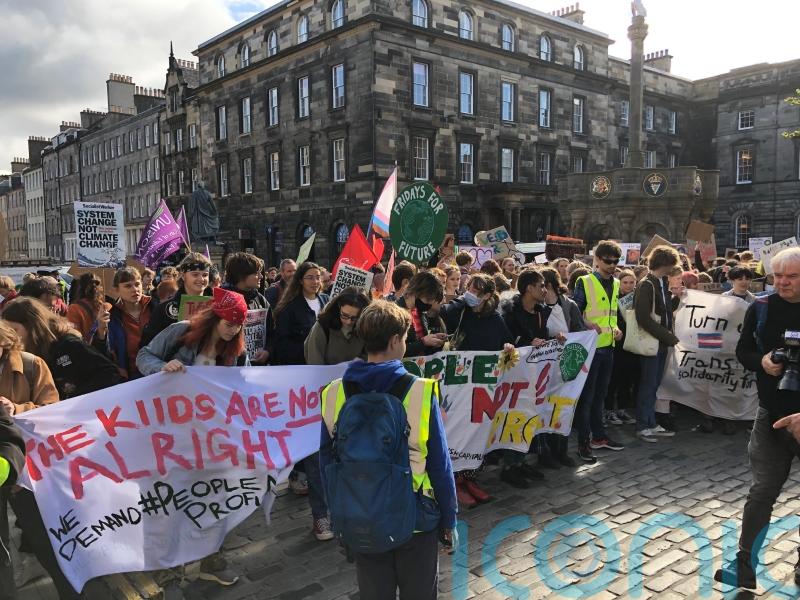 Hundreds of young climate activists have marched through Edinburgh in the first school strike demonstration since the summer.

The Fridays for Future movement inspired by Greta Thunberg held a climate march through the city, with some holding signs saying “the kids are not alright”.

After a rally outside the City Chambers on the Royal Mile, the protesters marched down the Mound and onto Waverley Bridge.

Traffic was stopped by the police as the march continued onto Princes Street before heading down Regent Road.

The march finished at the Scottish Parliament at Holyrood, where speeches were heard.

Demonstrators said politicians had failed to take action on the climate crisis since the Cop26 summit nearly a year ago.

They also hit out at the UK Government’s plans for more fossil fuel exploration in the North Sea and the end of the fracking ban in England.

Niamh Gill, 16, from Livingston, West Lothian, said: “We’re not alright with what the government is doing in not taking enough climate action.

“We need speed, we need a just and fair transition into renewables from fossil fuels, we need lots of other things.

“We’re annoyed that the Government seems to think that it’s our responsibility and it’s not theirs.”

Bessie Russell, 16, from Glasgow, said: “We’ve been doing this for years and we haven’t seen change.

“The kids are here to demand justice.”

She added: “After Cop it’s been quite difficult because so many promises were made and none of them were kept.

“So we’re just trying to keep the movement going, keep the pace.”

Cory MacCormack, 19, of the campaign group Turn Up For Trans Health, also said there had been a lack of action since the summit.

He said: “It doesn’t feel like anything gets done. It just seems like a bunch of politicians get to hand out and pretend that they’re fine.

“But I haven’t seen substantial changes and the Tory Government has literally done nothing.”

A Police Scotland spokeswoman said: “Police are aware of a protest and march in the High Street area of Edinburgh on Friday September 23.

“No arrests were made and all involved have now left the location.”