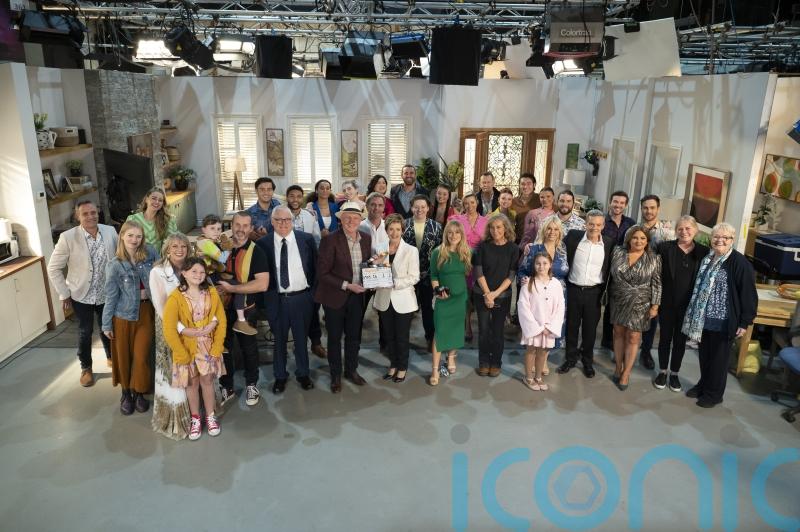 Neighbours star Alan Fletcher said the last day of filming the long-running Australian soap was “very, very sad” but also an “enormous amount of fun” as he reunited with past cast members.

The actor has played Karl Kennedy for 28 years on the soap, which has followed the lives of those living and working in the fictional Melbourne suburb of Erinsborough since 1985.

On Friday, cast members past and present reunited to film the final episode of the Aussie soap, and came together to sing a special rendition of the theme tune.

Speaking on BBC Breakfast on Saturday, Fletcher, 65, said: “Yesterday was bittersweet, it was quite a tough day it’s fair to say.

“It was a very, very sad day but celebratory as well. We were filming one of the very, very last scenes and we were surrounded by so many past cast members so it was actually an enormous amount of fun but of course sad that it was the last scene.”

The final episode, due to broadcast on August 1, will see fan favourites from throughout the years return to the cul-de-sac community of Ramsay Street to bid the soap farewell.

Kylie Minogue and Jason Donovan, who starred as power couple Charlene Mitchell and Scott Robinson in the 1980s, were previously announced to have returned for the show’s finale.

Fletcher said: “Sometimes people can be away for many years, come back and it was like it was yesterday.

“Bumping into Peter O’Brien for instance, who I personally had not seen for goodness knows how many years and suddenly we were back where we were all those years ago.

“It was just wonderful to see Paul Keane back too, so it’s an absolute joy to have people come back. Because it is a family, it is like your second cousins have come home after 10 years of being overseas.

“I can tell you that almost any person who was available who was approached were magnanimous enough to say ‘yes I would love to be involved’, and that is the depth of affection that people have for the show and recognition of just how much the show has done for them no matter how big they have become as stars, and that’s absolutely brilliant.”

The actor also revealed that technology meant “people who couldn’t physically be with us have ways of returning.”

Memento star Guy Pearce, who started his career playing Mike Young in the Australian soap, confirmed he had reprised his role after sharing photos reuniting with the cast and crew in recent days.

Joining them were O’Brien, who appeared in the show’s first episode as Shane Ramsay, Ian Smith who played Harold Bishop, Mark Little who played Joe Mangel, and Keane who played Des Clarke.

Among those returning from the 2000s era were Chris Milligan who played Kyle Canning, Morgan Baker as Callum Rebecchi, Natalie Bassingthwaighte who played Izzy Hoyland, and James Mason as Chris Pappas.

Olympia Valance, who starred as Paige Smith in the latest era of the show, is also back, alongside Jodi Anasta as Elly Conway, Zoe Cramond who played Amy Williams, and Kate Kendall as Lauren Turner.