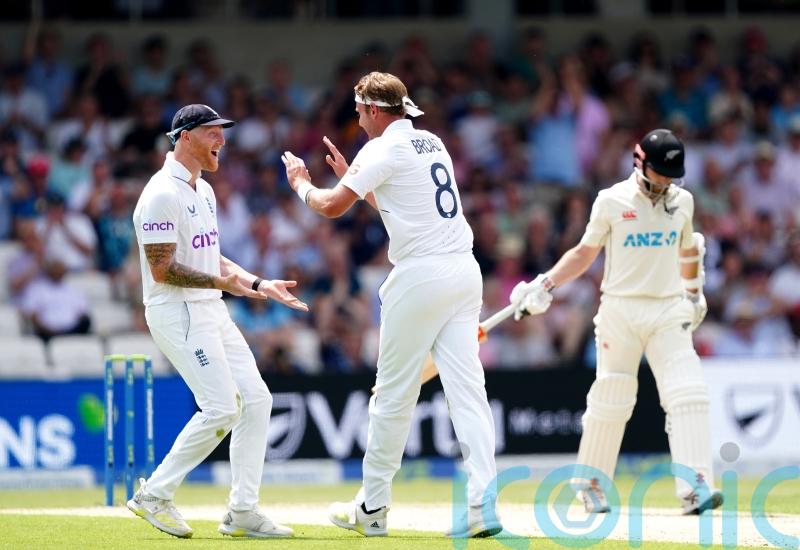 Stuart Broad’s double strike and a freak dismissal on the stroke of tea put England in a strong position on day one of the Headingley Test, with New Zealand struggling on 123 for five.

In the middle of a busy week for Broad, who announced on the eve of the match that he is expecting his first child with fiancee Mollie King and celebrates his 36th birthday on day two, it was business as usual for the veteran seamer who took two top-order scalps.

The Kiwis asked England to field first in serene batting conditions, but lost their first wicket to Broad before a run had been scored and never quite got their noses back in front.

Broad followed his early dismissal of Tom Latham with the key scalp of returning captain Kane Williamson in the run-up to lunch and might have added to his haul had a couple of inside edges been a little closer to a diving Ben Foakes.

Jack Leach also struck with his first ball of the morning session and debutant Jamie Overton, standing in for the injured James Anderson, opened his international account to ensure another breakthrough in the afternoon.

A partnership of 40 had begun to level things out until Henry Nicholls was the victim of outrageous ill-fortune, hammering a lofted drive off Leach only for the ball to ricochet off the middle of non-striker Daryl Mitchell’s bat and into the hands of mid-off.

It was an unexpected, unearned, boost but one that left the Kiwis with plenty of hard work to post a competitive score in good batting conditions.

The old adage at Headingley is to look up, not down, when deciding what to do at the toss, but this time both views offered encouragement to bat. With cloudless, sunny skies overhead and barely a hint of grass underfoot, Williamson did not need to think twice.

But, with Anderson absent, Broad’s habit of embracing the spotlight reared its head as the final ball of his first over caught Latham in two minds and sailed to Joe Root at slip via an indecisive edge. 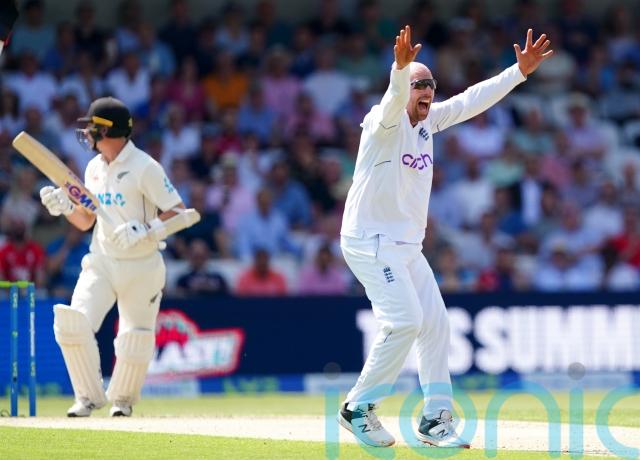 New Zealand could still have brushed that loss aside, particularly when Williamson’s inside-edge evaded Foakes and first spells from Matthew Potts and Overton came to nothing.

But Ben Stokes’ decision to take an early look at Leach, after just 12 overs, paid off as his loosener straightened up off the pitch and hit Will Young clean in front of middle.

Williamson, still looking for the innings that will shake off his indifferent run of form, reached 31 and seemed set for plenty more when the returning Broad conjured a subtle leg-cutter that clipped the edge and confirmed the session as England’s. 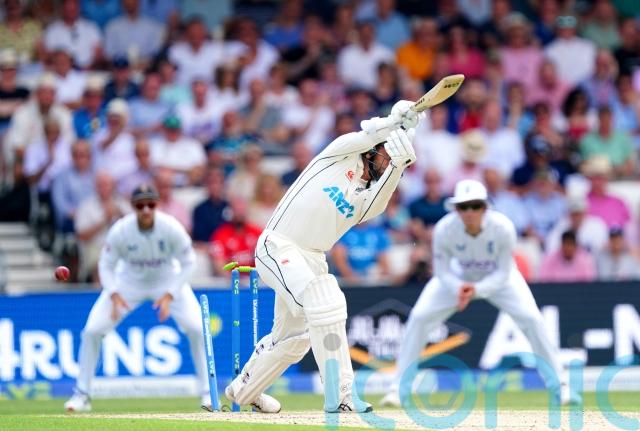 From 65 for three at lunch New Zealand lost the dangerous Devon Conway for 26, who became Overton’s maiden England wicket when he dragged onto his stumps with a loose drive away from his body. The Surrey bowler had showed glimpses of pace and promise, landing an 88mph bouncer in his first spell and finding some swing off a fuller length.

Had Mitchell followed for just eight, pinned in front of the stumps by a full, swinging delivery from Potts, New Zealand would have been fading badly at 97 for five. But neither umpire Marais Erasmus nor Stokes were sufficiently persuaded by the bowler’s impassioned appeal.

With no DRS taken, Mitchell was safe but replays showed the ball taking middle and leg stump.

England did get a fifth with their moment of pure luck, however, Nicholls paying the price for the cleanest shot he hit in a sketchy innings and Mitchell inadvertently providing the assist in his partner’s downfall.