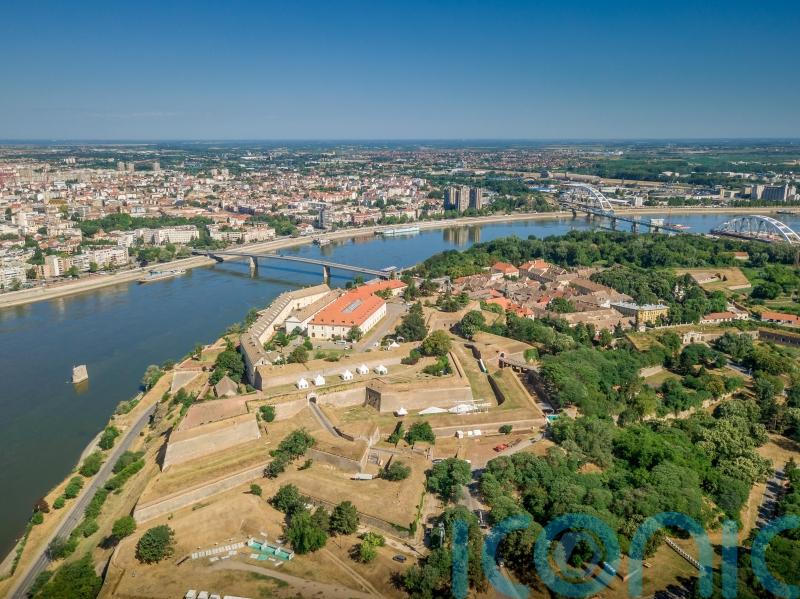 Pinned to the wall of Studio M gallery, a collection of human hearts pulses with metronomic precision. Disturbingly realistic, the artificial aortas belong to an exhibition exploring Time and Universe, where bees dance around darkened rooms, analogue phones ring with messages from beyond, and mirrors reflect a world that exists in our sleep.

“Dreaming is the only time no clock can measure,” whispers one of the gallery curators, cryptically. “We can spend our entire lives dreaming.”

The show, which runs until September, is part of a creative programme of events organised in honour of Novi Sad’s Capital of Culture status for 2022 (delayed from last year due to the pandemic). But the notion of nurturing hope for a better tomorrow is as old as the 17th century foundations of Serbia’s second city.

Located at a geographical crossroads of mainland Europe, Novi Sad has frequently found itself on the frontline between east and west. It was even conceived as a defensive city; built on top of a former monastery, the Petrovaradin Fortress protected the Austro-Hungarian empire from Ottoman attack.

It was flattened in the world wars and bombed during the 1999 NATO campaign at the height of the Balkan crisis and fragmentation of Yugoslavia, but each time, Novi Sad has risen like a phoenix from the ashes.

Walking through the tiny city, which can easily be explored in a weekend, I stumble into upbeat bars and lively cafes tucked into shadowy passageways. Decaying spaces have been reinvigorated with new life: a former silk factory has been converted into a cultural centre, while artist workshops occupy the grounds of the demilitarised fortress.

Although Serbia’s government has taken a controversially silent stance on the war in Ukraine, in Novi Sad, the younger generation is focussed on building bridges – both physically and metaphorically. Immortalised by a gallery of posters along the banks of the Danube River, structures past and present have always been cherished as links to an outside world.


Every July, electronic music festival Exit is held in the Petrovaradin Fortress, uniting cultures regardless of political borders. Early one morning, when I climb to the ramparts – one of the only hills in the pancake-flat city – everyone is still sleeping. From my viewpoint, I scan a skyline shared by onion-domed orthodox churches, cathedral spires and a synagogue – testimony to the tolerance shared by Novi Sad’s citizens.

Recent events may have stirred difficult memories from the past, but they are also a reminder of paths to be followed in the future. The European Capital of Culture programme is often derided for being highfalutin and low performing. But this time round, a tiny but strategic Eastern European city has a lot to talk about.

Explore the subterranean tunnels of the Petrovaradin Fortress


More people died in the 88-year building of this 17th century complex than did in battle; its formidable design meant it was only attacked on one occasion. It’s free to explore the ramparts, but touring the 16km of corridors weaving below the city requires a guide (only 1km is accessible to the public). Tours in English require a minimum of 10 tickets (although at £2 each, it’s possible to pay the lot yourself). Visit the City Museum, part of the fortress, for information on timings.

Wine and dine at Project 72


As a proud city of migrants, Novi Sad’s cuisine is a blend of multiple cultures. Typical dishes from Vojvodina (the local region) include poppy seeds on pasta or dumplings, and red pepper tapenade ajvar. Try the latter as an ice cream at innovative restaurant Project 72 (Kosovska 15). A two-course meal with excellent wines from nearby Fruska Gora costs around £25.


A tumultuous past has taught Novi Sad-ers to live for the moment, making this one of the most fun places to party in Europe. Bars are small, hidden and always packed – and smoking is still legal indoors, so be prepared for an even more cloudy, clandestine experience.

There are no distinct cool districts – people stroll from one bar to the next – but Graffiti (Kosovska 21A) is worth seeking out. Listen to jazz while admiring the quirky décor, including a glass cabinet of butterflies and a pair of stag antlers above the bar.

Stay in the thick of the action


Opened in February this year, Corso Rooms is both brilliantly located and excellent value. Bright and modern with Ikea-style furnishings, rooms cost from around £38 per night, with breakfast served in the bar downstairs. Friendly manager Andrijana can share tips on the city. Available through booking.com.

Wizz Air (wizzair.com) operate flights from Luton London airport to Belgrade from £37 one way. Flights leave at unsociable hours so be prepared to book an airport hotel. The Ibis London Luton Airport (all.accor.com) has rooms from £43 per night. A taxi from Belgrade to Novi Sad costs around £50 each way and takes an hour; a 90-minute bus costs £7 each way.

For details of the Capital of Culture events, visit novisad2022.rs/en/what-is-ecoc