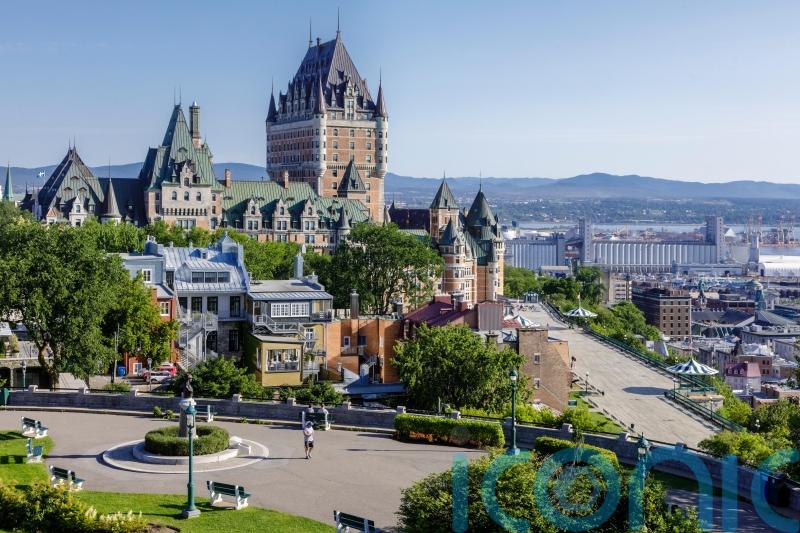 “This is the first time you’ve been to Canada?” exclaims my guide, Émilie, with surprise. “You picked the best place to start.”

As I walk around Quebec’s Le Grand Marche, the modern food market serving everything from maple flavoured beers to traditional butter puddings, it’s difficult to disagree. A wide range of local producers serve their sweet and savoury delicacies here. Tucking into poutine (a traditional chips and gravy dish), I feel like ‘I’ve arrived’.

We’re refuelling after a scenic ride along a cycle path following the Saint Charles River, where black squirrels scamper in and out of sight from evergreen trees.

Although I’d previously dabbled with the idea of visiting Canada’s largest province, roughly five times the size of France, it somehow always felt a bit too far and too pricey.

All that has changed with the introduction of a the first ever direct link between the UK and Quebec City, is offered exclusively by Air Transat, with fares starting at £349 return – cheaper than some peak season summer fares to the Med.

Taking seven hours and 30 minutes to reach the vibrant, predominantly French-speaking city, it presents opportunities for exploring the wider area within a short break.

Better late than never, I’ve come to find out what’s on offer…

Pedal through the province 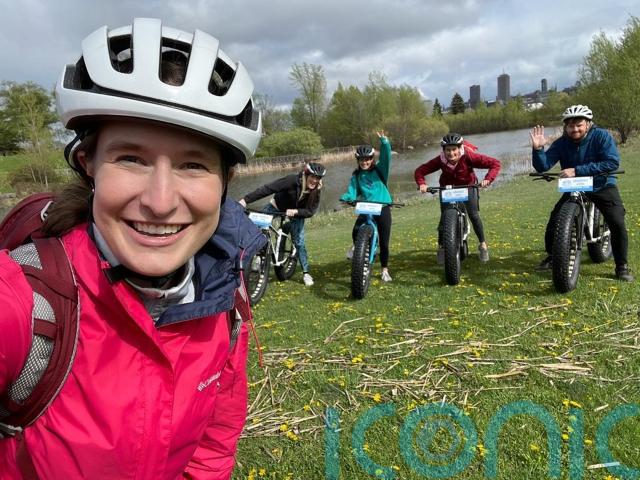 Bike tours from Tuque & Bicycle Experiences (quebecfatbike.com) give riders the perfect snapshot of Quebec City and its surrounding natural beauty. The most exciting route takes four hours and starts from the steeple-filled Old Town before heading to Montmorency Falls, a natural wonder that stands more than 30 metres taller than Niagara.

And in the pleasant suburb of Limoilou, tours trundle past sites you won’t find in a guidebook – such as steel fences made from stencils used to cut ice skate blades, now surrounding homes. An introduction to Fatbiking starts at CA$79/ £49. 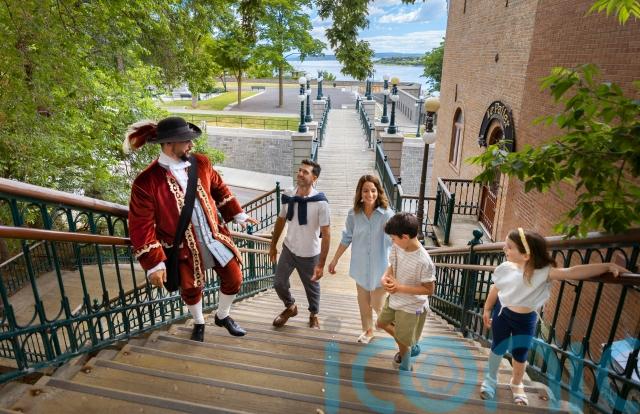 The name Quebec literally means ‘where the river narrows’ in the native Algonquian language. It’s here, where the St Lawrence River sits one kilometre wide, that the city looks its fairy-tale best.

Spires from Anglican and Catholic cathedrals clamber into the skies in a battle to stand taller than each other. New France, as the city was once known, was a site of conflict between French and British forces, both of which have left their mark on the city. Today, more than 85% of the province class French as their first language. Cicerone Tours (cicerone.ca/en) offer trips with a guide in period costume from CA$28/£17.

Stay at the Fairmont Hotel 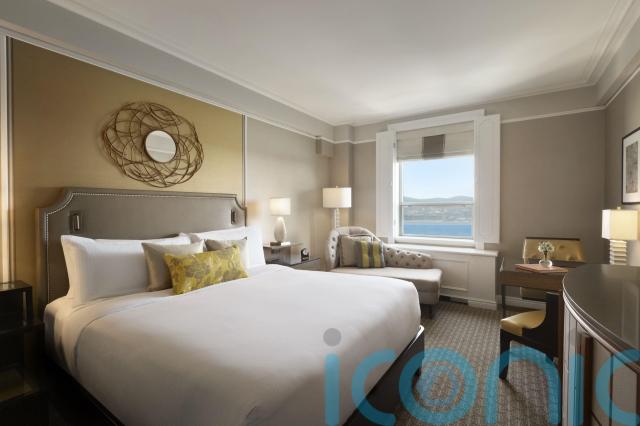 Nowhere captures the old-world charm of Quebec City quite like the Fairmont Le Château Frontenac. Built in a French renaissance style, using stone imported from Scotland, the beautiful structure dominates the skyline. It’s played host to the rich and famous, including Grace of Monaco, Alfred Hitchcock and Queen Elizabeth II – who now have suites named after them.

Walking into the lobby feels like taking a step back in time too, where chandeliers and centuries-old paintings adorn the ceilings and walls. For those seeking better value rates, stay between January and June, when standard rooms start at CA$299/£186 per night. 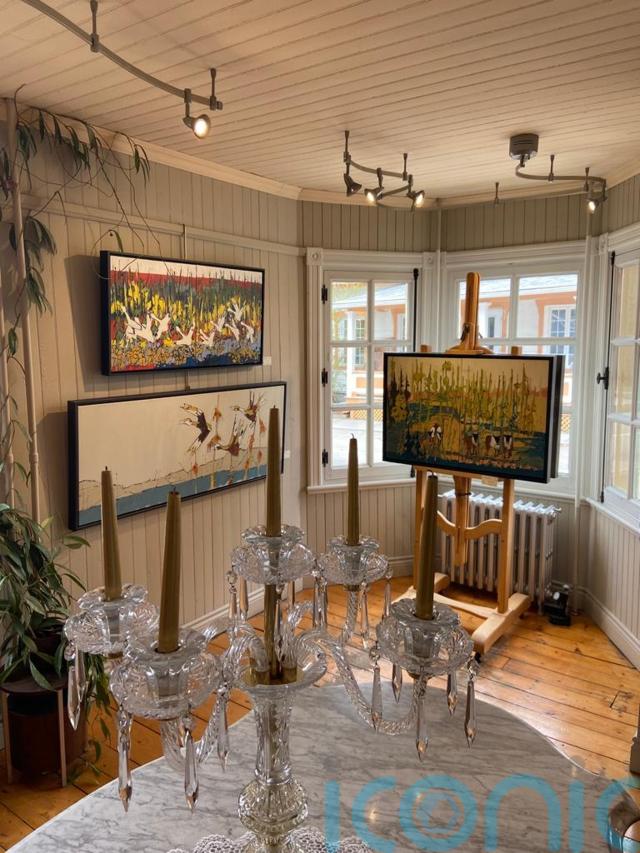 Walking through Baie St-Paul, just over an hour’s drive from Quebec City, it’s easy to imagine the picturesque village in years gone by. A pristine church sits at the heart of the action and buildings on the main street are lined with wooden porches. It feels like a typical North American town, apart from one key difference: more than 20 art galleries fill the quaint buildings.

Collector Gilles Charest owns the oldest of them all, Galerie Art et Style, which opened in 1965. He’s also responsible for Galerie L’Harmattan, which displays more abstract work. Gilles receives requests from up to 150 artists a year to sell and display their work at his galleries. The vivid colours and unorthodox sculptures can be bought on an instalment basis, part of Gilles’s plan to bring an appreciation of the arts to the masses.

Eat, drink and sleep at a 17th century monastery


Le Monastère des Augustines or The Augustine Monastery, is unlike most monasteries you’ve visited before. The ‘haven of heritage, culture and wellness’ combines a not-for-profit hotel, museum, restaurant, chapel and spa, for a truly holistic wellness experience. Breakfast is served in silence in honour of the Augustine nuns who founded the site and still live here today, and to help focus the mind for the day ahead.

The on-site restaurant, Le Voivre, encourages mindful eating, serving seasonal ingredients from ethical producers in a buffet style for all to share. A museum tells the story of the resident nuns with over 50,000 artefacts in its cavernous cellar. Full-board stays including access to the museum and chapel start from CA$250/£155.

Walk suspension bridges and ride the AirCANYON at Saint Anne’s


More than 20 metres higher than Niagara and 1.2 billion years older, the waterfall at Saint Anne’s Canyon is one of Canada’s lesser-known natural beauty spots. Just 30 minutes from Quebec City, the crashing waves can be seen from Route 138, the major highway that runs parallel to the Saint Lawrence River and towards rustic region of Charlevoix.

Inside the park (adults CA$14/£8.70 and children CA$9/£5.60) there are three suspension bridges and walking trails. For an extra charge (adults CA$20/£16 and children CA$20/£12) it’s possible to ride the AirCANYON, a motorised chair for two, suspending riders 90 metres above the tumbling water below. Visit canyonsa.qc.ca/en.

Unwind at a Nordic-style spa


Life in Quebec is centred around the Saint Lawrence River, as demonstrated by Strøm Nordic Spa ( stromspa.com/en), a Scandi-inspired sanctuary in the city’s Old Town. Here, infinity pools, saunas and hammocks face the city’s main waterway to draw attention away from the buildings inland and towards the calming waters.

The former dockland is filled with the smell of pines, thanks to a gardener who ensures all the plant life can be rooted back to Europe. Facilities include a salt exfoliation station, a soothing infrared room and the blissful floating pool, where salt levels keep bathers afloat without the need to move a muscle. General entry to the spa costs from CA$59/£37 Monday to Thursday, except in high season, and CA$74/£46 Friday to Sunday, all year round.

Trailfinders (trailfinders.com) offers a four-night stay in Québec from £255 per person, based on two adults sharing and excluding flights.