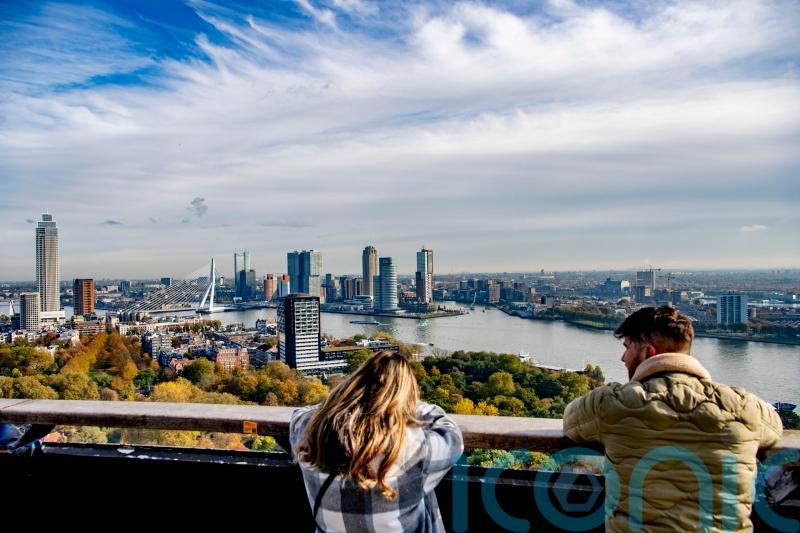 “Let’s get above the noise,” our enthusiastic guide instructs us as we stand with our eyes closed, bathed in sunshine in the middle of the farm.

There are a few chickens scratching around their large coup to my right and pretty purple, pink and yellow flowers growing to my left.

In the distance is the sound of trams, cars and the bustle of a city beneath our feet. 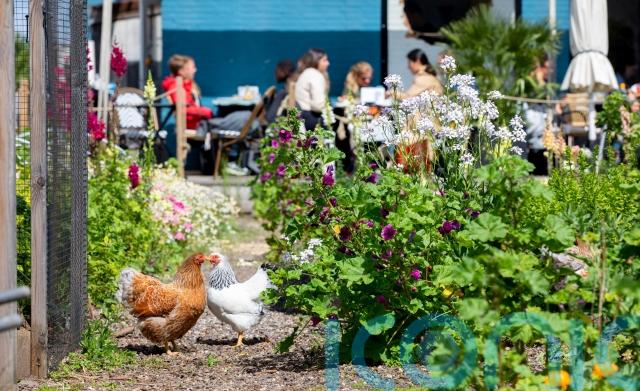 We’re seven storeys above the streets in DakAkker – the largest open-air roof farm in the Netherlands and one of the biggest in Europe.

The place epitomises Rotterdam’s forward-thinking approach to their city, which focuses on making the best use of space while being environmentally friendly.

Aerial bombardment during the Second World War left most of the city centre flattened.

Its newer architecture might not be as traditionally pretty as the historical buildings lining the canals of nearby Amsterdam, but it does leave plenty of space in the sky on which to build for its growing population – 40,000 were living in the city centre in 2017, but that is expected to rise to around 60,000 by 2030. 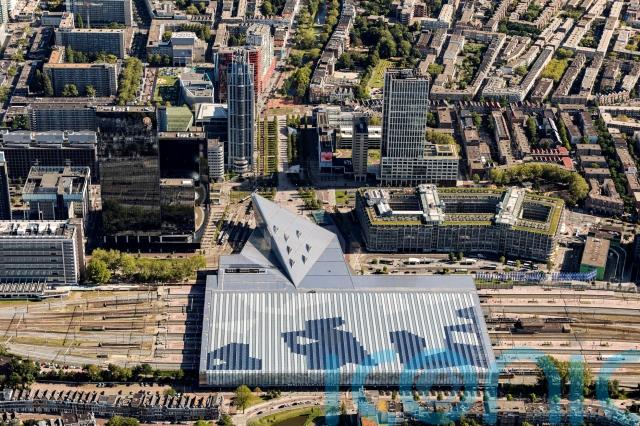 From systems to catch and recycle rainwater to beehives and solar panels, Rotterdam wants to put more of its 18.5 square kilometres of mostly empty flat roofs to good use, says our guide Esther Wienese.

Work on the Hofbogenpark – dubbed Rotterdam’s Highline – is due to start in 2024 and when complete, it will be the longest and narrowest roof park in the Netherlands, where visitors can stroll in a colourful and fragrant landscape above the city.

But for now, these are the best ways to see the Dutch city on a high.

Pose on a pink podium 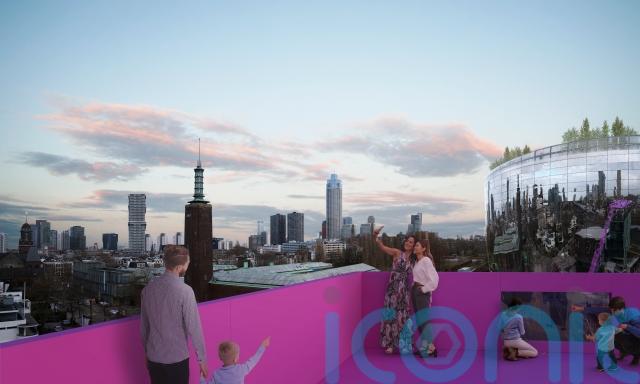 Until August 17, the Podium will take people 29 metres above the city via a scaffolding staircase made up of 143 steps. (There is also a lift, making it accessible for all.) Sitting atop the Het Nieuwe Instituut, the 600 square-metre space forms a temporary meeting place throughout the summer, playing host to a jazz festival and the Rotterdam Philharmonic Orchestra.

Its proximity to The Depot (the world’s first publicly accessible art storage facility) makes for a great selfie spot, with some of the city’s skyline – including the neon pink podium – reflected in the stunning mirrored facade.

How: Entry to the Podium is free unless for specific events. Visit hetnieuweinstituut.nl

See the city from the rooftops 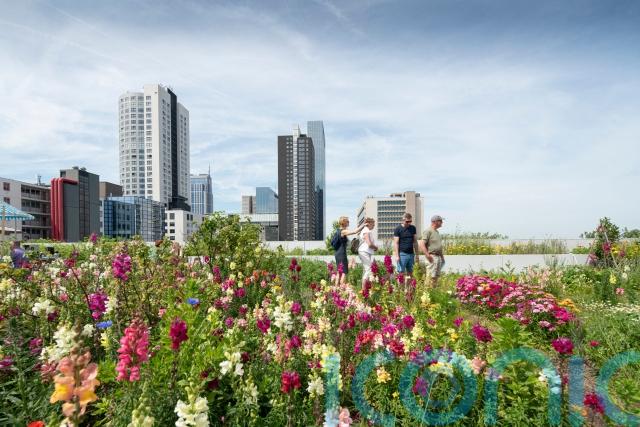 Esther Wienese and her colleagues at Inside Rotterdam offer year-round private guided rooftop tours in English. Take a peek at rooftops normally inaccessible to the public, such as the top of the Atlanta NH Hotel, which is one of the oldest rooftop terraces in Rotterdam – built before the Second World War.

From the rootftop of the St Laurenshuis office building – used by staff from various firms as a social lunch venue – we get a wonderful view of the only remaining late Gothic building in Rotterdam, Sint-Laurenskerk church. The bells of the church, which were badly damaged but survived bombing during the war, ring out to the tune of Danny Boy as we admire the view.

Also open to tourists, the Luchtpark (air park) on top of the old Station Hofplein is a great place to survey the city’s rooftops while perched on one of several artificial sheep dotted across the grass.

At weekends, tour groups can climb to the top of the 11-storey Witte Huis (WhiteHouse), taking in what the guides describe as a “remarkable 360 degree view” of the city. This pretty 45-metre high building was the first Dutch skyscraper, and was once Europe’s tallest office building.

How: A 2.5-hour tour starts from €32/£27 per person excluding booking fee. Visit insiderotterdam.com

Get naturally uplifted at DakAkker

Only fully accessible to visitors as part of an organised tour, this rooftop farm features plant pollinating honey bee colonies and ‘worm hotels’ where compost is made.

The venue claims to have the smartest roof in the Netherlands, due to its ability to store water according to the weather forecast. If extreme rainfall is expected, a smartflow control responds by making extra water storage capacity available 24 hours in advance.

If you’re not part of a tour you can still enjoy a coffee and waffle fries for less than €10/£8.50 at DakAkker’s cafe Ted’s All Day Brunch. On Fridays, come to watch volunteers harvest mint, beetroot, rhubarb and edible flowers.

Eat in a sky-high forest 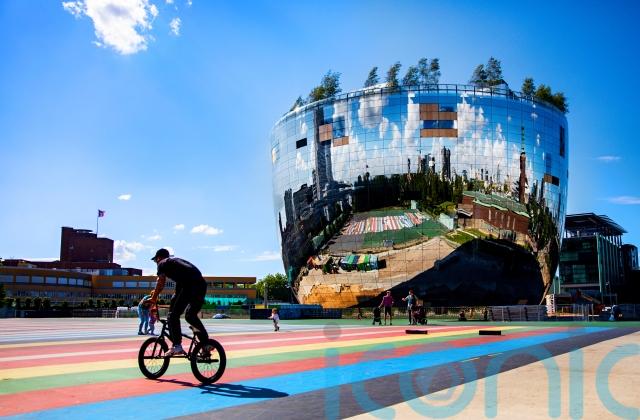 Surrounded by a forest, planted on the top floor of The Depot, Renilde restaurant promises wild dining 34.5 metres above ground.

Guests are served a surprise menu of at least four courses accompanied by wine pairings, with a guarantee that ingredients will be seasonal, fresh and generally locally-supplied.

My delightful dessert of white peach sorbet, almond cream and jasmine tea pearls is set down in front of me – decorated with edible flowers grown at farm in the sky, DakAkker.

How: Four courses at Renilde are €54/£46 with the wine pairing priced at €8/£6.80 per glass. Visit boijmans.nl/en/depot/restaurant 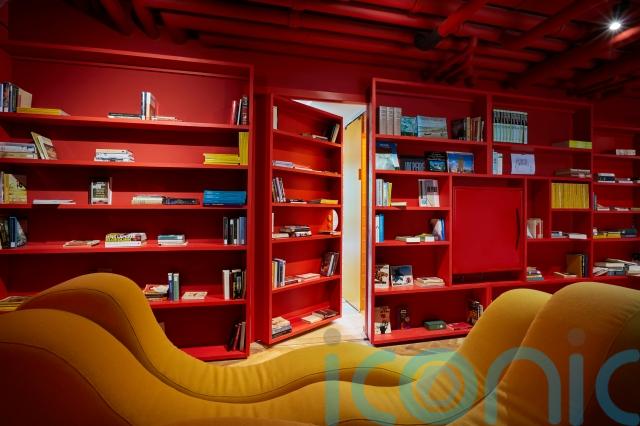 “Come with me and you’ll be in a world of pure imagination.” Willy Wonka’s words spring to mind as soon as guests step through the doors of Hotel Not Hotel.

Just a few minutes walk from Rotterdam Centraal train station and very much back on ground level, this quirky accommodation is a feast for the eyes. Bedroom doors are hidden behind bright red bookcases and a vertical swimming pool runs through one corridor – making it extremely Instagrammable if that’s your thing.

The hotel group, which also has accommodation in Amsterdam, teamed up with artists to create wacky designs for its rooms.

While it might not be a five-star stay and some of the rooms are fairly compact, the bed has me feeling like I’m sleeping on a cloud.

It’s all-red restaurant/bar area – Jesús Malverde – is a great spot for a margarita and some Mexican street food.

Eurostar offers three direct services a day from London St Pancras International to Rotterdam Centraal, with one-way fares from £39 (based on a return journey).

Passengers can take two suitcases and one piece of hand luggage with no weight restrictions and at no extra charge. Visit eurostar.com

Doubles at Hotel Not Hotel in high season cost from €110/£86, room only. Visit hotelnothotelrotterdam.com