Rare letter written by Oliver Cromwell to be auctioned in Edinburgh 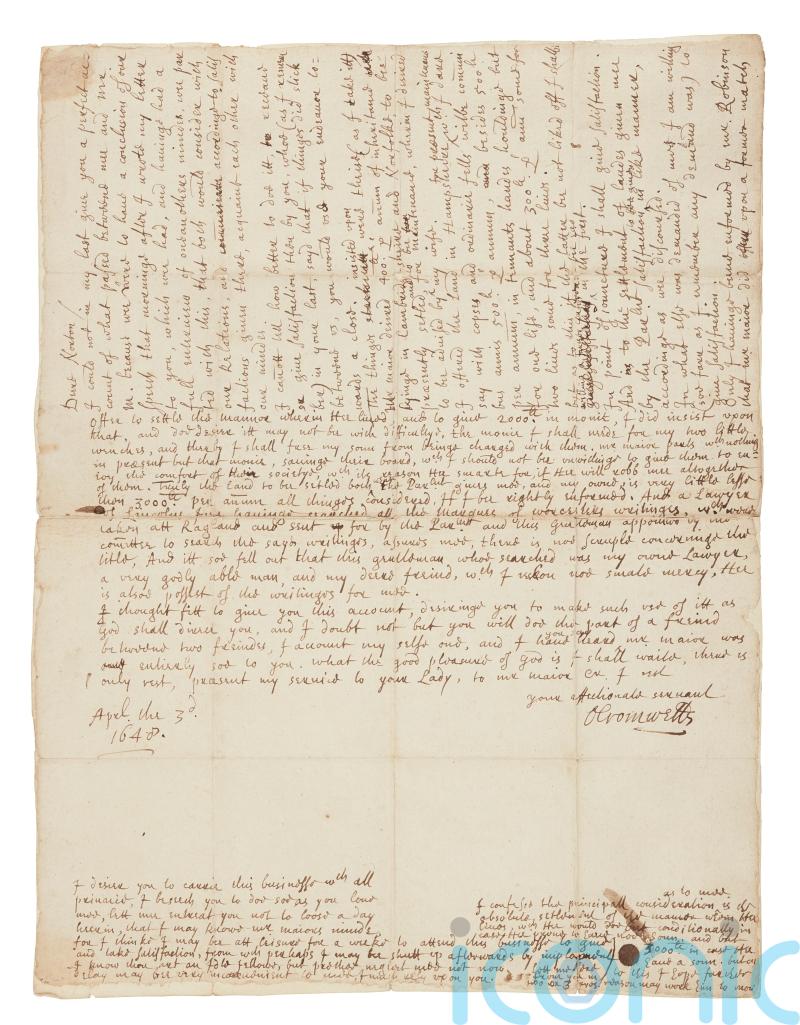 A rare letter written by Oliver Cromwell in 1648 will be sold at an online auction in Edinburgh.

In the letter, Cromwell discusses intimate family affairs such as his son’s marriage and the fate of his two younger daughters.

The document will be sold by auction house Lyon & Turnbull on Wednesday September 28.

Cromwell led the Parliamentarian forces against the Royalists in the English Civil War and oversaw the execution of King Charles I in January 1649.

The letter is addressed to Cromwell’s friend, Richard Norton, who served in the parliamentary army, a month before Cromwell led English troops to a bloody victory over the Scots and Royalists at the Battle of Preston.

Cromwell writes: “I desire you to carrie this businesse with all privacie, I beseech you to doe soe as you love mee, let mee entreat you not to loose a day herein, that I may know Mr Maiors minde… I much rely upon you.”

Bidding for the letter will begin at £5,000 and is part of Lyon & Turnbull’s rare books, maps, manuscripts and photographs sale on Wednesday.

Also featured is an album of 120 letters by a range of Victorian figures including: Charles Dickens, William Thackeray, Robert Browning and William Holman Hunt.

One highlight in the collection is a letter by geologist Charles Lyall to the Scottish Lord Advocate mentioning a “geological appointment” with Sir John Lubbock and Charles Darwin.

Dominic Somerville-Brown, Lyon & Turnbull’s rare books, maps, manuscripts and photographs specialist, said: “We anticipate international interest in this particular auction, given the significance of these exceptional items – including Cromwell’s letter – and the two albums, which have been in the Kinnear family for generations.

“These important documents and images capture the personalities and times of a range of hugely important historical figures.

“It’s always the human stories and personal touches which capture the public’s imagination.”