'Never' seems to be the hardest word for Seamus! 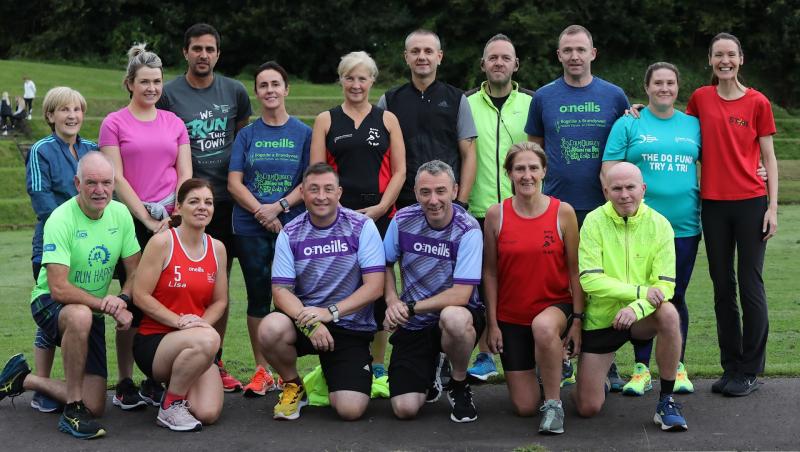 Seamus Crossan and Stephen Quigley leave the Gasyard with their supporters on Tuesday evening on day 20 of their 30-day challenge. Pic by Tom Heaney, nwpresspics

Seamus Crossan now knows that the word ‘never’ has a fluid meaning, especially when he has someone who can twist his arm running beside him.

Almost a year ago, Seamus ran 100 miles in one day to help raise an amazing £20,000, money which helped buy a wheelchair accessible vehicle for the residents at Belmont Cottages. In the aftermath of that event he promised he would never take on a challenge so daunting ever again, but fast forward 11 months, and he is at it again.

“This is all Stevie’s idea; he’ll blame me, but I’m blaming him,” he insisted. “I said that after running 100 miles last year that I would never do anything as mad again, but we’ll see what comes. I’m not planning anything else any time soon.

“We just thought that we were feeling good and comfortable at a half-marathon distance. Other people put their lives on the line for other people so we just thought we would up it and try to push ourselves to the limit for the last seven days. We had talked about a marathon on the last day for a finish, but we were both off work and we’ll probably not get this opportunity again with the women so let’s go for it.”

As experienced a runner as he is, the human body is fragile, and unsurprisingly, Seamus has certainly felt it at times in the past three weeks.

“The thought of something like this seems really easy, but it’s different every day getting out. I do look forward to it, and the fact that I’m just out running with my mucker, 13.1 miles a day, but at times it takes its toll,” he admitted.

“We have a late finish on a Wednesday night and an early start on Thursday morning so it’s an 8-hour turnaround and that’s when we’re feeling it the most. But outside that, it’s great and we’re looking forward to meeting up and everybody coming out to support us, which is brilliant.”

On Tuesday past, it was running group ‘Born To Run’ who accompanied Stephen and Seamus on their way, and that support has been invaluable to both men.

“There are people there and they are pushing us along, or maybe towing us along, pulling us to the finish line,” he acknowledged. “There was one day after 10 miles that I wanted to stop, but the person that was out with us just seemed to drag us around and help us grind it out for that other 3.1 miles. We got it finished, had a 36-hour turnaround until the next night and that really helped. We had a good bit of recovery with hot water and cold water and compression boots so it was really good.”

"Will we change it to a marathon a day instead?' Aye, why not?"

Perhaps the most important aspect of this challenge is the two charities which are set to benefit – the Foyle Search and Rescue and the Danny Quigley Fund through the Bogside and Brandywell Health Forum.

“They are two charities close to our hearts,” Seamus admitted. “I’m a mental health nurse myself and it’s all about intervention and prevention. You know yourself, in this town, there’s someone close to everyone, who has struggled.”