A protest planned for October 1 has been officially confirmed by the Lakeside Park/Highfield/Dara Park (LHD) Action Group following a meeting in Newbridge last night.

Earlier this week, resident and member Noreen O' Shea told the Leinster Leader that due to a lack of response from the government, the LHD Action Group would hold a meeting at the basketball court between Lakeside Park and Dara Park to discuss the possibility of organising a protest.

The LHD Action Group was set up following a public meeting with residents of the three estates on Thursday, August 25 last.

The meeting came about after Sinn Féin (SF) representatives told local residents that the Department of Children, Equality, Disability, Integration and Youth planned to install 30 modular homes for displaced Ukrainians at Lakeside Park, as well as another 30 homes in Beechgrove, Rathangan.

Opening the Action Group meeting was member Tom McDonnell, who said that while the initial meeting with Minister Roderic O'Gorman and the Office of Public Works (OPW) was 'very positive', he was nevertheless disappointed at the lack of a follow-up response from the government. 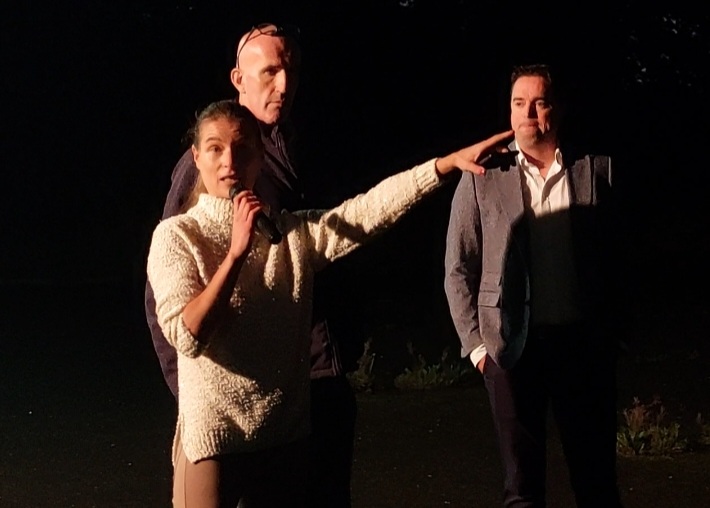 Noreen O' Shea speaking at the event. Behind her are Tom McDonnell (LEFT) and Martin Heydon TD (RIGHT).

He pointed to 'chronic flooding' in the area, in particular citing one channel that is prone to being water logged.

Mr McDonnell explained: "Kildare County Council (KCC) came up with an okay-ish idea to back the water up from the lake back onto the area where the modular homes are being proposed.

"It’s not a satisfactory solution in any way, it turns into a quagmire, but it’s the best they can do, because they can’t stop the mainline to Dublin, so unless they fully close the line down, the issue of flooding can never be (fully) rectified.

"Yards of houses in Dara Park do not drain out properly due to the flooding," he added.

He also said that he spoke to a neighbour who said she has had her home flooded seven times, and often resorts to putting sandbags near their doors, while another said that sewage came into her yard.

He said about the proposed implementation of modular homes in the area: "It will be a nightmare, there’s no way it can be handled."

He also suggested the Curragh as a potential location to house displaced Ukrainians: "It’s been there since Michael Collins and the great Irishmen won it back from the British. It’s 5,000 acres of the best land in Ireland, why don’t they put them there?" 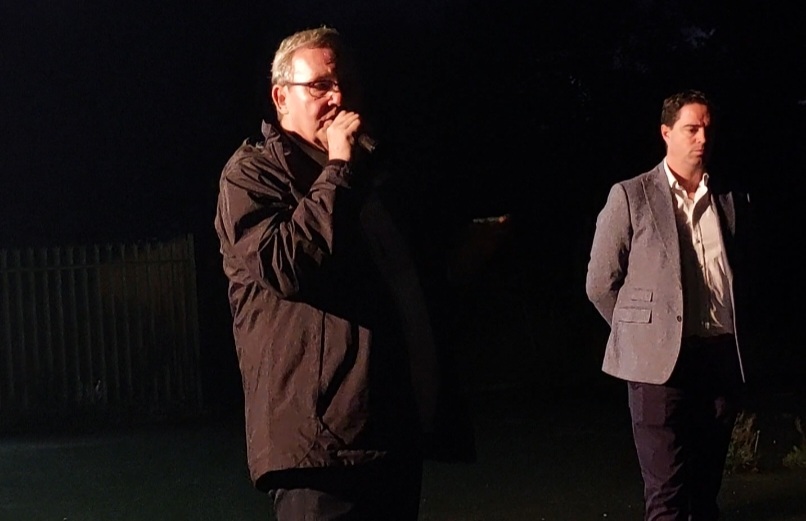 Cllr Noel Heavey at the event

LHD Member Noreen O' Shea criticised the government for planning the homes in a 'sly' manner, and said that at the meeting, the group gave Minister O' Gorman six points about why they were opposed to the modular. However, she said he only came back to one point, and read out his response to the crowd.

She said that the Minister only addressed flooding concerns: "With this decision, he is disregarding the needs of people of this estate. They are not taking us seriously, so we need to stand firm and show them that we will not accept this.

"County Kildare is not equipped to take in any more people," she added.

Ms O'Shea also earned a round of applause when she claimed: "The Irish government are not looking after their own, they have left us like second class citizens in this country, and we’ve had enough."

She added: "It’s time to stand up and say ‘you are working for us and you need to remember this, the nice comfortable wages. They need to remember why they are here. They are looking at the EU incentive but not at the Irish people."

When she was about to say a sentence that appeared to imply that the group were preparing to block something, she was interrupted by someone who asked her to let one of the local representatives speak.

Minister Heydon then offered to speak, where he said that the process regarding the modular homes 'has been anything but satisfactory.'

He said that he and his colleagues — Cllr O' Dwyer, Cllr Tracey O' Dwyer and Cllr Mark Stafford — brought up the issue at the Kildare-Newbridge Municipal District meeting on Wednesday last, where they put forward a motion regarding the criteria for modular homes to be considered in certain areas.

Mr Heydon also said that he is 'familiar' with flooding in the Dara Park area, and criticised the idea of putting modular homes on a known floodplain.

When he said that Ireland needed to deliver modular homes for displaced Ukrainians, some people in the crowd asked: 'what about the Irish people?'

This prompted Noreen O' Shea to say to him: "The Irish government brought them in, we never asked to bring them in.

"The government knows that there is a homeless crisis."

Mr Heydon stressed that modular homes should be for Irish and Ukrainians, and said that he had told Minister for Housing Darragh O’Brien this as well.

When he said that the minister had 'given a firm commitment that nothing will happen', he was interrupted by Ms O' Shea, who disputed this.

At one point, she claimed: "You know you’re going to lose your seat next year?"

Noreen O'Shea later apologised to Mr Heydon for this comment, calling it 'unnecessary and uncalled for,' adding: "It was heated and angry, and I am angry at the government for putting us in this position."

One resident asked Mr Heydon: "If this was a private site and someone put up modular homes, do you reckon KCC would complain if someone put up those houses by themselves, without asking? There would be an uproar," which earned her a round of applause.

In response, Mr Heydon said that he agreed with her on this point.

Noreen O' Shea then spoke once again, where she said: "The modular homes have 60 year lifespan. Why will they will get carpark spaces and other permanent fixtures? (Because) they're here for good.

"The government have free run of the country under emergency laws."

She also expressed frustration over proposed lighting in the area: "People (the residents) have fought for ten years to put in lights, but now all of a sudden, they're putting in lights for the Ukrainians? I don't understand it."

Cllr Noel Heavey then claimed there was 'a deliberate policy (by the government) of not fully informing the people and getting displaced Ukrainians in as quickly as possible, and without any scientific studies.'

He also pointed to flooding issues in the area, but emphasised that the necessary scientific studies will take time.

Cllr Heavey also praised the efforts of the LHD Action Group as being 'top class'.

Mr McDonnell then was handed the microphone and said:  "We don't need a big investigation with the OPW, all this bulls**t. 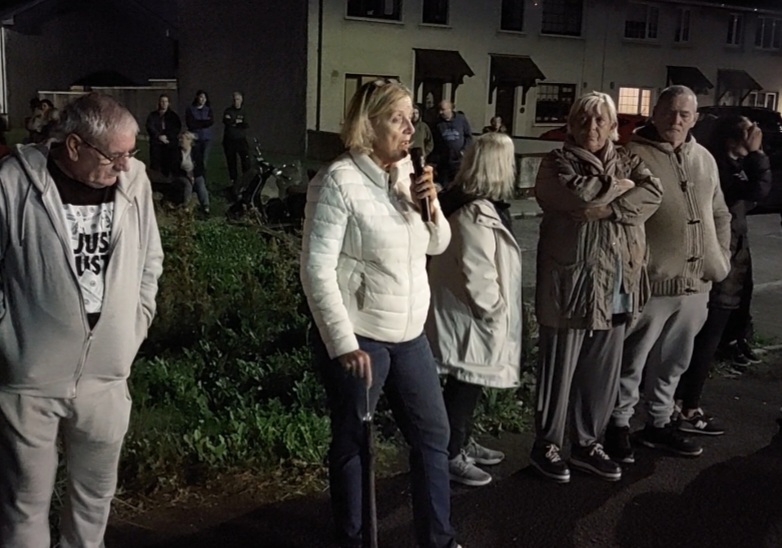 Cllr Peggy O' Dwyer then spoke, where she said: "We need here to be like the Liffey Linear Park. No one comes to Dara Park."

A number of residents, including Ms O' Shea took offence to this comment.

At a later point, she apologised for how her  comments came across, and said that she meant no offence.

Sinn Féin representative for Newbridge Joe Burke received backlash when he said that there are sewage issues in the area, 'but not flooding.'

When one resident vocally disagreed with him and kept interrupting him, he told them to 'shut up for a minute.'

In response, Ms O' Shea approached Mr Burke and told him to show some respect.

"And you have some respect for me," he replied. 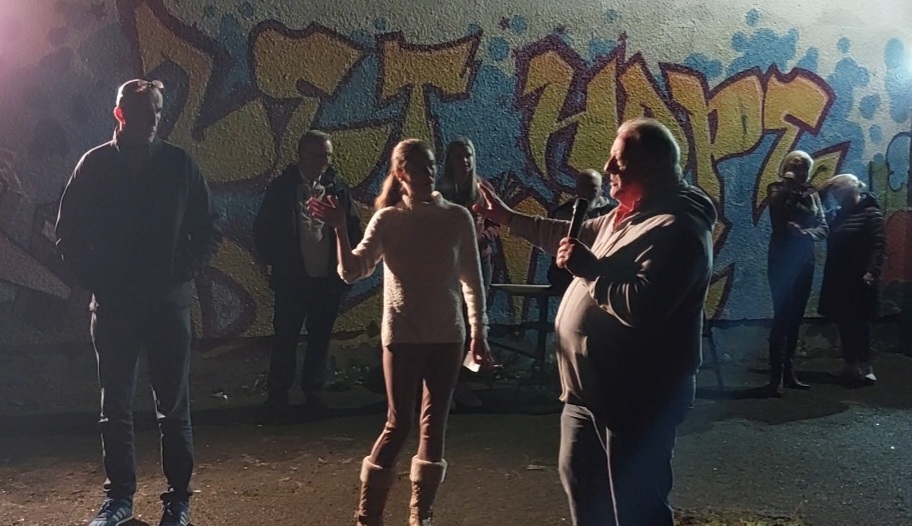 This prompted Mr Burke to ask him: "Where were you when the flooding was here?", to which Mr McDonnell replied: "I was living here."

One elderly woman heckled Cllr O' Dwyer, who said that she had taken in a Ukrainian woman and her cat with her.

At the end of the meeting, Mr McDonnell and Ms O'Shea thanked everyone who attended and urged them to stand with the LHD Action Group at the planned protest.

Following the meeting, when asked by the Leader about what his strategy would be next, Martin Heydon said that he would continue to engage with the Minister and the OPW.

He also reiterated: "We cannot put the modular homes on a site with flooding."

Cllr O' Dwyer, who is the Secretary of the Newbridge Family Resource Centre, also told the Leader that capital funding been set aside through KCC 'for a master plan for the development of the whole area staring with the present upgrades to the footpath and the addition of new seating, which is due shortly."

She added: "I am committed to working with the residents to help make their open space fill with better amenities."

The Department of Children, Equality, Disability, Integration and Youth has said that the government has approved the development of up to 500 units of modular accommodation in different configurations over two phases, and that final configuration of sites will be informed by further site evaluation and engagement.

Both phases of the project are expected to be delivered by the Spring of 2023. 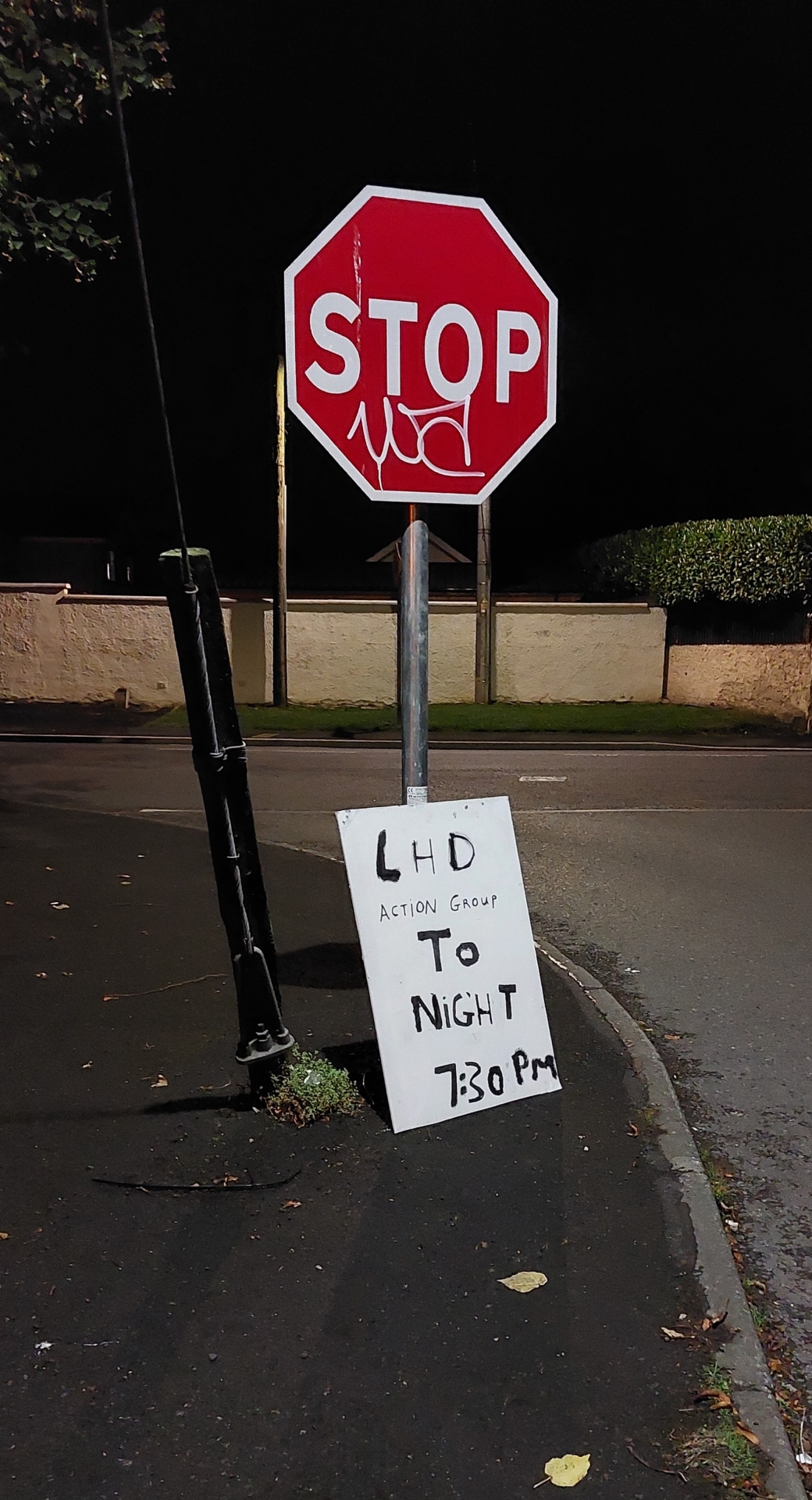