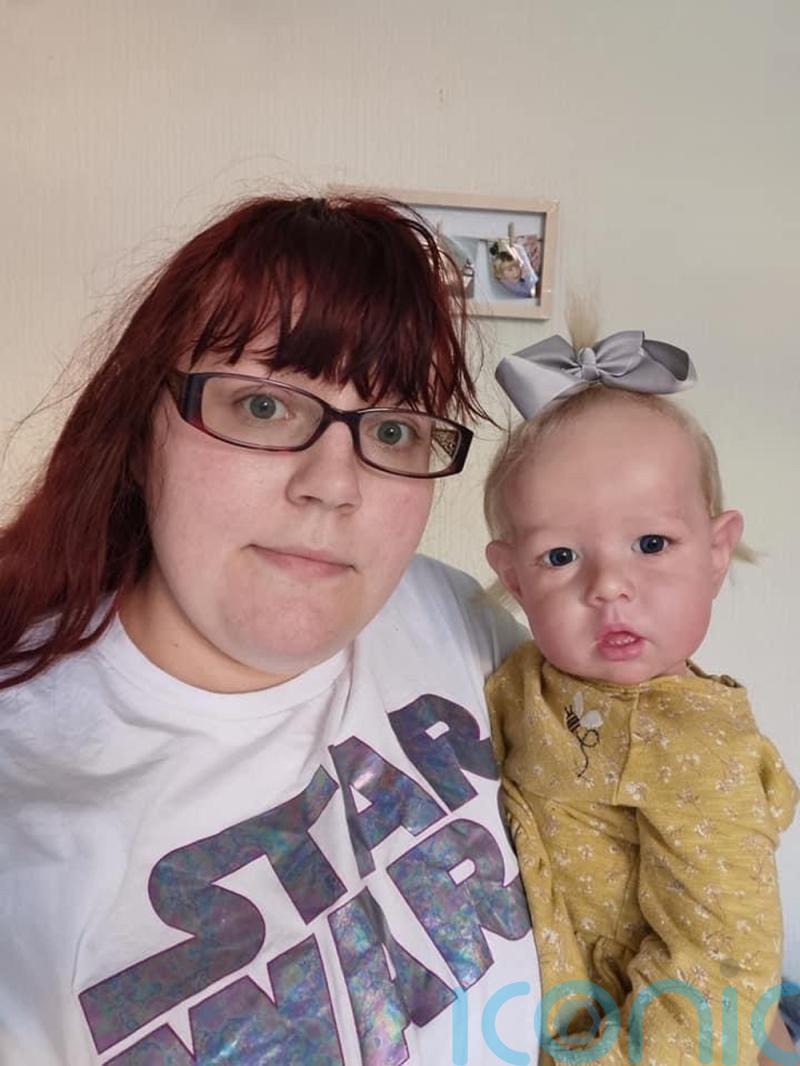 A pregnant carer who turned to her collection of realistic dolls known as reborns for comfort after losing six pregnancies in four years will be giving them their own nursery with the father’s blessing when their baby is born next year.
Natasha Harridge, 23, and her partner, milkman Jordan Rodwell, 26, are already preparing their three bedroom semi-detached house for their baby, due in February 2023, and have painted one nursery in yellow for the new arrival, as well as preparing a sage green room for her four reborn dolls.

Natasha, of Chesterfield, Derbyshire, said: “Even when I have my own baby, the reborns will always be a part of my life.” 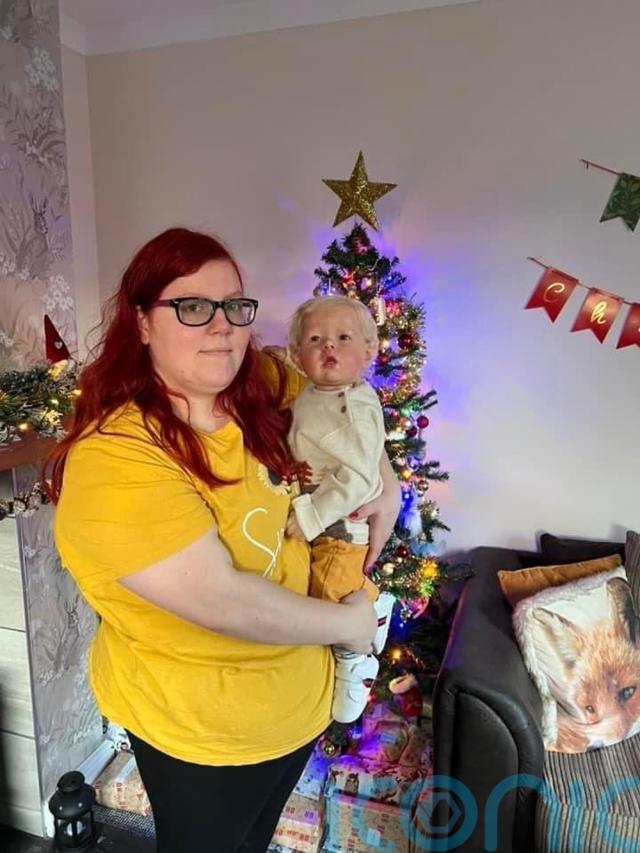 She added: “But when I lost my babies, it meant so much to me to be able to sit and cuddle them.

“I am fully aware that they are not real, but there is an emotional bond there and I do call myself their mum and love them.”

And she is already excited about introducing her real baby to her dolls, which cost around £500 each. 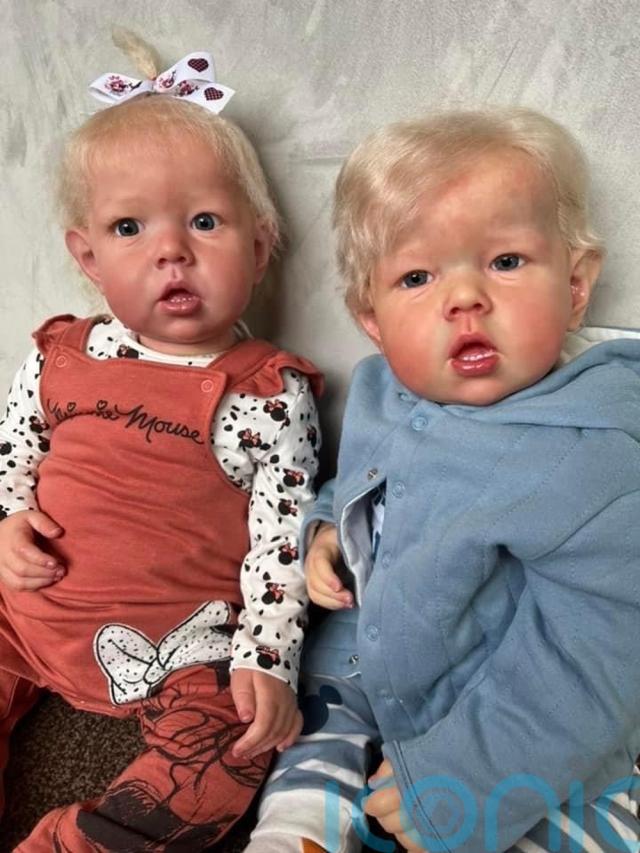 She said: “I won’t have as much time to spend with the reborns because, obviously, my real baby will be my priority. But I would love to be able to introduce them to each other.

“Once the baby gets a bit older, if they show an interest in the dolls, I would love to get  them their own reborn doll called a ‘playborn.’ They are made specifically for children and cost around £100 to £200.

“I like to imagine, once we have expanded our family even more, watching our son or daughter at Christmas opening their first reborn doll and seeing their expression.” 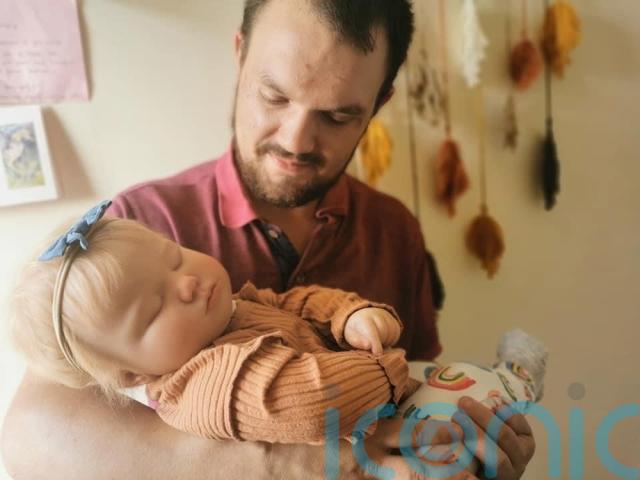 When Natasha introduced Jordan, who she met on a dating app in July 2021, to her reborn toddler Scarlet a month into their relationship, she was delighted when he “fell in love with her.”

She said: “He calls Scarlet his ‘Daddy’s girl’ now and loves her sitting on the sofa with him and interacting with her. 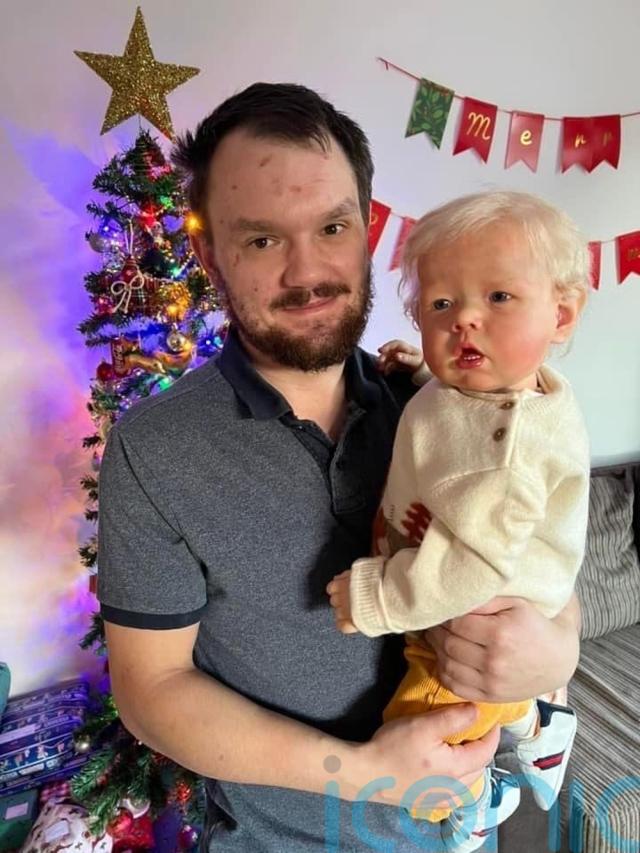 Jordan even suggested the couple bought their second reborn toddler together to keep Scarlet company.

Natasha said: “Jordan bought Sammie for £500 at Christmas, so that Scarlet could have a brother, which is really lovely.

“They stay in the nursery along with my newborn reborns, Meadow and Rue.” 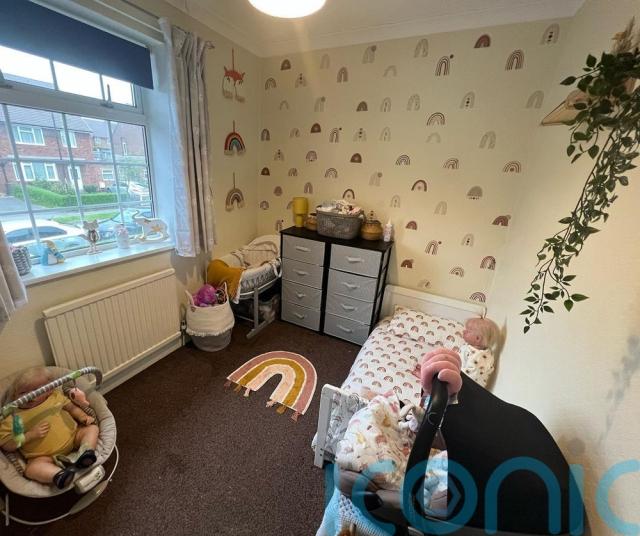 Natasha, who was adopted aged three, was bought her first reborn, costing £70, for her 15th birthday by her parents.

She said: “I found a video on YouTube just after Christmas of someone unboxing their reborn doll.

“At first, I was really confused, because it looked like a real baby, and then I realised it was painted. I really wanted one.” 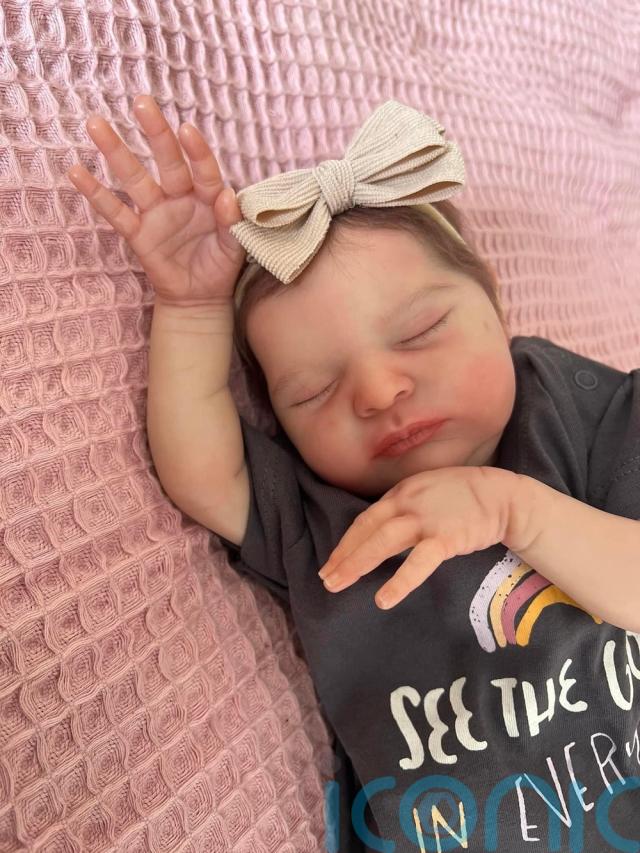 She added: “My first baby was Hannah, who had brown hair, closed eyes and open hands, so you could see her little toes and fingers.

“Whenever I had a bad day at school, I could come home to Hannah and it calmed me down to hold her and change her nappy and comb her hair.”

After that, for every Christmas or birthday, Natasha would plead with her parents for a new reborn doll to cuddle and look after. 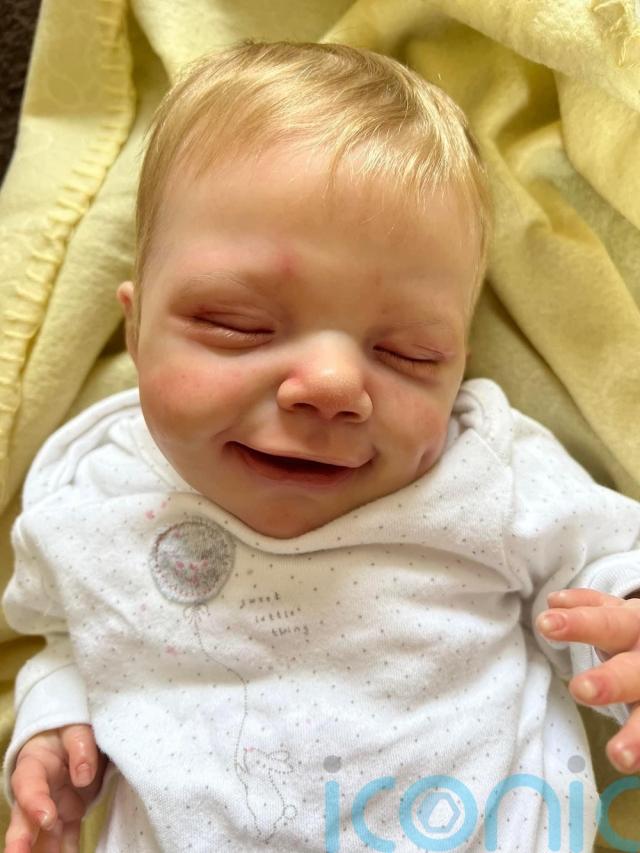 And in 2016 they took on a whole new significance after two of Natasha’s relatives miscarried.

She said: “I was so excited to meet their babies.

“When I found out they had lost them, I was honestly devastated. I couldn’t stop crying.” 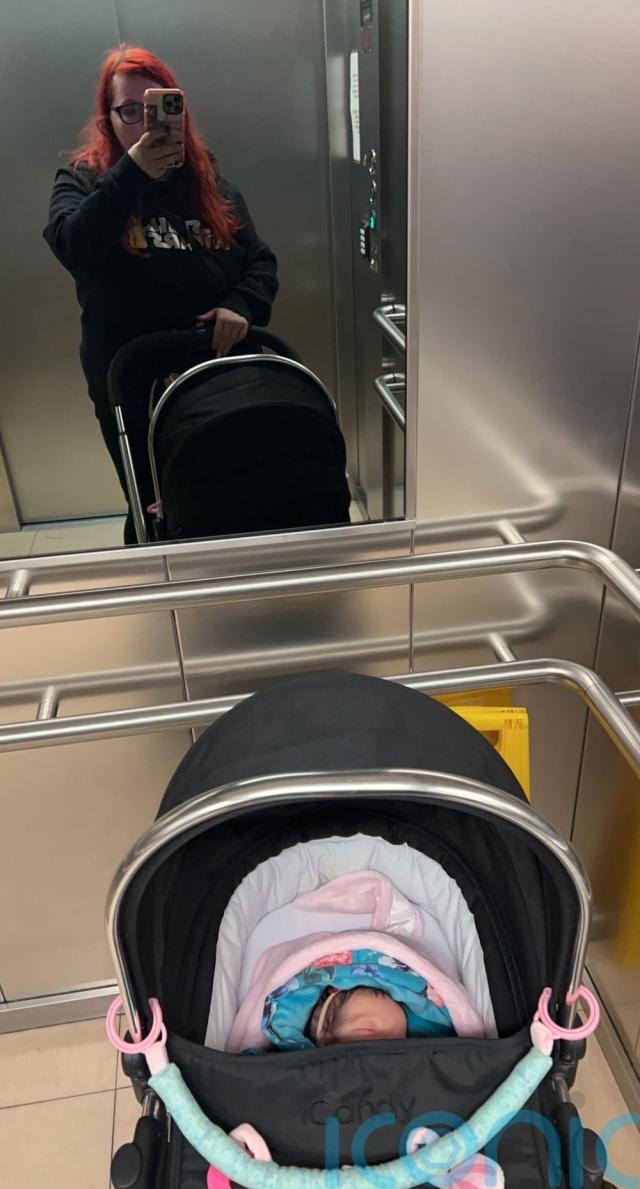 She said: “It broke my heart that I would never get to meet or know the babies.

“I just remember hugging Hannah, my reborn, so tightly.”

After Natasha started working full-time for her local council, aged 19, she bought more dolls – boasting a collection of 13 by 2018, worth around £5,000 – the most expensive being the blonde-haired “chunky” Everley, costing £1,000. 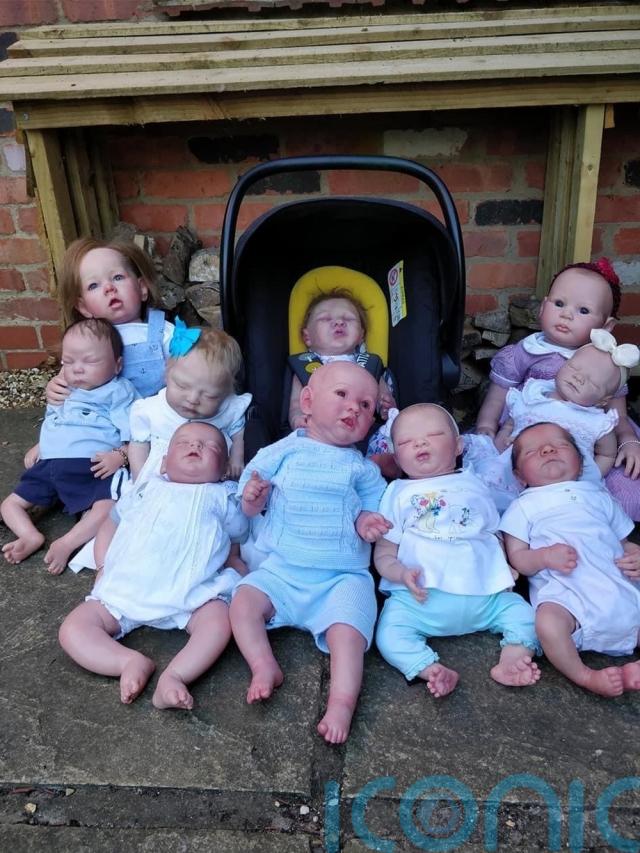 She said: “Most weekends, I would wake up, change them and take them for walks in a pram or sit and pretend to read them stories or feed them.”

Natasha also made videos with the dolls for her YouTube channel, which she started in 2015.

She said: “I started off with unboxing videos and tours of the dolls in my room.” 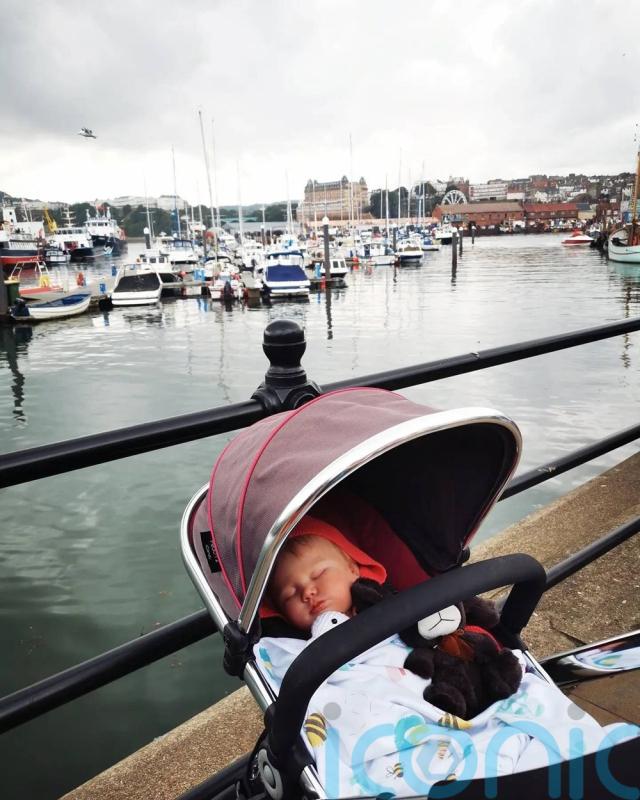 She added: “Then I had requests for role-play videos, so I would pretend to put them in the bath and hold their heads, or put them in matching outfits and film myself putting them in their buggy and taking them to the park.

“People would always think they were real and ask how old they were.

“If I was in a good mood, I would explain they were dolls and why I had them, otherwise, I’d just go along with it and say they were how ever many months old.” 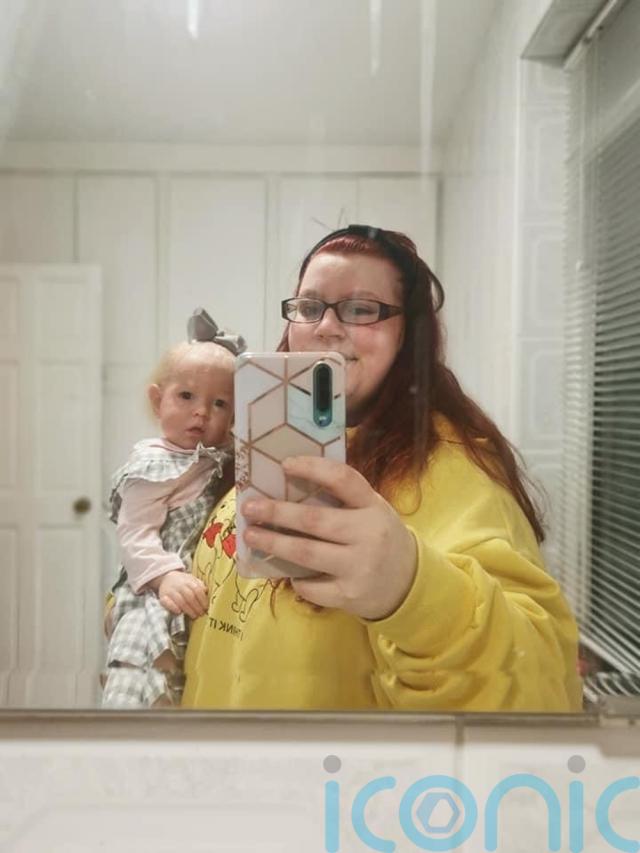 She added: “I love to look down the baby aisle when I’m out shopping and often buy a few bits or baby clothes for them, too.”

The dolls have even been on holiday with Natasha.

She said: “I took my Aubrielle, who had painted hair and absolutely gorgeous dark blue eyes, away with my family to Dorset  in 2017.” 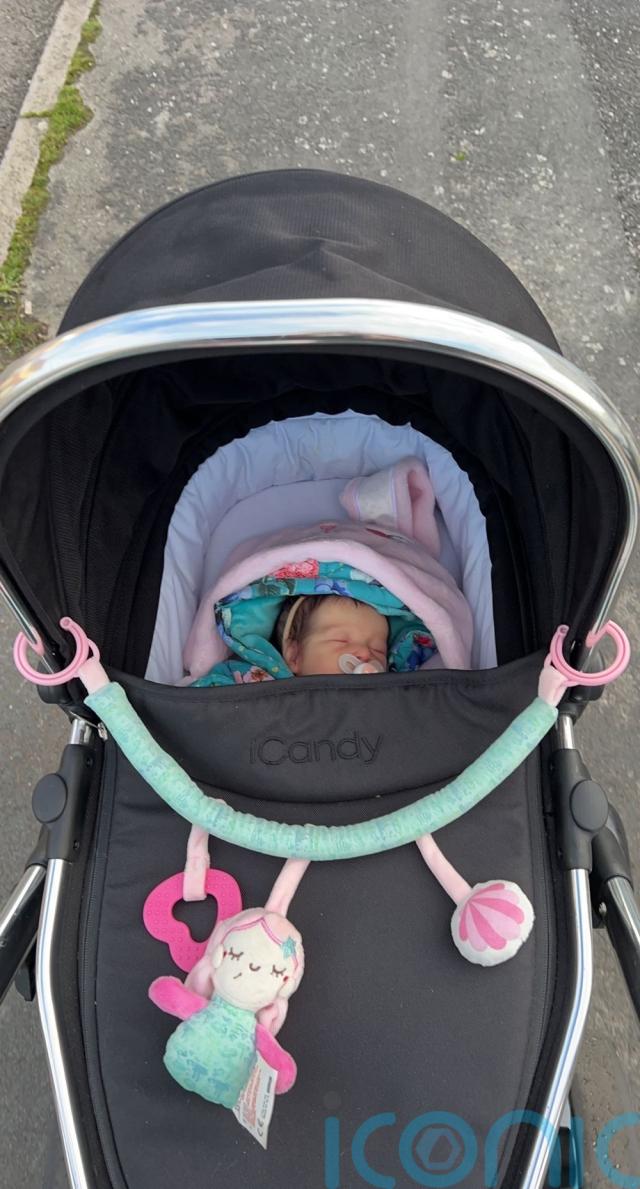 Natasha added: “It was so nice to have that holiday time one-on-one time to bond with her.

“I took her out around town a few times to look at the shops and down to the beach occasionally.”

And Natasha’s boyfriends down the years have also happily accepted her reborns. 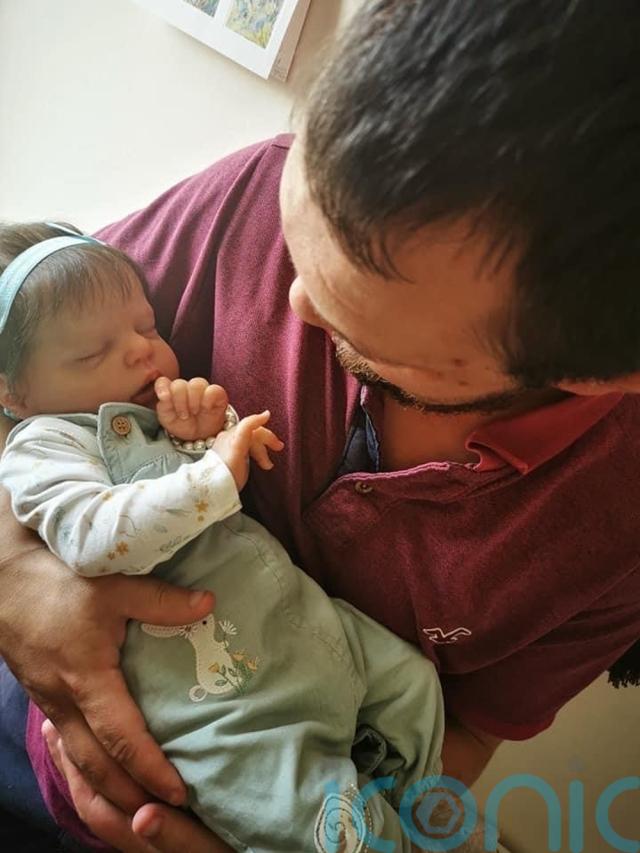 She said “I told my first boyfriend at 16 straight away that I had reborns and it didn’t bother him.

“I even took one of my toddler reborn dolls, Lucas, on a date with me to Birmingham, because I had to travel on the train, which I hate.

“My date thought he was quite cute!” 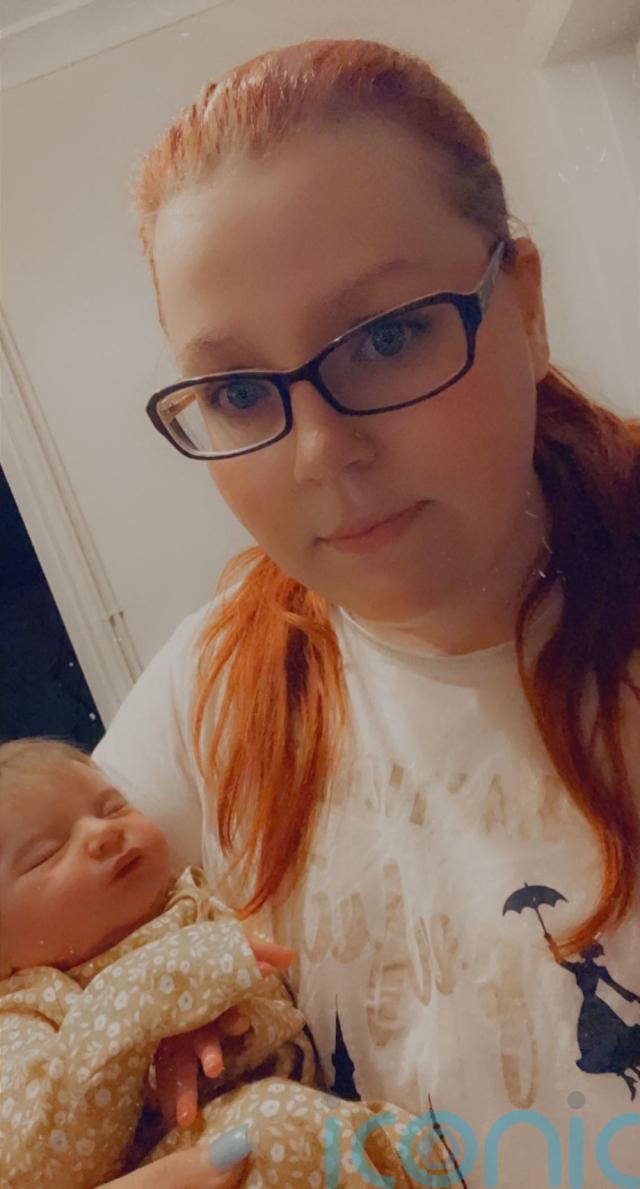 But the reborns – which Natasha has now reduced to a collection of four, selling some after she stopped interacting with them –  really came into their own when she tragically lost six pregnancies in four years.

Suffering two miscarriages with Jordan last year, she said: “It was devastating.

“The reborns will never replace my losses, but they did give me comfort. It really helped to have a cuddle with them and hold them.” 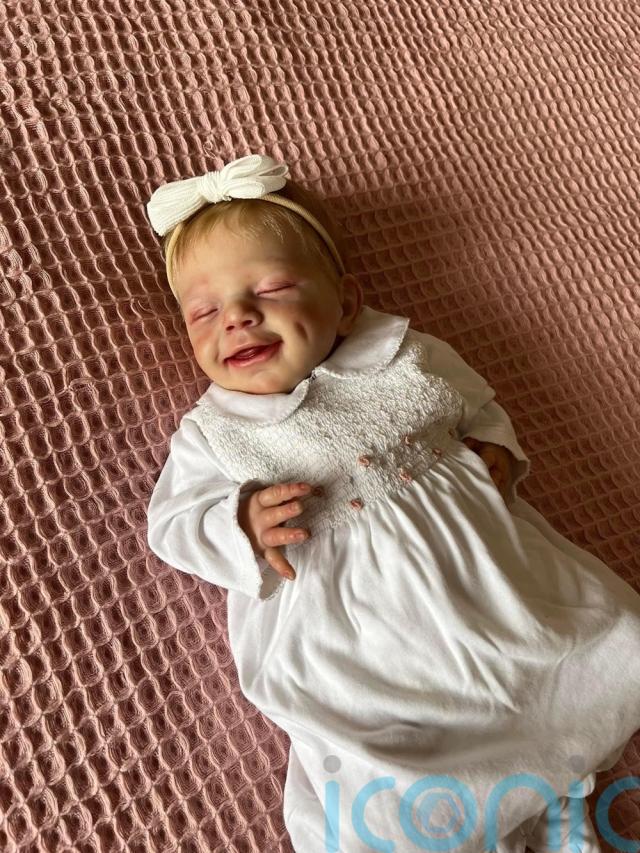 Before meeting Jordan, in November 2020, she had an ectopic pregnancy in her fallopian tube which ended in termination, also having three earlier miscarriages between January 2019 and April 2020.

She said:  “The reborns will never replace the babies I lost, but they have brought me such comfort.

“Now I can’t wait to have a baby of my own and to introduce them to the reborns.” 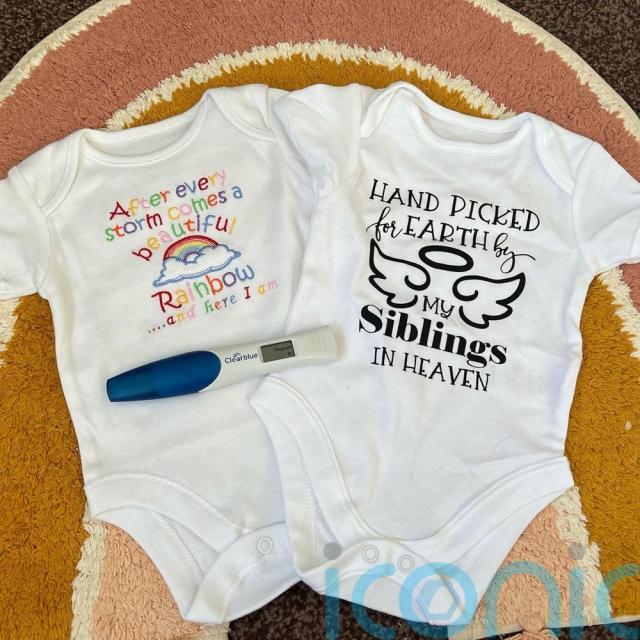 Natasha added: “They are obviously different, but I feel like they’ve helped me gain confidence and taught me how to hold and change a baby.”

A regular visitor to reborn doll shows across the UK, several times a year, she is already excited about their next show in October, in Peterborough.

She said: “I’ve been going for nine years and when I go next year, I will be taking my real baby, too. I will feel like I’ve come full circle.” 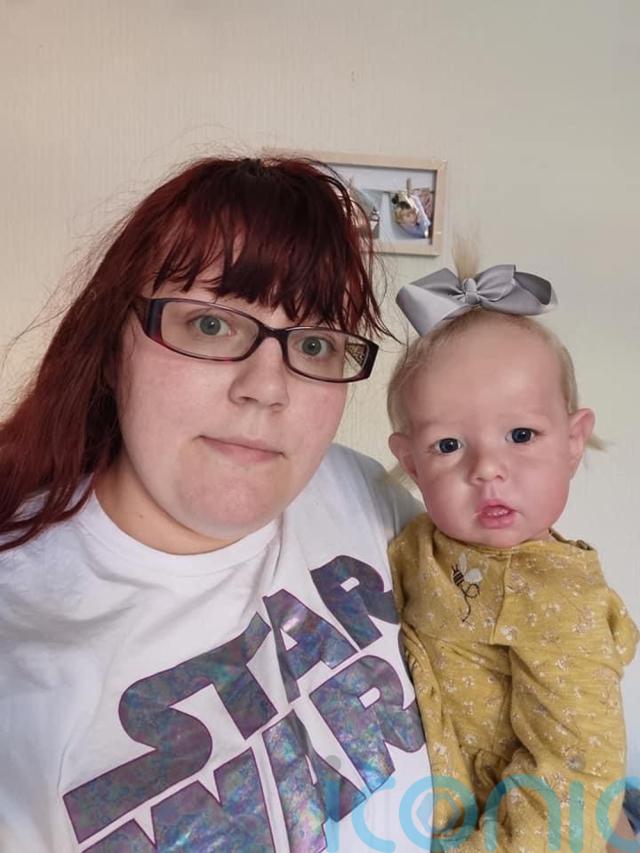 Jordan is also eagerly awaiting the birth of their baby and introducing them to the reborns.

He said: “Before I actually saw the reborns, I wasn’t that interested in them because I originally thought they were weird.

“But one day Tasha had Scarlet downstairs when I came over, after we had just starting dating, and about a week or so later,  I thought she was quite cute. Ever since then, I have shown more interest in them.” 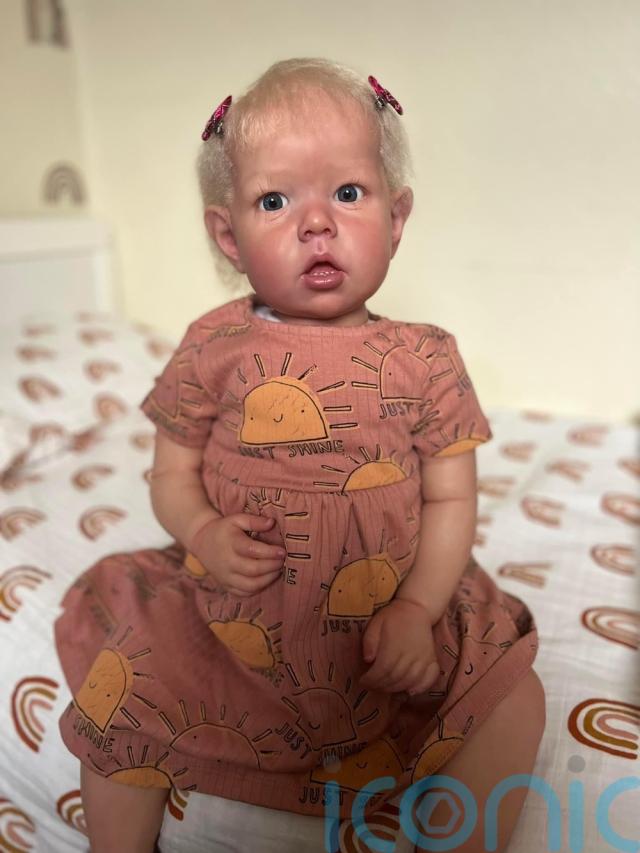 Jordan added: “I do prefer the toddlers. The babies are okay, but I find them very small and don’t really do anything with them.

“It will be a big change to have a real baby, but I have grown up around kids, so I have a lot of experience with babies.

“And I am excited for when they become a little bit older and I can show them new adventures.”

You can watch more of Natasha’s YouTube videos here – https://www.youtube.com/c/SouthWillowsReborns/videos