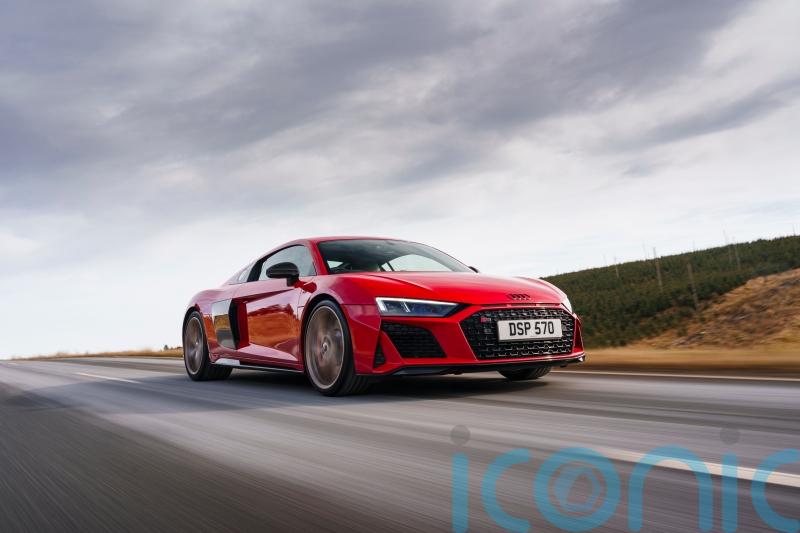 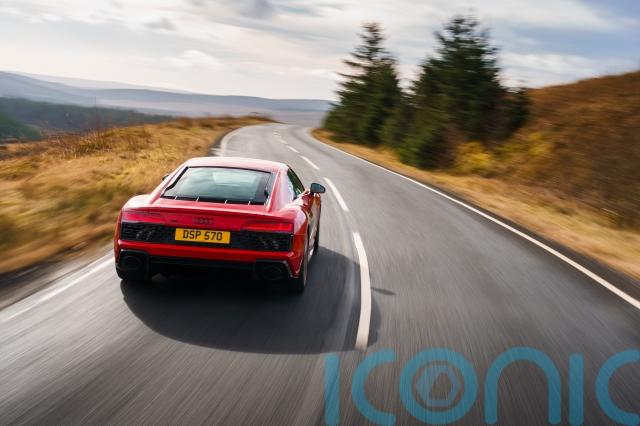 The Audi R8 is almost certainly a car moving into its twilight stages. The days of the big capacity supercar are numbered, with many of the R8’s rivals already moving to smaller, more turbocharged-orientated setups for lower emissions and better fuel economy.

But the plucky V10-powered R8 lives on, for now at least. Updated to bring even more power than before, we’re testing it here in RWD form with power being sent to the rear wheels rather than the more traditional four. 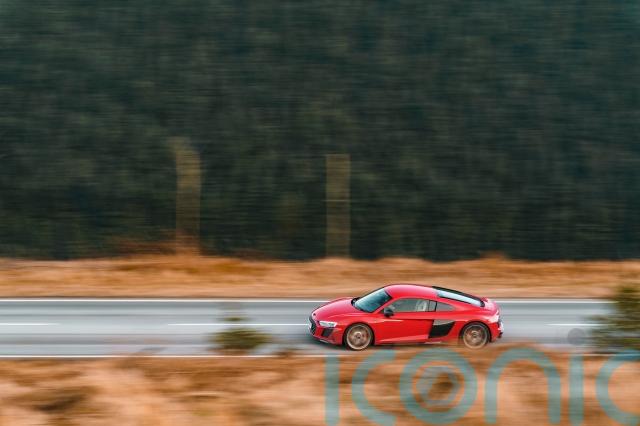 As we’ve already hinted at, the new R8 RWD gains more power than its predecessor – and that car certainly wasn’t lacking in punch. You can also get it in both hard-top coupe and drop-top Spyder layouts, with a lightweight aluminium body there to try and keep weight down. A range of carbon fibre reinforced plastics take these weight-saving efforts one step further, too.

It also acts as the ‘entry-level’ R8, albeit one that still has a huge amount of performance to hand. There have been some other tweaks made inside, but this is very much a mild update. There aren’t too many RWD-specific styling touches, either, though eagle-eyed spotters might see the ‘RWD’ lettering appear inside the cabin. 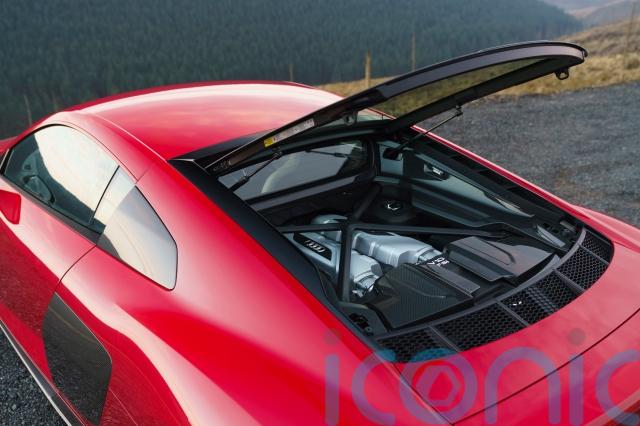 The R8’s appeal has always centred around the glorious 5.2-litre naturally-aspirated V10. Now kicking out 562bhp – 30bhp more than in the older car – as well as 550Nm of torque, it’ll send the R8 RWD from 0-60mph in 3.5 seconds and onwards to a top speed of 204mph. It’s certainly brisk enough.

As before, power is sent to the wheels through a seven-speed automatic gearbox. Understandably, an engine of this size is never going to be able to deliver tip-top economy figures, so Audi’s claim of 22.2mpg is hardly surprising. The R8’s CO2 emissions of 291g/km are pretty much what we’d expect, too. 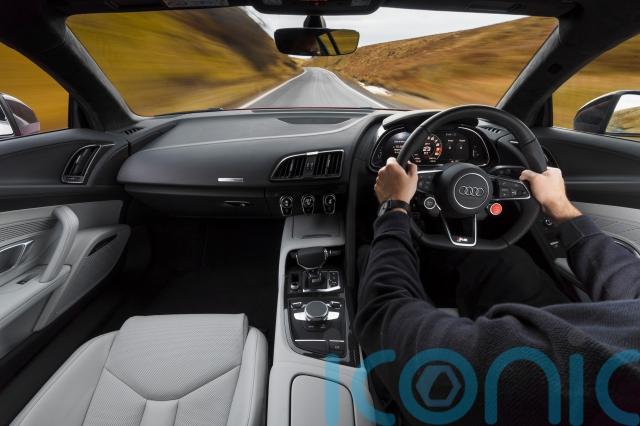 The R8 has always been an excellent multi-tasker and though this RWD version does, of course, lose out some of that all-weather ability through its two driven wheels – rather than the quattro’s four – this is still the case for the new version. It’s remarkably easy to drive, while on longer jaunts the R8’s well-sorted suspension ensures the miles breeze by.

That engine continues to shine through, though emissions regulations have made it a little more muted than before. Even so, its performance is superb with instant response and savage acceleration. The steering feels even sharper in this lighter RWD version and though it might not be the last word in feedback, it’s plenty accurate enough and doesn’t feel artificially weighted as we’ve experienced in other performance Audi models. 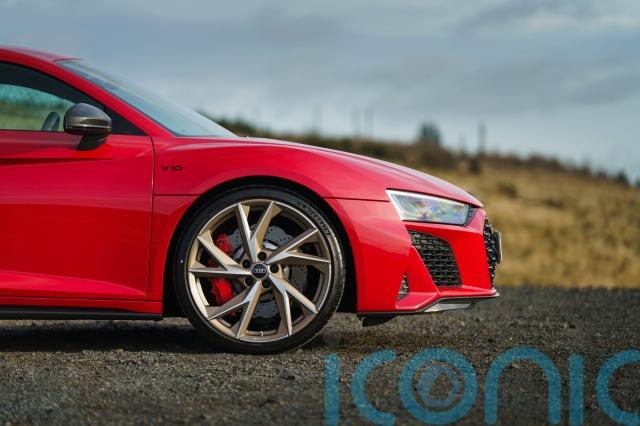 The R8 continues to be a great-looking car – to our eyes at least – with excellent proportions and some real presence. Our particular car came in a striking ‘Tango Red’ colour with contrasting bronze-coloured wheels; it’s one of the nicest specifications of R8 that we’ve seen.

Though some might like the huge wing that you get on quattro Performance models, the more understated looks of the RWD are still very appealing. It’s by no means a wallflower, mind you – this is still a car that turns heads wherever it goes – but the gloss black accents and more streamlined appearance make it feel just a little bit more undercover. 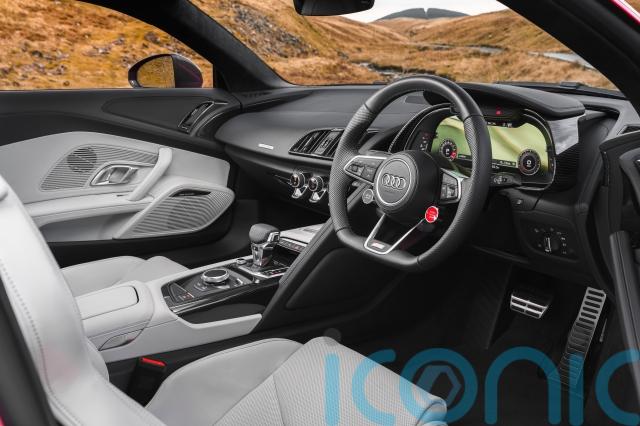 When the R8 first arrived its cabin felt like a real step forward, with its lack of central screen and Virtual Cockpit setup ensuring that the driver was free of distractions. And though that still remains the case, the cabin of the R8 is just starting to feel its age somewhat. Though it’s nice to have physical controls for the heating and ventilation, the whole affair feels a tiny bit off the pace when compared with rivals.

The cabin does offer a surprising amount of space for its two occupants, mind you, while there’s enough room for a weekend’s worth of luggage. At 112 litres housed within the nose of the car, you’ll find more boot space in a compact city car, but it’s useful to have the option. 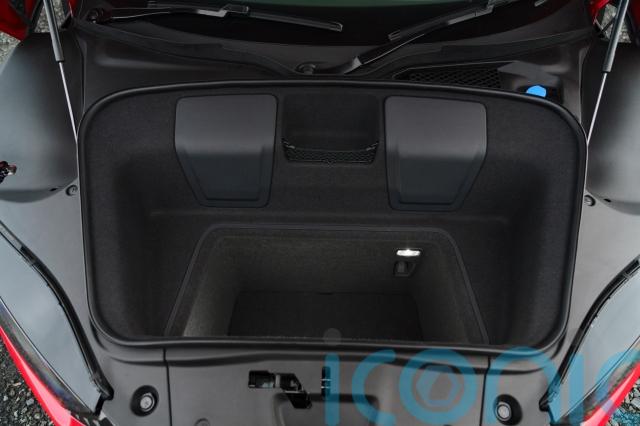 As we mentioned, the R8’s Virtual Cockpit setup felt pretty next-level when it first arrived but these days it’s starting to creak a little. The navigation system isn’t all that detailed while moving around the separate menus is tricky. Apple CarPlay is included, but again, this is a system that thrives on being operated through a touchscreen, so using it via a rotary controller is hard. During our time with the car, the Apple CarPlay could connect a phone call, but for some reason, the microphone in the vehicle wouldn’t pick up our voice.

At just over £150,000 the R8 RWD certainly isn’t cheap, but what you’re really paying for is all that engineering and theatre. It’s a bit of a shame that the in-car tech feels a little off the pace, though.

The R8 might be entering its final years – and it’s predicted that a fully electric successor is on the cards – but this RWD version shows that this is a car to be enjoyed while it’s still here. Though the cabin might be showing signs of its many years in existence, this is a thoroughly enjoyable and usable supercar that really can dive into daily duties without any hesitation.

The V10 might’ve been quietened by regulations, but it remains one of the all-time greats. With the push for downsizing and electrification, it’s something to celebrate while we can.