Longford Town back in action against Treaty United at Bishopsgate 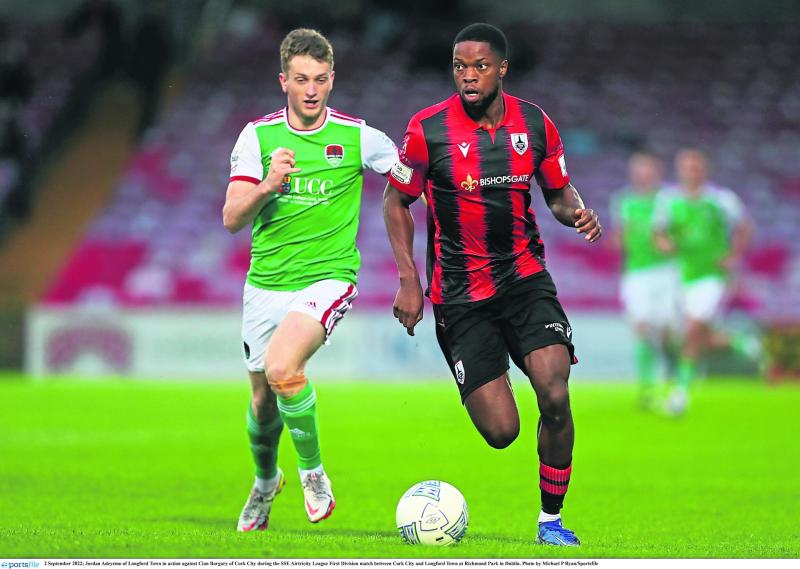 After weeks of inactivity, Longford Town are back in action against Treaty United at Bishopsgate this Saturday, kick-off 4pm.

The game has an early kick-off and this is due to the fact that the Republic are playing Scotland away in the UEFA Nations League in Glasgow, thus giving supporters a chance to watch both games.

You will have to go back to Friday September 2nd for the previous league fixture when we played leaders Cork City at Turners Cross.

The records will show that the game ended 2-2 with the Town having taken the lead in the 13th minute when defender Dylan Barnett scored a majestic goal. Barry Coffey scored both of Cork's goals while also on target for Longford was in form striker Jordan Adeyemo.

The Town have been basically out of football for three weeks and let's hope that doesn't affect them when they take on Treaty United.

There is no doubt that manager Gary Cronin will have his team ready for the final five games and be preparing for the upcoming play-off fixtures which will come after the league finishes at the end of October.

Even though at this stage the Town are guaranteed a place in the play-offs there is no doubt that Gary Cronin will be looking to pick up as many points as possible in those five games.

The great result against Cork is only a memory now and Saturday's game is the only one that matters to Gary Cronin and his squad.

Limerick club Treaty United have done so well since joining the League of Ireland and that is a real tribute to the players and their manager Tommy Barett who is doing a magnificent job.

Last season Treaty reached the play-offs and will be there again this season unless there is a complete collapse as they are nine points ahead of Wexford with four games remaining.

To get through to the play-offs is a fine feat  but reaching the semi-final of the FAI Cup is even a bigger achievement.

On Friday night last they played UCD in the quarter-final at the Markets Field and gave the students a footballing lesson.

The 4-1 scoreline was a deserved result for the home side who dominated the game. Star of the show was striker Enda Curran who scored a hat-trick.

Treaty now take on Derry City in the semi-final at an expected packed house in the Brandywell next month after Derry beat Shamrock Rovers 3-1 in the quarter final after extra-time.

Waterford, who beat Dundalk in the quarter-final, have home advantage in the other semi-final where they meet Shels who had an emphatic 3-0 victory over Bohemians.

The Town have played Treaty three times this season and the Lmerick side have the bragging rights at this stage.

The first two meetings between the club’s home and away ended scoreless but the last meeting at the Markets Field ended 3-0  in favour of Treaty. It was 0-0 at half-time and the Town should have gone in at the break at least a goal or two ahead.

Curran scored his second and Treaty's third in the 83rd minute to give the home side a flattering victory.

The current Treaty squad have many experienced players and a sprinkling of young up and coming players.

There is no doubt that Curran is the real danger man who has the knack of scoring goals. Conor Winn is playing superbly in goal for Treaty and he is keeping former Town keeper Jack Brady out of the starting eleven.

Mark Ludden has years of experience as has Conor Melody and Joel Coustrain and they also have the likes of Success Edogun, Joe Collins, Sean Guerins in a very useful squad.

Let's hope that the Town have a full squad to pick from after the break for the last three weeks. After the Treaty game the Town are away to Athlone and Cobh which leaves the home game v Waterford and away to Galway in the final game of the season at Eamon Deacy Park.

Due to the Republic of Ireland game v Scotland in Glasgow on Saturday night, the kick-off time for the game at Bishopsgate has been changed. The time hopefully will not inconvenience our loyal supporters. Remember kick-off is at 4pm.