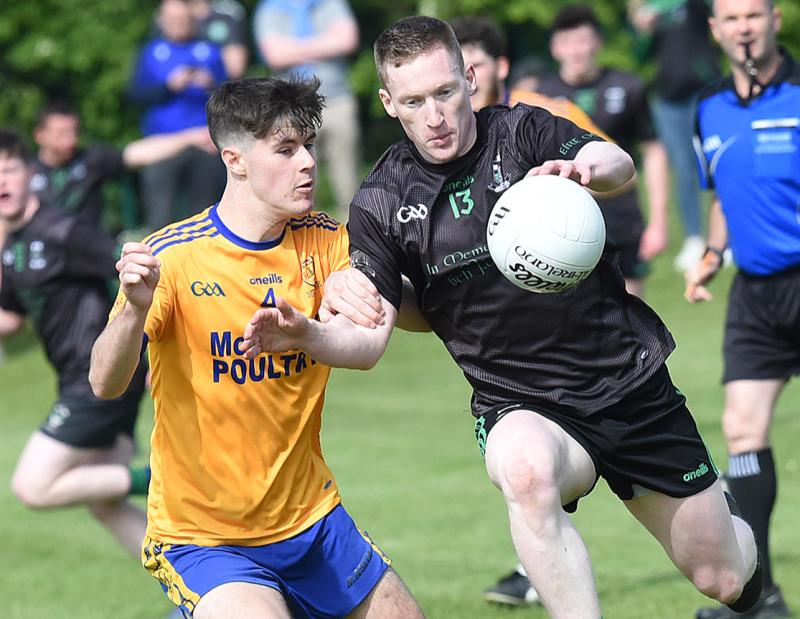 A third-quarter blitz helped Young Irelands overturn an interval deficit before they claimed a four-point victory over Kilkerley Emmets at Pairc Eire Og on Sunday afternoon.

Trailing by two points at half time, the hosts hit 1-5 without reply, including a goal from substitute Leon Duffy Ford to take control of the game.

Dermot Mone opened the scoring for the Young Irelands before Fionn Cumiskey kicked the first of his five points to level matters soon after. The hosts received a boost when Cathal Ferriter pounced for the opening goal on 11 minutes to give his team the early advantage.

However, Kilkerley responded in impressive fashion and replied with a goal from Cathal Bellew and with Cumiskey and Ewan McEnteggart among the point scorers, they went in at the break with a 1-5 to 1-3 advantage.

Young Irelands came out fighting in the second half and Duffy Ford’s goal was added to by five points to see their side move six clear.

The Emmets hit back with points from Cumiskey, McEnteggart and Bellew but it wasn’t enough to save the game as the Dundalk men held out for an important win.

Dundalk Gaels maintained their 100% start to the season with a nine point victory at home to O'Raghallaighs on Saturday evening. The visitors missed out on a chance to go first outright in this unexpected one-sided top of the table clash.

The home team got the first point of the game through Thomas O'Connell before Barry Watters and Sean McCann extended their lead. Cathal O’Hanlon’s side dominated in every department to lead 0-10 to 0-2 at the break. Andrew Curley with the pick of the bunch with a 45-yard drive with the outside of the boot.

A slow start to the second half from the hosts saw the Drogheda men cut the lead to three points scoring 1-2 unanswered, with Ben Rogan finding the net.

Despite the revival, that was as close as it got as the excellent Dylan McKeown added to his tally and substitute Tomas Kavanagh helped himself to two points after coming on.

Clan na Gael picked up two league points at home on Saturday evening with a 14-point victory over O’Connells.

The home side raced into a four-point lead with scores from Robbie Curran, Billy Smith and a brace from Sean O’Hanlon. Robert Quigley got the visitors on the board with a point, but the Clans increased their lead with a point from Shane Carroll and a goal from Smith.

The sides shared the next four points to leave the score 1-7 to 0-3 after 15 minutes. Two frees from Smith put his team further ahead, but the Bellingham side landed the next three points from Stuart Osborne and two from Quigley to leave six between the sides.

Four points in a row from Jason Cullen, Carroll and two frees from Curran opened a ten-point gap. O’Connell's got the last two points of the half, both frees from Niall Conlon to leave the score at the break 1-13 to 0-8.

O’Hanlon got the first point of the second half and a couple of minutes later he got his first goal of the game when the visitors’ keeper dropped a high ball and he knocked the rebound to the net. The Bellingham men replied, going straight up the field before substitute Dean Stanfield finished a Jackie Agnew pass to the net.

Points from Conlon and Quigley reduced the margin to seven, however four answered points from the Dundalk side made sure there was going to be no come back.

Conlon got his team’s last point of the game before a third goal for the Clans from Mark McGeown and a point from O’Hanlon wrapped up the victory for the Ecco Road side.

Goals from Shane Byrne and Glen Stewart helped Roche Emmets maintain their impressive start to the season with a three-point victory over St Josephs.

The Joes travelled to Pairc de Roiste on Saturday evening as joint leaders having won their opening three games. However, despite a late rally they were unable to continue that run as the hosts held out for a deserved win.

The first half was relatively even in terms of scoring chances but the goals from Byrne and Stewart were vital as Roche took charge of the game. At the break they had established a 2-4 to 0-6 lead with Conall Smyth and Jack Mulligan on target for the Joes.

The Faughart side strengthened their grip on the game after the restart when they added four points to lead by 2-8 to 0-7 at the end of the third quarter.

The Cluskey Park men refused to give up and battled back in the closing stages with five points of their own. However, Roche stood strong in the dying minutes to claim a win that sees them move into second place in the table.

Hunterstown Rovers had to hold off a spirited Oliver Plunketts second half fightback as the Mell Road men remain rooted to the bottom of the Division 2 table. Colm Murphy was the star of the opening half with two goals.

The corner forward’s industry had the home side in pole position before half time as Colm Donnelly’s men led 2-9 to 1-2 going in for refreshments. Glen Matthews also impressing in a ferocious first half start for Rovers.

Conor Haggans buried two penalties on the night for the Drogheda men. His first, at the beginning of the game and one at the end of second half made the hosts sweat momentarily. Stephen Keeley scored one in between for the understrength visitors.

Hunterstown would hold on thanks to Jamie Ward’s fine finish that saw them get back to winning ways after two losses on the trot.

A late smash and grab victory saw St Finbarrs pick up their first win of the season against parish rivals St Kevin’s in a feisty affair at Philipstown.

Eight points down with eight minutes to play, the visitors saw Jack Butterly and Adam Hanratty find the net in the finish to dramatically swing the tie in the previously winless side’s favour.

The turnaround didn’t look likely at half time when St Kevin's were 2-8 to 0-9 ahead and full value for the margin thanks to two goals from Cian Callan and the impressive Lee Crosbie from frees. But Naomh Fionnbarra had other ideas.

Plans for ten new apartments in centre of Ardee