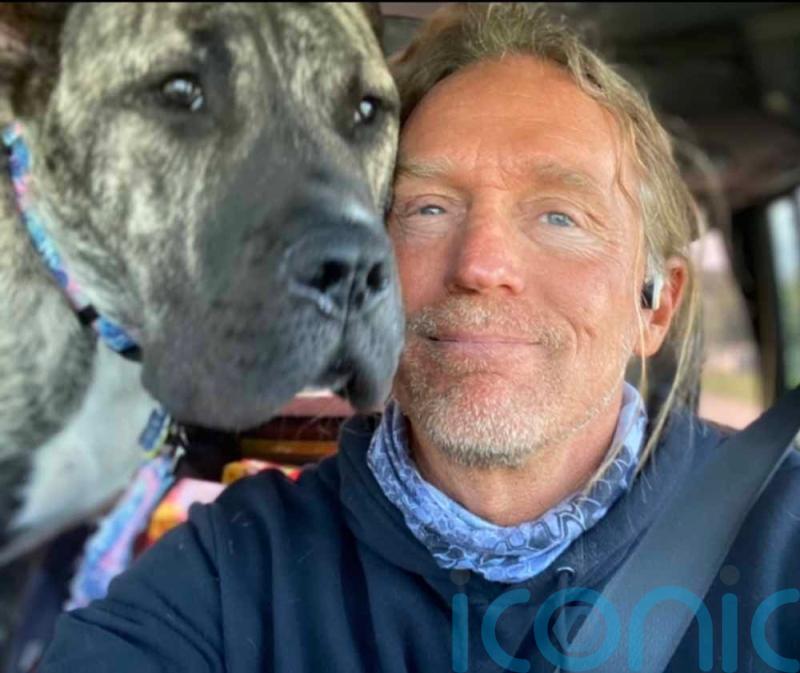 An abandoned dog who was found so emaciated he was “just 30 minutes from death” is now living it large as a canine beer taster.

Weighing just 3st instead of the 6st recommended for his Spanish mastiff breed and covered in pressure sores when he was found dumped in a car park in 2021, two-year-old Ethan is now the centre of dad-of-three Jeff Callaway’s family.

Unable to walk, lift his head, eat or drink, after suffering untold cruelty, 16 months later Ethan is thriving as chief tasting officer for doggy ‘beer’ company Busch, a job for which he is paid $20K (£16K), receives a year’s free pet insurance and is given free beers. 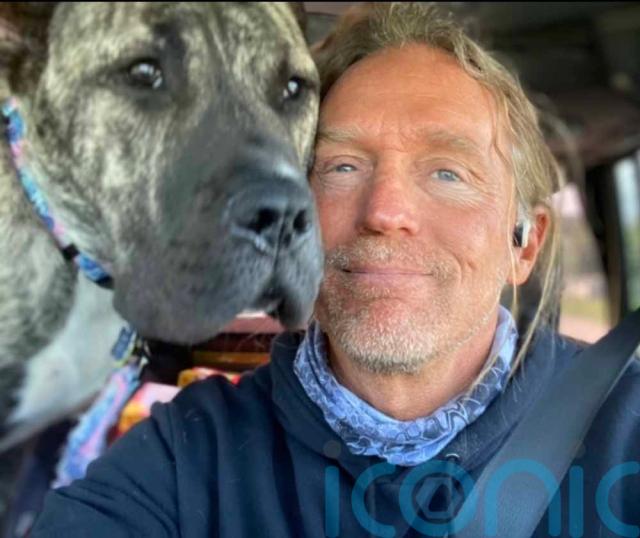 Kentucky Humane Society facilities manager, Jeff, 50, who lives in Louisville, Kentucky, USA, and is married to cleaning company boss Donna Callaway, 40, said: “Ethan has touched so many people with his incredible story of survival.

“He has a spark in him. Even when he was abused and dumped, it never died out. The flame has just got bigger and bigger and it has ignited a movement of kindness.”

A massive animal lover,  Jeff – dad to Presley McLaren, 27, Elijah Callaway, 23, and Hanna Callaway, 20, and stepfather to Mason Timberlake, 16, and Charity Timberlake, 13 – recalls how Ethan was initially thought to be dead when he was found.

He said: “It was a cold January day in 2021. It had snowed and was minus four degrees.” 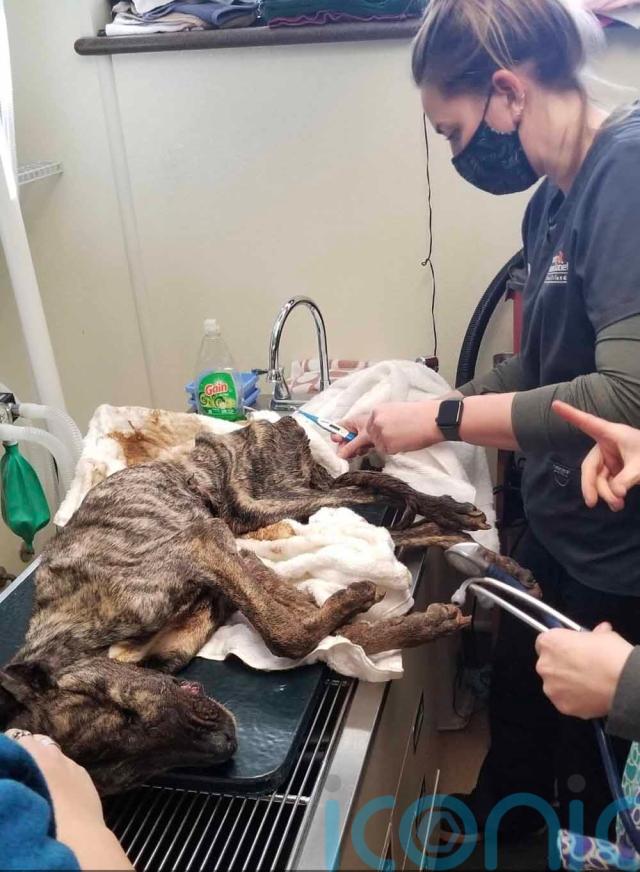 He added: “Someone drove by and spotted Ethan abandoned in the parking lot, so one of the employees rushed out and brought him to the veterinary area.

“I’d been warned someone had dumped a dead dog outside, so we were all wondering why they’d brought a dead dog in to the vets. Then he took a breath.”

Skeletally thin, Ethan began having seizures. Unable to stand or walk, as he was so weak, he was covered in pressure sores, indicating he had been kept in a small space, unable to move freely.

Jeff explained: “Ethan was so dehydrated that the vet had to use a kitten IV needle to get fluids in to him.” 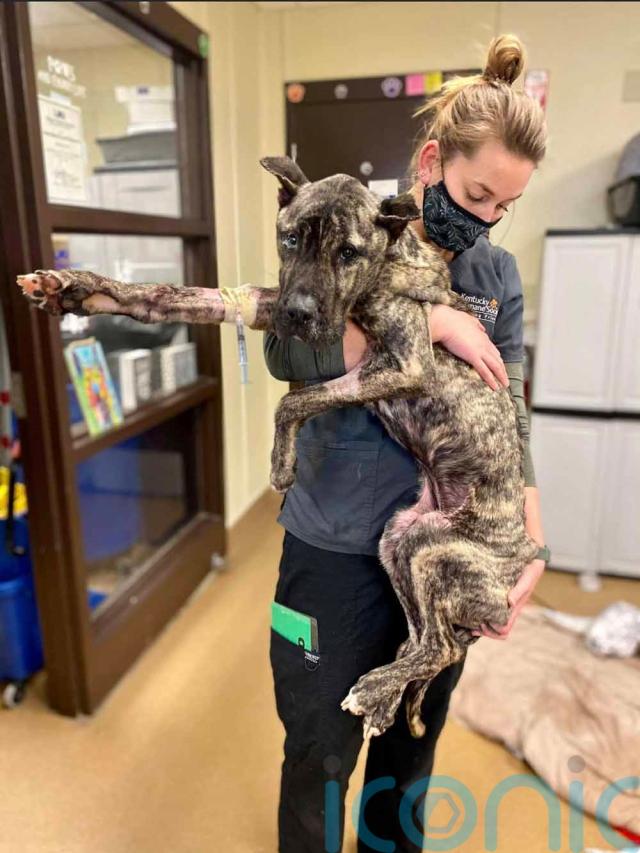 He continued: “They said he was just 30 minutes from death when he was found. Our vet said he was the thinnest dog he’d ever seen alive and was actively dying.

“But he had some fight in him and wanted to get better.”

Ethan was taken to the nearby Jefferson Animal Hospital, where vets managed to stabilise him over the next five days, before returning him to the Kentucky Humane Society.

After meeting him for the second time on February 4, Jeff said: “Ethan still couldn’t walk at that point.” 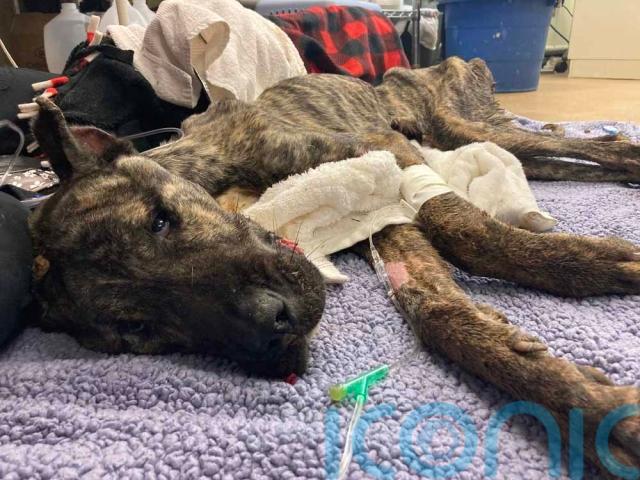 He added: “When I saw him I had an immediate connection with him.

“It didn’t seem like he was going to live, but I knew straight away that he was my dog and I would do anything to help him survive.”

The vets then named the dog Ethan, which means strong-willed in Hebrew.

And, discovered by vets to then be eight-months-old, he has been true to his name. 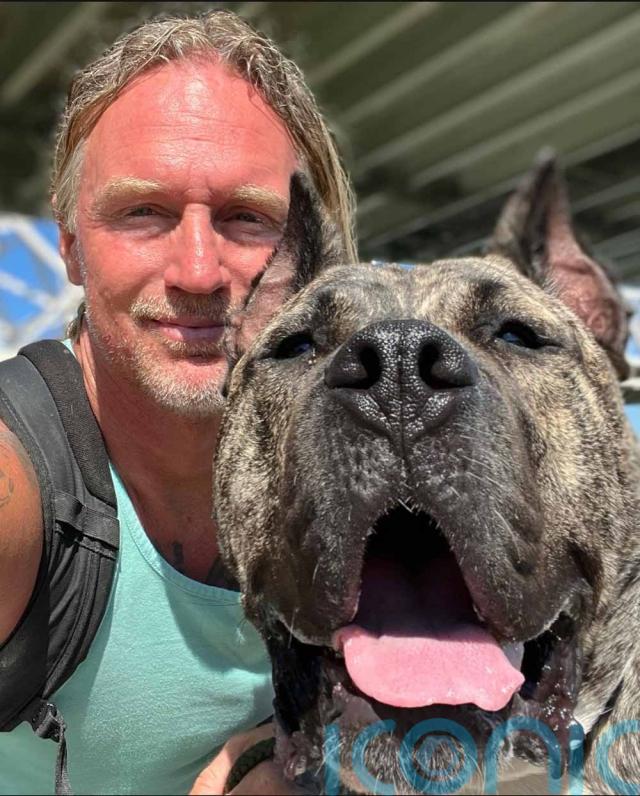 Jeff said: “I came in to see him the very next day and he was up and walking. It really surprised me.

“He gave me a big wet kiss. I felt like he knew I was there to help him and he could trust me.”

Jeff then volunteered to work nights for the next two weeks, with his family’s full support, so he could watch Ethan.

He recalled: “His body was in bad shape, but his mind also needed to heal. I started to play games with him, like playing fetch.” 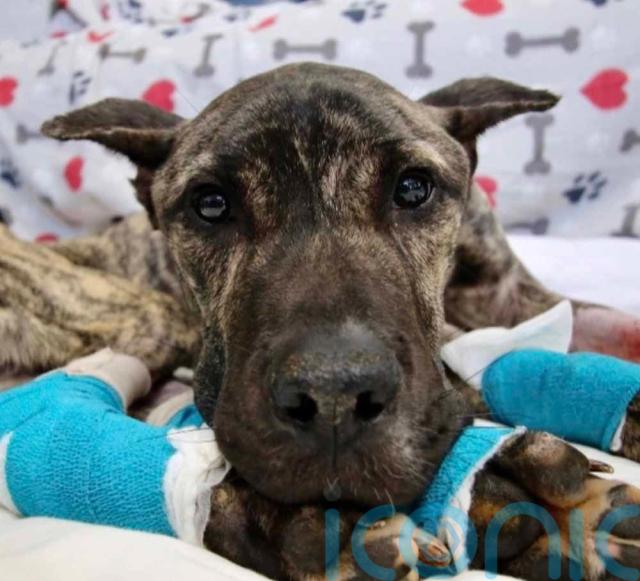 He continued: “I’d come in at night to feed him and clean him up and he would lower his head into my chest like he was giving me a hug.

“He’d come from such a background of abuse and neglect that he’d never had a chance and probably never been mentally stimulated.

“The whole team worked so hard that our shelter vet, Dr Emily Bewley, was given an award for veterinarian of the year in Kentucky for her care of Ethan.”

Despite already having five dogs and four cats – all of them rescued – at home, Jeff and his family made room for Ethan, who he officially adopted on March 10, 2021. 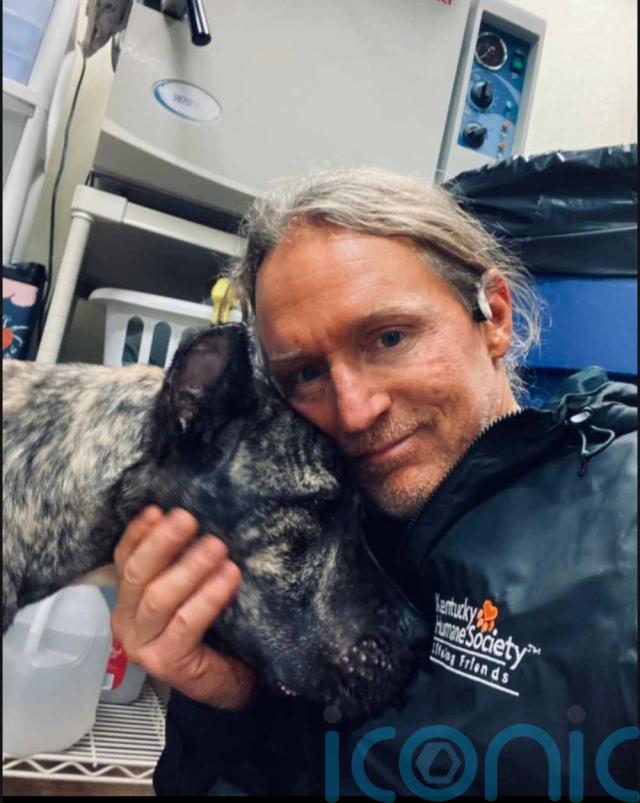 Jeff even spent $3,000 (£2,490) and three weeks building a special animal room in his five bedroom house for Ethan and his four legged chums.

He explained: “I built an extra room in our house, because we needed extra space for all these animals and it’s become Ethan’s room really.

Like a small den, it has an elevated dog bed, a couch, another dog bed, a TV and on one wall, there are pictures, paintings and plaques dedicated to Ethan.

Since finding his forever home, Ethan has gained weight and grown in confidence. 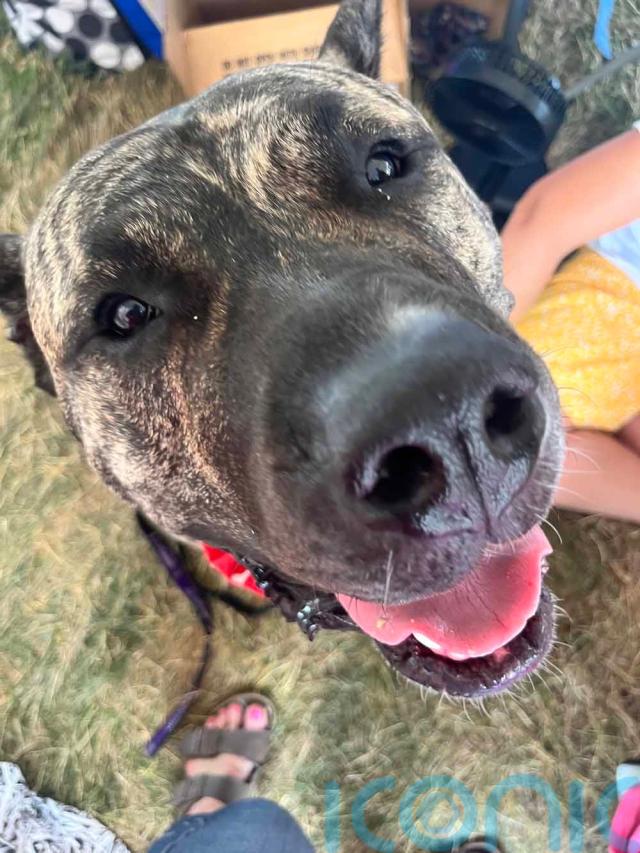 He goes to work with Jeff every day and visits senior living facilities and therapy centres to help people recover using animal therapy.

While Ethan is still dealing with the impact of brain lesions due to his dehydration and malnutrition, he is now a happy two-year-old.

Jeff said: “When he came to our home, it’s like a switch flipped and he felt like a dog again. It was that day I saw him run and bark for the first time.

“It’s like he found himself. He just needed time and love to get better.” 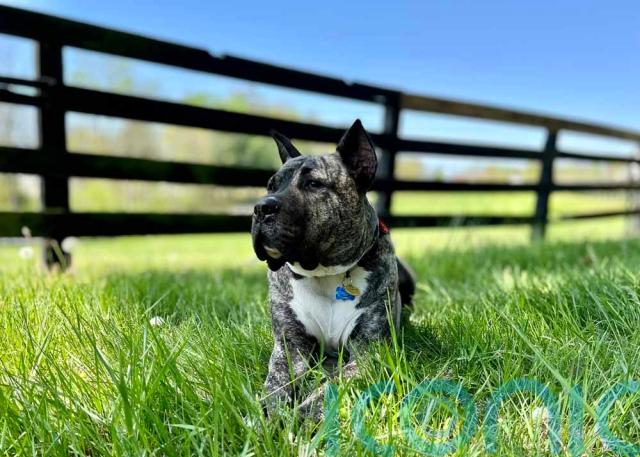 He added: “He’s now such a funny little dog, he’s an entertainer. He loves to pose for photos and puts on a little show when people come to see him.”

Jeff says Ethan’s story has inspired people from across the globe.

He said: “We get so many messages from people who say Ethan’s recovery has helped them deal with their own lives. He’s inspiring.

“The kid that found Ethan didn’t just save his life that day, he saved many more.” 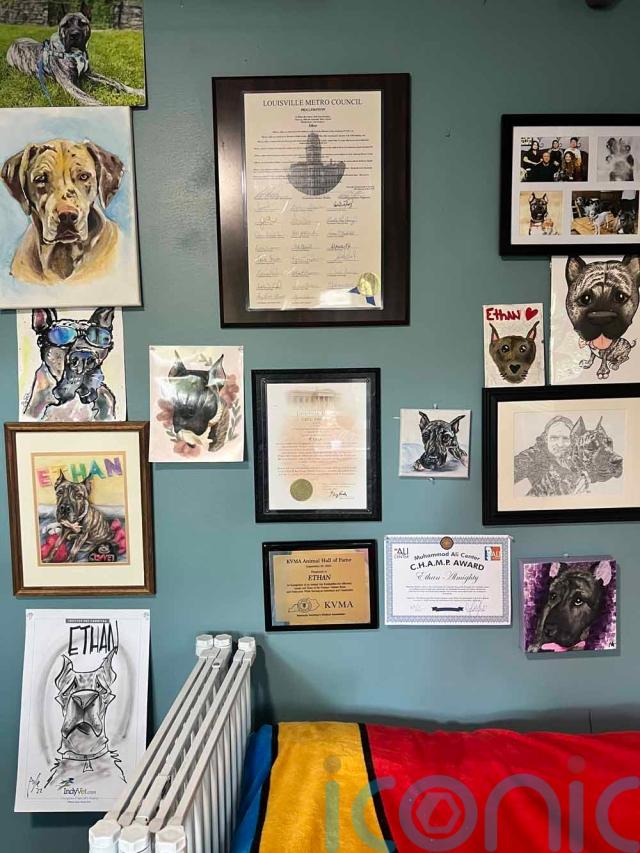 The Spanish mastiff’s story was deemed so inspiring that he was chosen from hundreds of other canine candidates when Jeff put him forward for the role as chief tasting officer for doggy beer company Busch – which creates drinks for pooches – in May 2021.

Ethan is also in the running for a American Humane Association Hero Award, and is currently a semi-finalist in the shelter category.

“One woman messaged me to say she had cancer and was scared to start treatment. She came to meet Ethan and was so inspired she began treatment and is now cancer-free.” 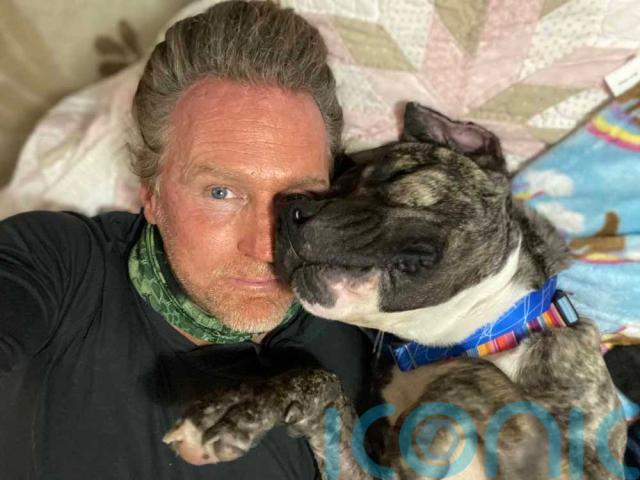 He continued: “He’s changed me too. He has made me so much more confident and has shown me the true meaning of love and empathy.