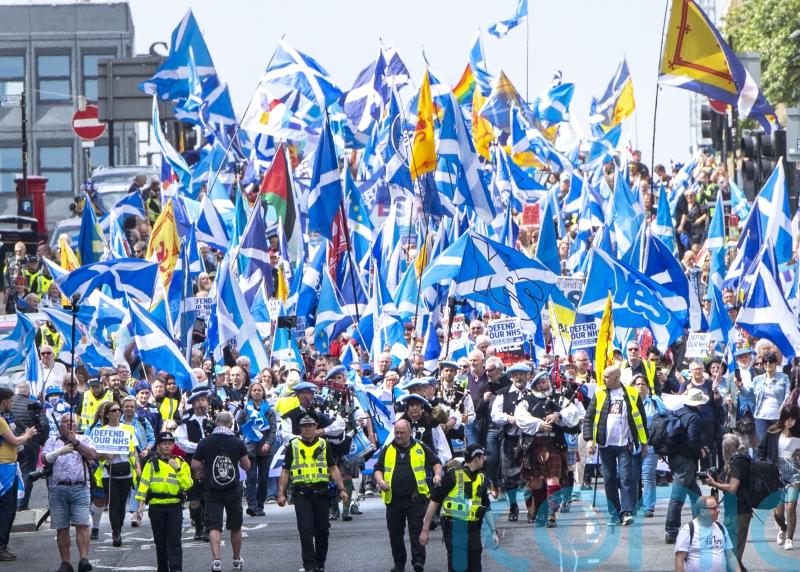 A major survey used to gauge the attitudes of people across the UK has found the Union “has become decidedly less popular” in Scotland.

The British Social Attitudes poll attempts to discover the prevailing feelings in the UK on a number of topics, Scottish independence among them.

In its most recent incarnation, published on Thursday, 52% of the 1,365 respondents supported independence becoming Scotland’s governing structure, up one percentage point since the last survey in 2019.

However, fieldwork for the survey was undertaken in September and October last year.

But the survey shows the shifting attitudes in Scotland through the years, with support for independence rising from 27% in 1999 to 33% in 2014 – in the weeks ahead of the referendum on Scottish independence – and eventually rising to 52% last year.

The time series also showed a drop in support for devolution as the governing structure in Scotland, from 59% in 1999 to 50% in 2014 and a further drop to just 38% last year.

Support for not having a Scottish Parliament has remained roughly at the same rate, falling from just 10% in 1999 to 8% last year, although the figure peaked at 17% in 2004, the survey suggested.

The authors of the report, who included polling expert Professor Sir John Curtice, pointed to the 2014 referendum and Brexit as factors for the increase in support in the past decade.

They said: “Since 2014 there has been a marked increase in the level of support for independence, and especially so since the EU referendum of 2016, after which leaving the UK became more popular than devolution for the first time.

“Against this backdrop, it is perhaps not surprising that Scotland’s constitutional status should have become an issue of lively debate once more.

“The Union has certainly become decidedly less popular north of the border.”

A recent poll by Panelbase for The Sunday Times of 1,010 Scots found support for independence trailing the Union by 51% to 49% when undecided voters were removed.

He added: “Because of Westminster control over Scotland we are subject to a Tory party moving ever more to the right – apparently planning to scrap the cap on bankers’ bonuses while the vast majority of people take a hit to their living standards because of Brexit.

“Independent European countries similar to Scotland are wealthier and fairer than the UK, so why not Scotland?”

“A majority of Scots don’t want to be divided all over again and are instead looking for the SNP-Green Government to focus on their real priorities,” he added.

“Referendums by their very nature are divisive – it’s time for SNP ministers to start concentrating resources on the cost-of-living crisis and other major issues like the NHS, schools and the economy.”