The Duchess of Cornwall has called Strictly Come Dancing champion Rose Ayling-Ellis a “star”, adding that her family had voted for her on the BBC One show – while on a visit to the set of EastEnders.

Charles and Camilla were guided around Albert Square on the Elstree set before meeting the soap’s cast and crew who had finished filming an episode in honour of the Queen’s Platinum Jubilee.

Deaf actress Ayling-Ellis, who plays Frankie Lewis in the show, presented Camilla with a bouquet of flowers, adding that it was an “honour” to meet the duchess.

Camilla, who was wearing a silk dress and cream coat by Anna Valentine, said: “Rose, the Strictly star.

“I said we were all voting for Rose, I don’t know how you did all those dances.”

Ayling-Ellis then asked if the Queen watched Strictly, to which Camilla said: “I think she does. She probably watched you. You have to find out.” 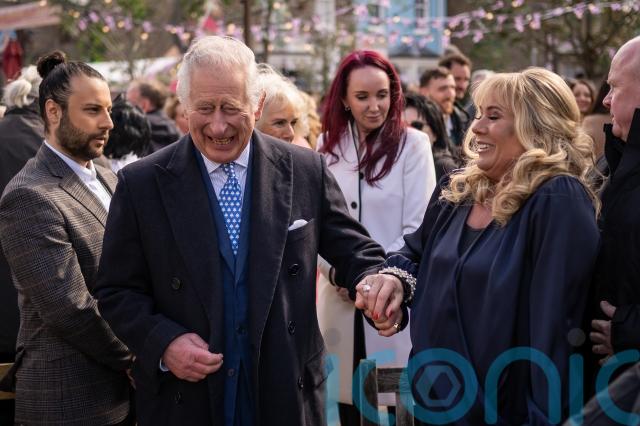 After the meet-and-greet, the actress told the PA news agency: “It was really funny because she’s a huge fan of Strictly Come Dancing and she mentioned that she voted for me which is so lovely, and her grandchildren watch it.

“It is amazing, so lovely. I mean come on, its the royal family voting for me, sometimes you forget how many people watch the show, I am mind-blown.”

A special moment came during a group photograph of the cast and crew alongside the royals.

Letitia Dean, who plays Sharon Watts in the soap, said to the Prince of Wales: “You’ve got your coat on, very wise” which prompted Charles to take his jacket off and place it around her shoulders.

The chivalrous act was met with a round of applause. 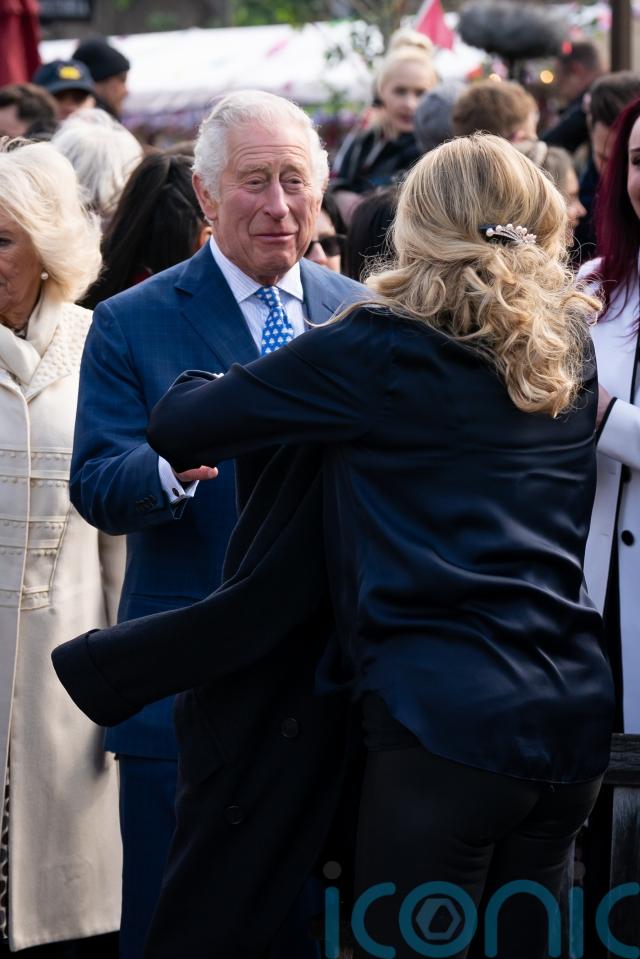 Dean, who appeared in the first episode of the soap in 1985, later told him: “Thanks for lending me your coat, it smelt rather lovely.”

She then presented Charles with a street sign of Albert Square covered in cast signatures, alongside Steve McFadden who plays Phil Mitchell.

He told Charles: “On behalf of the cast, we hope it hangs on the mantelpiece.”

The royal couple were shown around the new set of EastEnders, which was originally due to be finished in 2018. 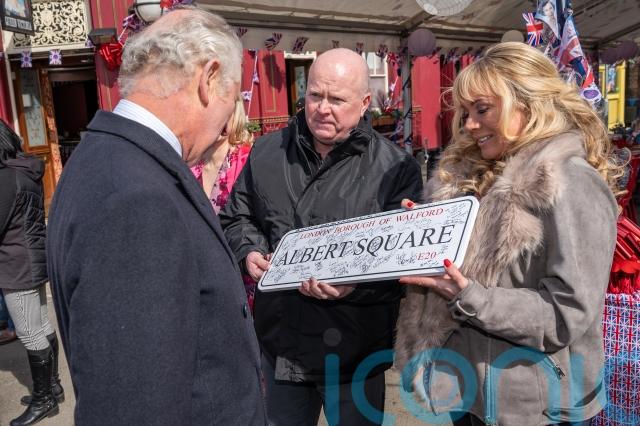 During the meet-and-greet, Camilla told actress Gillian Taylforth, who plays Kathy Beale, that she used to watch her on EastEnders when it first aired.

Taylforth told the PA news agency: “She said we were a lot younger then, and that it’s nice to see the old faces. I said I was in it for 15 years and then left and came back from the dead.

“She said: ‘I remember Angie and Dirty Den, I’ve got a few more episodes to catch up on,’ and Brian (Conley) said ‘we’ll get you a box set’.

“It’s just so exciting, we were all standing around the corner and we were all having fun, laughing and joking and when they said they’re on their way suddenly I said: ‘My stomach is going right jelly wobbles.’

“What a wonderful thing, what a lovely, lovely couple.” 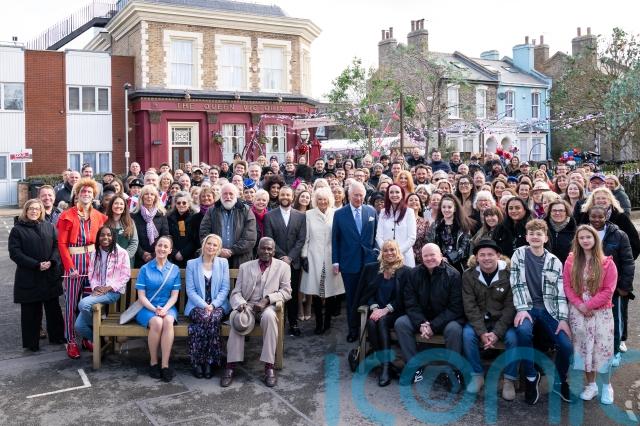 Brian Conley, who plays Terry Cant in the soap, was wearing a union jack suit in honour of the Queen’s jubilee.

After speaking with Camilla, he told the PA news agency: “I explained I am wearing a nylon costume and she said she had handwarmers inside her gloves and didn’t want to shake my hand too hard in case I caught on fire with all the static, which was very funny.

“It’s not like they dashed in and dashed out, they spent much time here meeting everyone, not just in front of the camera but behind.” 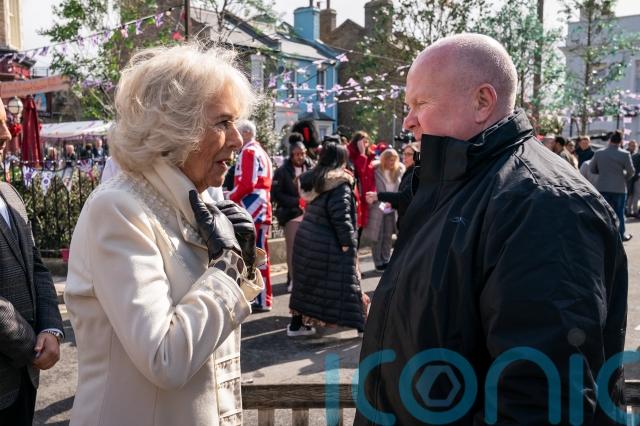 Danny Dyer, who plays Mick Carter in the show, also met Camilla, explaining that he will be exiting the show after nine years.

“I used to make movies before moving into soap-land, but I’m leaving this year… Maybe I will come back, who knows,” he said.

Camilla asked Dyer about his exit storyline, to which he said: “Tune in, it’s going to be a big one.”

Later, Dyer admitted he did not speak to Charles about his Who Do You Think You Are episode, which found he was related to royalty. 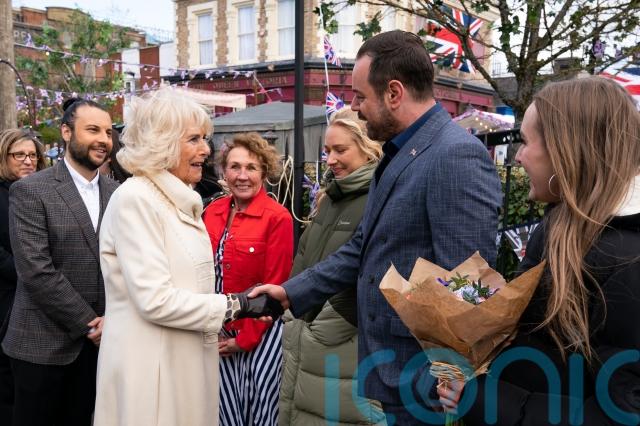 He said: “It just don’t go down well does it? I don’t think they’d believe me. I met Charles before and I dropped it in, he just looked at me strange but I suppose we are related.

“Very random to see the royals, you know, up close they were very charming, really chatty, they’ve got mad faces when you’re close.

“So excited to have them here, meet them and introduce them to the Square.” 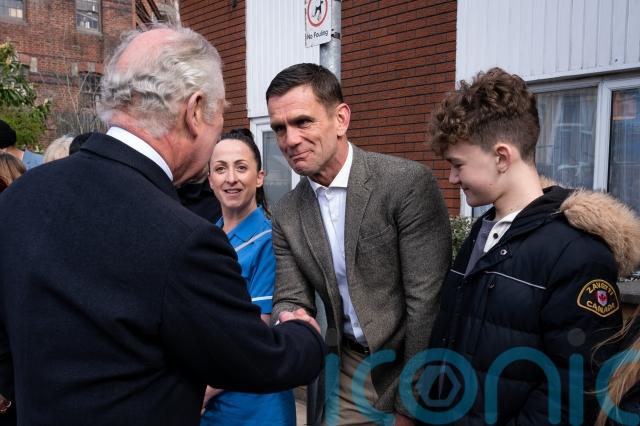 “I mean everybody has gone through a pandemic the last few years, it is just a nice thing to be able to do something like this again.”

After meeting with Charles, Natalie Cassidy, who plays Sonia Fowler, told the PA news agency that he was “so personable and lovely”.

“I just said sometimes it’s easier being 10, you don’t really know what you’re coming into, and we had a bit of a laugh and he was really, really lovely. 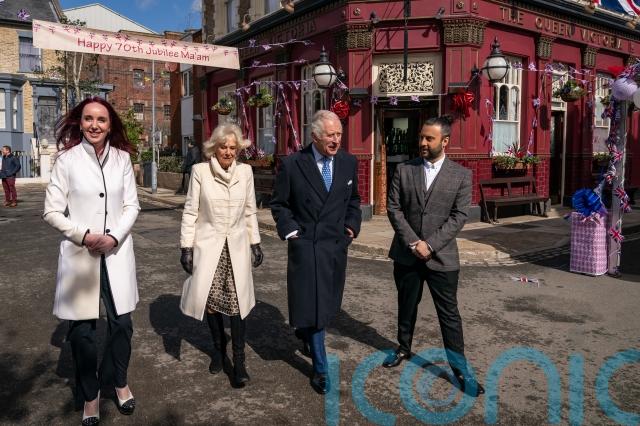 “Actually Camilla, although I didn’t meet and greet her, she actually came over and made a beeline to me to say: ‘I know you, you’ve been in it a long time haven’t you?’ so that was really sweet.

“They were very interested in all aspects and I think that is what’s amazing about them, they make every conversation seem fresh,” she added.

Tameka Empson, who plays character Kim Fox, added that Charles commented on the feather boa she was wearing, and asked: “What happened to the chicken?”

The royal visitor stepped behind the Queen Vic, strolled around Albert Square and through the EastEnders street market, meeting stars of the show.